The Likelihood of Massive Exomoons

Are there large moons — perhaps Earth-sized or even bigger — around gas giant planets in habitable zones somewhere in the Milky Way? It’s a wonderful thought given how it multiplies the opportunities for life to find a foothold even in systems much different from our own. Centauri Dreams regular Andrew Tribick recently passed along a new paper that addresses the question in an interesting way, by modeling moon formation and orbital evolution under widely varying conditions of circumplanetary disk composition and evolution.

We’re entering new terrain from this site’s perspective, because I can’t recall going deeply into circumplanetary disks before, at least not in the exoplanet context. But Marco Cilibrasi (Università di Pisa, Italy) and colleagues take us through the necessary background issues. We have two primary models for giant planet formation inside a protoplanetary disk, one being core accretion, when collision and coagulation occurs among dust particles to build up a planetary embryo. The other is gravitational instability, when a gaseous clump collapses into a planet.

We learn from Cilibrasi et al. that both of these approaches to gas giant formation predict that circumplanetary disks will form around planets in the latter stages of their formation. Here we have to be cautious, because circumplanetary disks do not track precisely with the behavior of their larger cousins around stars. The circumplanetary disk (CPD) receives a constant influx of gas and associated dust from the upper layers of the protoplanetary disk, the result of gas accretion onto the forming gas giant. We can take the moons of Jupiter as our local analog of this process. Indeed, understanding a CPD is crucial to make sense of moon formation. 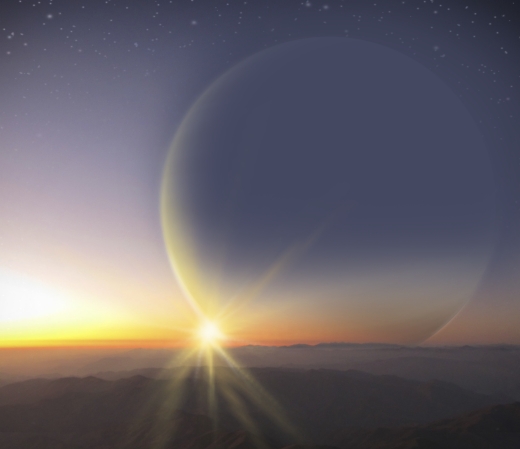 Image: An artist’s rendition of a sunset view from the perspective of an imagined Earth-like moon orbiting the giant planet, PH2 b (a planet confirmed by the Planet Hunters project). The scene is spectacular, but how likely is it that gas giants would have moons beyond Mars size? The answer to the question awaits further work in exomoon detection, but the Cilibrasi paper sees massive moons as a serious possibility. Credit: H. Giguere, M. Giguere/Yale University.

A few interesting things about the Galilean moons: We know that Io is rocky, while the three outer satellites contain a good deal of water ice. The paper points out that icy satellites can only emerge from a circumplanetary disk with temperatures that have dropped below the water freezing point. But simulations of such CPDs show temperatures as high as several thousand Kelvins. This is an indication that the Galilean moons must have formed very late in the process, when Jupiter had substantially cooled and the circumplanetary disk was beginning to dissipate.

Cilibrasi and colleagues performed hydrodynamic simulations that varied the conditions in the circumstellar as well as circumplanetary disks. 20,000 systems were put into play to study the formation, migration and further accretion of the resulting ‘satellitesimals.’ What happens is striking, for because of the continuous influx of dust from the CPD, high-mass satellites form and migrate into the planet, polluting its atmosphere with metals. From the paper:

Our results show that the moons are forming fast, often within 104 years (20 % of the population), which is mainly due to the short orbital timescales of the circumplanetary disc. Indeed the CPD completes several orders of magnitude more revolutions around the planet than the protoplanetary disc material can do around the star at the location of Jupiter. Due to the short formation time, the satellites can form very late, about 30% after 4 dispersion timescales, i.e. when the disc has ∼ 2% of the initial mass.

During this period of formation, the circumplanetary disk continues to cool off, finally allowing icy moons to form. In fact, the Cilibrasi simulations show that 85 percent of surviving moons contain water ice. The authors found that the satellites lost to the forming planet account for 0.3 Earth masses on average, up to 10 Earth-masses in some cases, thus contributing to the abundance of heavy metals found at Jupiter. But the high mass of the satellites formed by these simulations is an encouraging result.

Even though surviving satellites form late, when the circumplanetary disk has dwindled to about 2 percent of its initial mass, the moons that form out of this late process can be massive, as the paper notes, a distribution “peaking slightly above Galilean masses, up until a few Earth-masses.” This should put the moons around close-orbiting gas giants within range of projects like the Hunt for Exomoons with Kepler. As for exomoons in a habitable zone and the interesting astrobiological implications they offer, we can hope that future breakthroughs in instrumentation will allow us to test these findings.