I was pleased to be a guest on David Livingston’s The Space Show last week. David’s questions are always well chosen, as were those of the listeners who participated in the show, and we spoke broadly about the interstellar effort and what it will take to eventually get human technologies to the stars. The show is now available in David’s archives.

I suspect that if David and I had spoken a couple of days later, the topic would have gotten around to gravitational microlensing, and specifically, the news about planets in other galaxies. On the surface, the story seems sensational. In our own galaxy, we can use radial velocity and transit studies on stars, but here our working distances are constrained by our method. The original Kepler field of view in Cygnus, Lyra and Draco, for example, contained stars ranging from 600 to 3000 light years out — get beyond 3000 light years and transits are not detectable. 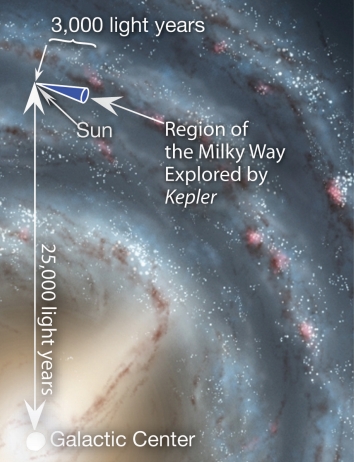 Image: The Sun is about 25,000 light years from the center of the galaxy, about half the distance from the center to the edge. The blue cone shows the region of the Milky Way that Kepler explored for planets. Kepler looked along a spiral arm of our galaxy. The distance to most of the stars for which Earth-size planets can be detected by Kepler is from 600 to 3,000 light years. Less than 1% of these stars in the region are closer than 600 light years. Stars farther than 3,000 light years are too faint for Kepler to observe the transits needed to detect Earth-size planets. Credit: NASA/JPL-Caltech/R. Hurt (SSC).

Gravitational microlensing, in which a star moves in front of a more distant star so that light from the background object is distorted by the foreground star’s gravitational field, can turn up distant planets within our own galaxy. In fact, it’s quite a useful tool because it is not limited by line of sight — no planet needs to transit — and is not dependent on the planet’s distance from its star.

Microlensing has allowed us to find planets thousands of light years away, near the center of the Milky Way. We see the pattern of the microlensing event temporarily disrupted by a spike of brightness as the planet around the closer star causes its own gravitational disruption.

But how do we hope to find planets billions of light years away? At the University of Oklahoma, Xinyu Dai and Eduardo Guerras have tackled the question using data from the Chandra X-Ray Observatory, working with microlensing models calculated at the university’s Supercomputing Center for Education and Research. Their work revolved around the microlensing properties of a supermassive black hole at the center of quasar RX J1131–1231. The background quasar, about 6 billion light years away, is what is being lensed by the foreground galaxy, which is 3.8 billion light years out.

We are dealing with what is known as a quasar-galaxy strong lensing system, one in which a background quasar is being gravitationally lensed by a foreground galaxy. The result is that multiple images of the quasar form, as seen in the image below. The light from the background quasar crosses different locations in the foreground galaxy, and is lensed as well by nearby stars in the lens galaxy, an effect called quasar microlensing. The latter is a useful tool, for astronomers have used it to study accretion disks around supermassive black holes at the center of quasars. It can also provide information about the lensing galaxy itself. 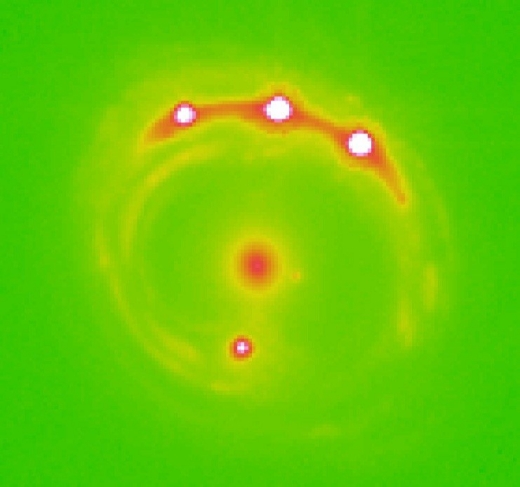 Let’s turn to the paper, where the relevance of this to extragalactic planets emerges:

As we probe smaller and smaller emission regions of the accretion disk close to the event horizon of the SMBH, the gravitational fields of planets in the lensing galaxy start to contribute to the overall gravitational lensing effect, providing us with an opportunity to probe planets in extragalactic galaxies…

The authors analyze the Einstein ring created by lensing effects to show that emissions close to the Schwarzschild radius of the central supermassive black hole of the source quasar will be affected by planets in the lensing galaxy. Thus we have a way of identifying a population of planets in another galaxy, though not planets orbiting a central star. For the paper goes on:

We have shown that quasar microlensing can probe planets, especially the unbound ones, in extragalactic galaxies, by studying the microlensing behavior of emission very close to the inner most stable circular orbit of the super-massive black hole of the source quasar. For bound planets, they contribute little to the overall magnification pattern in this study.

These planets would be, in other words, so-called ‘rogue’ planets not associated with any star, for bound planets of the kind we are used to studying with radial velocity and transit methods would be below the threshold of detection — they would not change the magnification patterns being observed.

These numbers, Dai and Guerras note, are consistent with theoretical studies showing a large population of unbound planets in our own galaxy. Stanford’s Louis Strigari and colleagues, for example, have found that there may be up to 105 compact objects per main sequence star in the Milky Way, using evidence from microlensing as well as direct imaging. Our galaxy may, in other words, be well populated with such objects, most of these relatively small but some larger than Jupiter. See Island Hopping to the Stars for more on Strigari’s work.

What to make of all this? Before this work, the only evidence for an extragalactic planet was the microlensing event PA-99-N2, detected in 1999, and consistent with a star in the disk of M31, the Andromeda galaxy, lensing a background red giant. A planet of 6 times Jupiter’s mass is one explanation for the lensing profile, but there is no way to confirm the possible planet.

Now we have not the detection of individual planets but a hypothesis that lensing data of a galaxy 3.8 billion light years away can be explained by the presence of a population of unbound planets and other compact objects much smaller than planets. The idea that there would be planets in other galaxies is hardly unusual, given their numbers in our own Milky Way. But it’s an exciting thought that we can now begin to study extragalactic exoplanets, even if we’re extremely early in the process and there is much to be learned. As the paper notes:

It is possible that a population of distant but bound planets (Sumi et al. 2011) can contribute to a significant fraction of the planet population, which we defer to future investigations. Because of the much larger Einstein ring size for extragalactic microlensing, we expect that two models, the unbound and the distant but bound planets, can be better distinguished in the extragalactic regime.