This week offers two interesting papers about the TRAPPIST-1 planets, one from Hubble data looking at the question of hydrogen in potential planetary atmospheres, the other drawing on data from the European Southern Observatory’s Paranal facility as well as the Spitzer and Kepler space-based instruments. We’ll look at the Hubble work this morning and move on to the second paper tomorrow. Both offer meaty stuff to dig into, for we’re beginning to characterize these seven planets, which form a unique laboratory for the study of red dwarf systems.

Published in Nature Astronomy, the Hubble results screen four of the TRAPPIST-1 planets — d, e, f and g — to study their potential atmospheres in the infrared, using Hubble’s Wide Field Camera 3 in data collected from December 2016 to January 2017. The data allow us to rule out a cloud-free hydrogen-rich atmosphere on three of these worlds, while TRAPPIST-1g needs further observation before a hydrogen atmosphere can be conclusively excluded. 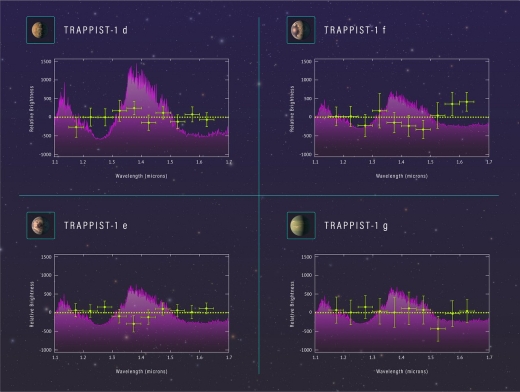 Image: These spectra show the chemical makeup of the atmospheres of four Earth-size planets orbiting within or near the habitable zone of the nearby star TRAPPIST-1. The habitable zone is a region at a distance from the star where liquid water, the key to life as we know it, could exist on the planets’ surfaces. To obtain the spectra, astronomers used the Hubble Space Telescope to collect light from TRAPPIST-1 that passed through the exoplanets’ atmospheres as the alien worlds crossed the face of the star. Credit: NASA, ESA, and Z. Levy (STScI).

Pay particular attention to the purple curves in the above image. These show the signature we would expect to see from gases like water and methane, which would be found if any of these planets had a hydrogen-dominated atmosphere like Neptune’s. The spectroscopic signature should be strong in the near-infrared. The Hubble results are indicated by the green crosses, clearly showing no evidence of such an extended atmosphere for TRAPPIST-1 d, f and e.

Julien de Wit (Massachusetts Institute of Technology), lead author on the paper, explains the significance of the finding:

“The presence of puffy, hydrogen-dominated atmospheres would have indicated that these planets are more likely gaseous worlds like Neptune. The lack of hydrogen in their atmospheres further supports theories about the planets being terrestrial in nature. This discovery is an important step towards determining if the planets might harbour liquid water on their surfaces, which could enable them to support living organisms.”

The work proceeded through transmission spectroscopy, in which some of the light of the star passes through the planetary atmosphere and leaves a distinctive trace in the star’s spectrum. The beauty of the TRAPPIST-1 system is that we have so many transits to work with. Moreover, all seven of the planets orbit their star much closer than Mercury is to the Sun, so we have transits occurring frequently, and the possibility of liquid water on some planetary surfaces. We’re also dealing with a planetary system that’s a relatively nearby 40 light years away. 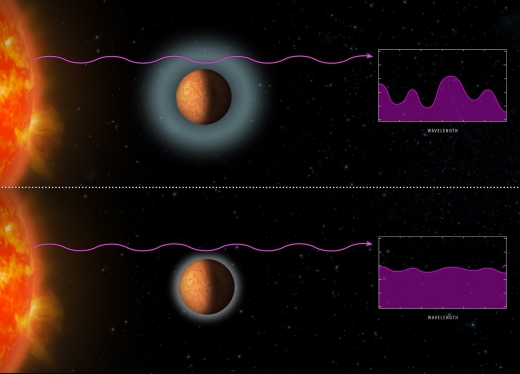 Image: The graphic at the top shows a model spectrum containing the signatures of gases that the astronomers would expect to see if the exoplanets’ atmospheres were puffy and dominated by primordial hydrogen from the distant worlds’ formation. The Hubble observations, however, revealed that the planets do not have hydrogen-dominated atmospheres. The flatter spectrum shown in the lower illustration indicates that Hubble did not spot any traces of water or methane, which are abundant in hydrogen-rich atmospheres. The researchers concluded that the atmospheres are composed of heavier elements residing at much lower altitudes than could be measured by the Hubble observations. Credit: NASA, ESA and Z. Levy (STScI).

If heavier gases like carbon dioxide, methane, water and oxygen are atmospheric constituents in this system, the James Webb Space Telescope may well be able to find them. What the Hubble work achieves is to take one possibility off the table before JWST goes to work, assuming the latter is successfully deployed in 2019.

The TRAPPIST-1 planets may have had hydrogen atmospheres when first formed, assuming they formed further away from the parent star and migrated into their present positions. The primordial hydrogen would then have been lost as the planets moved close to the star, allowing the formation of secondary atmospheres. Our own Solar System’s rocky planets evidently formed in hotter and drier regions much closer, on a relative basis, to the Sun.

Hannah Wakeford (STScI), one of the scientists involved with this work, adds:

The paper is de Wit et al., “Atmospheric reconnaissance of the habitable-zone Earth-sized planets orbiting TRAPPIST-1,” Nature Astronomy 5 February 2018 (abstract). Tomorrow we’ll look at work just published in Astronomy and Astrophysics on new constraints on the mass, density and composition of the seven planets around TRAPPIST-1.