Yesterday we saw that, by pushing the Hubble telescope to its limits, we could make a call about three of the TRAPPIST-1 planets — d, e and f — and one possibility for their respective atmospheres. The Hubble data rule out puffy atmospheres rich in hydrogen for these three (TRAPPIST-1 g needs more work before a definitive call can be made there).

This is a useful finding, for hydrogen is a greenhouse gas that can heat planets close to their star beyond our usual norms for habitability. Set out deeper in a stellar system, we can think of Neptune, a gaseous world far different from the kind of rocky, terrestrial-class planets most likely to produce surface water. So on balance, the Hubble work, while not telling us anything more about potential atmospheres in this system, does rule out the Neptune scenario. That leaves open the question of whether future instruments will find more compact atmospheres.

The James Webb Space Telescope should be able to probe these worlds, perhaps revealing heavier gases like methane, carbon dioxide, water and oxygen. Meanwhile, we have another new paper to look at, from lead author Simon Grimm and colleagues, taking another angle on the composition of the TRAPPIST-1 worlds. Grimm (University of Bern Centre for Space and Habitability) and team have produced new mass estimates that allow a more fine-grained appraisal of the planets’ density, which is a step toward characterizing each planet. 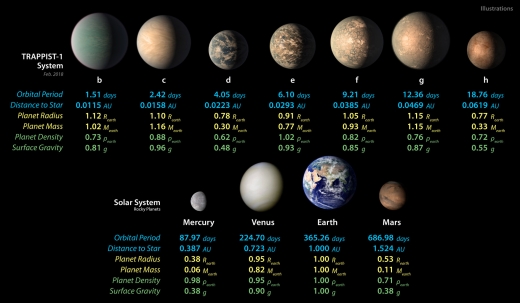 Image: This chart shows, on the top row, artist concepts of the seven planets of TRAPPIST-1 with their orbital periods, distances from their star, radii, masses, densities and surface gravity as compared to those of Earth. These numbers are current as of February 2018. On the bottom row, the same numbers are displayed for the bodies of our inner solar system: Mercury, Venus, Earth and Mars. The TRAPPIST-1 planets orbit their star extremely closely, with periods ranging from 1.5 to only about 20 days. This is much shorter than the period of Mercury, which orbits our sun in about 88 days. Credit: NASA/JPL-Caltech.

The work of Grimm and team is yet another illustration of why TRAPPIST-1 is such a remarkable target. A transit can tell us about the radius of the world between us and the star, but we also need mass information to make a call on density. Calling this system “…a fascinating setting to study the formation and evolution of tightly-packed small planet systems…” the paper explains the problem in a nutshell:

While the TRAPPIST-1 planet sizes are all known to better than 5%, their densities suffer from significant uncertainty (between 28 and 95%) because of loose constraints on planet masses. This critically impacts in turn our knowledge of the planetary interiors, formation pathway (Ormel et al. 2017; Unterborn et al. 2017) and long-term stability of the system. So far, most exoplanet masses have been measured using the radial-velocity technique. But because of the TRAPPIST-1 faintness (V=19), precise constraints on Earth-mass planets are beyond the reach of existing spectrographs.

Fortunately, in this system we are dealing with seven tightly packed planets (all within the orbit of Mercury around the Sun). In this resonant chain, more massive planets can perturb the orbits of lighter ones, creating transit timing variations (TTV) that can be modeled to produce mass values for each world. 284 transit timing variations obtained with the SPECULOOS and TRAPPIST instruments between September 17, 2015 and March 27, 2017 were complemented by previously published TRAPPIST data and Spitzer as well as Kepler (K2) observations.

The models employed are anything but simple. In fact, the researchers had to examine 35 different parameters, a problem they tackled with new computer algorithms. Simulating orbits until the calculations agree with observed values for the TRAPPIST-1 transits tightens up our previous mass estimates. The work absorbed a year, says Grimm, who goes on to explain:

“The TRAPPIST-1 planets are so close together that they interfere with each other gravitationally, so the times when they pass in front of the star shift slightly. These shifts depend on the planets’ masses, their distances and other orbital parameters. With a computer model, we simulate the planets’ orbits until the calculated transits agree with the observed values, and hence derive the planetary masses.”

What emerges corroborates what the Hubble data show. Rather than being gaseous worlds, the TRAPPIST-1 planets are primarily made of rock. Moreover, they contain significant amounts of volatiles, probably water, given that water in the form of vapor, liquid or ice is the most abundant source of volatiles for the kind of protoplanetary disk that would have produced this system. In some cases, the water can amount to 5% of the planet’s mass. By contrast, Earth has only about 0.02% water by mass. Some of the TRAPPIST-1 planets could thus have 250 times more water than the Earth’s oceans.

TRAPPIST-1 b and c, the two innermost planets, appear to have rocky cores and thick atmospheres, according to this work, while TRAPPIST-1 d, the lightest of the planets (about 30 percent Earth mass) may have a large atmosphere, an ocean or an ice layer. All three possibilities would account for the volume of volatiles thought to match a planet of this density.

TRAPPIST-1 e turns out to be somewhat denser than the Earth, suggestive of a dense iron core and, perhaps, the absence of a thick atmosphere, ocean or ice layer. In terms of insolation from the central star, as well as size and density, this is the planet most like the Earth. The question of why it seems to have a rockier composition than any of its companions remains unresolved.

As to the outer worlds, TRAPPIST-1 f, g and h are distant enough for ice to be frozen on their surfaces, and according to Grimm’s team, are unlikely to have any more than thin atmospheres. 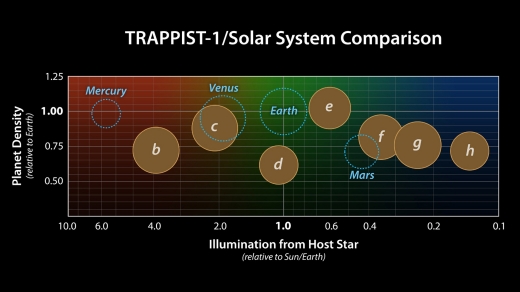 Image: This graph presents known properties of the seven TRAPPIST-1 exoplanets (labeled b through h), showing how they stack up to the inner rocky worlds in our own solar system. The horizontal axis shows the level of illumination that each planet receives from its host star. TRAPPIST-1 is a mere 9 percent the mass of our Sun, and its temperature is much cooler. But because the TRAPPIST-1 planets orbit so closely to their star, they receive comparable levels of light and heat to Earth and its neighboring planets. The vertical axis shows the densities of the planets. Density, calculated based on a planet’s mass and volume, is the first important step in understanding a planet’s composition. The plot shows that the TRAPPIST-1 planet densities range from being similar to Earth and Venus at the upper end, down to values comparable to Mars at the lower end. Credit: NASA/JPL-Caltech.

Among the most interesting things about TRAPPIST-1 is the history of its planetary system, which the paper addresses this way:

The resonant structure of the TRAPPIST-1 system (Luger et al. 2017) is a telltale sign of orbital migration (Terquem & Papaloizou 2007; Ogihara & Ida 2009). The fact that all seven planets form a single resonant chain indicates that the entire system migrated in concert (Cossou et al. 2014; Izidoro et al. 2017). Indeed, orbital solutions generated by disk-driven migration have been shown to be more stable than other solutions (Tamayo et al. 2017b). Whereas most resonant systems are likely to be unstable ((Izidoro et al. 2017; Matsumoto et al. 2012)), the TRAPPIST-1 can be interpreted as a system that underwent a relatively slow migration creating a long-lived resonant system.

We will need the James Webb Space Telescope to move to greater certainty on the question of whether atmospheres actually exist here and what they are made of. I notice that the robotic SAINT-EX Observatory is under construction in Mexico, with the goal of searching for terrestrial planets around cool stars like TRAPPIST-1 (it will also provide ground support for the European Space Agency’s CHEOPS mission). Demory and team hope to apply the computer code they used in the TRAPPIST-1 work on systems detected by SAINT-EX, which should begin operations this year.

The paper is Grimm et al., “The nature of the TRAPPIST-1 exoplanets,” in press at Astronomy & Astrophysics (preprint).

Next post: Lunar Recession: Implications for the Early Earth