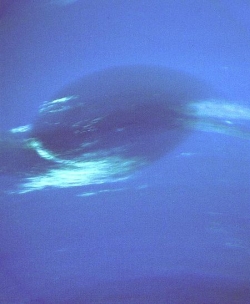 A Hubble project called Outer Planet Atmospheres Legacy (OPAL) has been producing long-term information about the four outer planets at ultraviolet wavelengths, a unique capability that has paid off in deepening our knowledge of Neptune. If you kept pace with Voyager 2 at Neptune, you’ll recall that the spacecraft found huge dark storms in the planet’s atmosphere. Neptune proved to be more atmospherically active than its distance from the Sun would have suggested, and Hubble found another two storms in the mid-1990’s that later vanished.

Image: Neptune’s Great Dark Spot, a large anticyclonic storm similar to Jupiter’s Great Red Spot, observed by NASA’s Voyager 2 spacecraft in 1989. The image was shuttered 45 hours before closest approach at a distance of 2.8 million kilometers. The smallest structures that can be seen are of an order of 50 kilometers. The image shows feathery white clouds that overlie the boundary of the dark and light blue regions. Credit: NASA/JPL.

Now we have evidence of another storm, discovered by Hubble in 2015 and evidently vanishing before our eyes. This is a storm that was once large enough to have spanned the Atlantic, evidently visible because primarily composed of hydrogen sulfide drawn up from the deeper atmosphere. UC-Berkeley’s Joshua Tollefson, a co-author on the new paper on this work, notes that the storm’s darkness is relative: “The particles themselves are still highly reflective; they are just slightly darker than the particles in the surrounding atmosphere.”

Image: This series of Hubble Space Telescope images taken over 2 years tracks the demise of a giant dark vortex on the planet Neptune. The oval-shaped spot has shrunk from 5,000 kilometers across its long axis to 3,700 kilometers across, over the Hubble observation period. Immense dark storms on Neptune were first discovered in the late 1980s by the Voyager 2 spacecraft. Since then only Hubble has tracked these elusive features. Hubble found two dark storms that appeared in the mid-1990s and then vanished. This latest storm was first seen in 2015. The first images of the dark vortex are from the Outer Planet Atmospheres Legacy (OPAL) program, a long-term Hubble project that annually captures global maps of our solar system’s four outer planets. Credit: NASA, ESA, and M.H. Wong and A.I. Hsu (UC Berkeley).

The differences between Neptune’s storms and famous Jovian features like the Great Red Spot are interesting though not yet fully understood. The Great Red Spot has been a well described feature on Jupiter for more than two centuries, still robust though varying in size and color. A storm that once encompassed four Earth diameters had shrunk to twice Earth’s diameter in the Voyager 2 flyby of 1979, and has now dropped to perhaps 1.3. As to its heat sources, they are still under investigation, as we saw in 2016 (check Jupiter’s Great Red Spot as Heat Source).

Neptune is another story, with storms that seem to last but a few years. Thus the fading of the recent dark spot, which had been observed at mid-southern latitudes. Michael H. Wong (UC-Berkeley) is lead author of the paper:

“It looks like we’re capturing the demise of this dark vortex, and it’s different from what well-known studies led us to expect. Their dynamical simulations said that anticyclones under Neptune’s wind shear would probably drift toward the equator. We thought that once the vortex got too close to the equator, it would break up and perhaps create a spectacular outburst of cloud activity.”

But the storm drifted not toward the equator but the south pole, not constrained by the powerful alternating wind jets found on Jupiter. Moreover, we have no information on how these storms form or how fast they rotate. And as the new paper notes, the five Neptune dark spots we’ve thus far found have differed broadly in terms of size, shape, oscillatory behavior and companion cloud distribution. We have much to learn about their formation, behavior and dissipation.

When you think about flyby missions like Voyager 2 at Neptune, the value of getting that first look at a hitherto unknown object is obvious. But we are moving into an era when longer-term observations become paramount. The OPAL program with Hubble is an example of this, studying in the case of Neptune a phenomenon that seems to exist on a timescale that suits an annual series of observations. Hubble has been complemented by observations from other observatories, including not just Spitzer but, interestingly, Kepler K2. A robotic adaptive optics system tuned for planetary atmospheric science is being prepared for deployment in Hawaii, offering a way to scrutinize these worlds over even smaller periods.