Between Kepler and the ensuing K2 mission, we’ve had quite a haul of exoplanets. Kepler data have been used to confirm 2341 exoplanets, with NASA declaring 30 of these as being less than twice Earth-size and in the habitable zone. K2 has landed 307 confirmed worlds of its own. K2 offers a different viewing strategy than Kepler’s fixed view of over 150,000 stars. While the transit method is still at work, K2 pursues a series of observing campaigns, its fields of view distributed around the ecliptic plane, and with photometric precision approaching the original.

Why the relationship with the ecliptic? Remember that what turned Kepler into K2 was the failure of two reaction wheels, the second failing less than a year after the first. Working in the ecliptic plane minimizes the torque produced by solar wind pressure, thus minimizing pointing drift and allowing the spacecraft to be controlled by its thrusters and remaining two reaction wheels. Each K2 campaign is limited to about 80 days because of sun angle constraints. 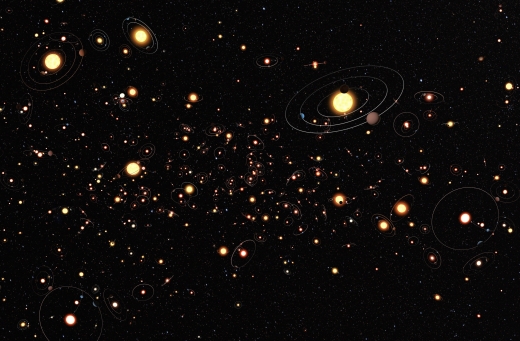 Image: After detecting the first exoplanets in the 1990s, astronomers have learned that planets around other stars are the rule rather than the exception. There are likely hundreds of billions of exoplanets in the Milky Way alone. Credit: ESA/Hubble/ESO/M. Kornmesser.

More K2 planets have now turned up in an international study led by Andrew Mayo (National Space Institute, Technical University of Denmark). The research, underway since the first release of K2 data in 2014, uncovered 275 planet candidates, of which 149 were validated. 56 of the latter had not previously been detected, while 39 had already been identified as candidates, and 53 had already been validated, with one previously classed as a false positive.

Overall, the work increases the validated K2 planet sample by almost 50 percent, while increasing the K2 candidate sample by 20 percent. What stands out here is not so much the trove of new planets but the validation techniques brought to bear, which were applied to a large sample as part of a framework developed to increase validation speed. From the paper:

This research will also be useful even after the end of the K2 mission. The upcoming TESS mission (Ricker et al. 2015) is expected to yield more than 1500 total exoplanet discoveries, but it is also estimated that TESS will detect over 1000 false positive signals (Sullivan et al. 2015). Even so, one (out of three) of the level one baseline science requirements for TESS is to measure the masses of 50 planets with Rp < 4 R⊕. Therefore, there will need to be an extensive follow-up program to the primary photometric observations conducted by the spacecraft, including careful statistical validation to aid in the selection of follow-up targets. The work presented here will be extremely useful in that follow-up program, since only modest adjustments will allow for the validation of planet candidate systems identified by TESS rather than K2.