At the last Tennessee Valley Interstellar Workshop, I was part of a session on biosignatures in exoplanet atmospheres that highlighted how careful we have to be before declaring we have found life. Given that, as Alex Tolley points out below, our own planet has been in its current state of oxygenation for a scant 12 percent of its existence, shouldn’t our methods include life detection in as wide a variety of atmospheres as possible? A Centauri Dreams regular, Alex addresses the question by looking at new work on chemical disequilibrium and its relation to biosignature detection. The author (with Brian McConnell) of A Design for a Reusable Water-Based Spacecraft Known as the Spacecoach (Springer, 2016), Alex is a lecturer in biology at the University of California. Just how close are we to an unambiguous biosignature detection, and on what kind of world will we find it? 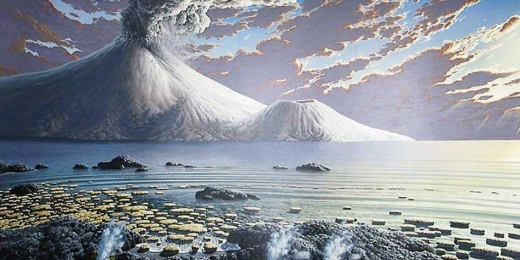 The Kepler space telescope has established that exoplanets are abundant in our galaxy and that many stars have planets in their habitable zones (defined as having temperatures that potentially allow surface water). This has reinvigorated the quest to answer the age-old question “Are We Alone?”. While SETI attempts to answer that question by detecting intelligent signals, the Drake equation suggests that the emergence of intelligence is a subset of the planets where life has emerged. When we envisage such living worlds, the image that is often evoked is of a verdant paradise, with abundant plant life clothing the land and emitting oxygen to support respiring animals, much like our pre-space age visions of Venus.

Naturally, much of the search for biosignatures has focused on oxygen (O2), whose production on Earth is now primarily produced by photosynthesis. Unfortunately, O2 can also be produced abiotically via photolysis of water, and therefore alone is not a conclusive biosignature. What is needed is a mixture of gases in disequilibrium that can only be maintained by biotic and not abiotic processes. Abiotic processes, unless continually sustained, will tend towards equilibrium. For example, on Earth, if life completely disappeared today, our nitrogen-oxygen dominated atmosphere would reach equilibrium with the oxygen bound as nitrate in the ocean. 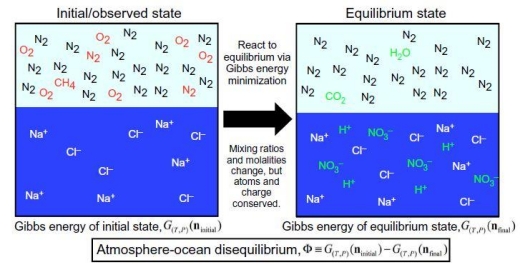 Image: Schematic of methodology for calculating atmosphere-ocean disequilibrium. We quantify the disequilibrium of the atmosphere-ocean system by calculating the difference in Gibbs energy between the initial and final states. The species in this particular example show the important reactions to produce equilibrium for the Phanerozoic atmosphere-ocean system, namely, the reaction of N2, O2, and liquid water to form nitric acid, and methane oxidation to CO2 and H2O. Red species denote gases that change when reacted to equilibrium, whereas green species are created by equilibration. Details of aqueous carbonate system speciation are not shown. Credit: Krissansen-Totton et al. (citation below).

Another issue with looking for O2 is that it assumes a terrestrial biology. Other biologies may be different. However environments with large, sustained, chemical disequilibrium are more likely to be a product of biology.

A new paper digs into the issue. The work of Joshua Krissansen-Totton (University of Washington, Seattle), Stephanie Olson (UC-Riverside) and David C. Catling (UW-Seattle), the paper tackles a question the authors have addressed in an earlier paper:

“Chemical disequilibrium as a biosignature is appealing because unlike searching for biogenic gases specific to particular metabolisms, the chemical disequilibrium approach makes no assumptions about the underlying biochemistry. Instead, it is a generalized life-detection metric that rests only on the assumption that distinct metabolisms in a biosphere will produce waste gases that, with sufficient fluxes, will alter atmospheric composition and result in disequilibrium.”

This approach also opens up the possibility of detecting many more life-bearing worlds as the Earth’s highly oxygenated atmosphere has only been in this state for about 12% of the Earth’s existence.

With the absence of high partial pressures of O2 before the Pre-Cambrian, are there biogenic chemical disequilibrium conditions that can be discerned from the state of primordial atmospheres subject to purely abiotic equilibrium?

The new Krissansen-Totton et al​ paper attempts to do that for the Archaean (4 – 2.5 gya) and Proterozoic (2.5 – 0.54) eons. Their approach is to calculate the Gibbs Free Energy (G), a metric of disequilibrium, for gases in an atmosphere-oceanic environment. The authors use a range of gas mixtures from the geologic record and determine the disequilibrium they represent using calculations of G for the observed versus the expected equilibrium concentrations of chemical species.

The authors note that almost all the G is in our ocean compartment from the nitrogen (N2)-O2 not reaching equilibrium as ionic nitrate. A small, but very important disequilibrium between methane (CH4) and O2 in the atmosphere is also considered a biosignature.

Using their approach, the authors look at the disequilibria in the atmosphere-ocean model in the earlier Archaean and Proterozoic eons. The geologic and model evidence suggests that the atmosphere was largely N2 and carbon dioxide (CO2), with a low concentration of O2 (2% or less partial pressure) in the Proterozoic.

In the Proterozoic, as today, the major disequilibrium is due to the lack of nitrate in the oceans and therefore the higher concentrations of O2 in the atmosphere. Similarly, an excess concentration of CH4 that should quickly oxidize to CO2 at equilibrium. In the Archaean, prior to the increase in O2 from photosynthesis, the N2, CO2, CH4 and liquid H2O equilibrium should consume the CH4 and increase the concentration of ammonium ions (NH4+ ) and bicarbonate (HCO3-) in the ocean. The persistence of CH4 in both eons is primarily driven by methanogen bacteria. 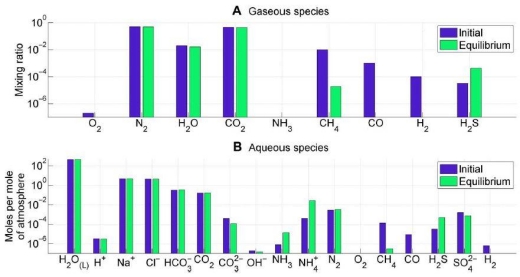 Image: Atmosphere-ocean disequilibrium in in the Archean. Blue bars denote assumed initial abundances from the literature, and green bars denote equilibrium abundances calculated using Gibbs free energy minimization. Subplots separate (A) atmospheric species and (B) ocean species. The most important contribution to Archean disequilibrium is the coexistence of atmospheric CH4, N2, CO2, and liquid water. These four species are lessened in abundance by reaction to equilibrium to form aqueous HCO3 and NH4. Oxidation of CO and H2 also contributes to the overall Gibbs energy change. Credit: Krissansen-Totton et al.

Therefore a biosignature for such an anoxic world in a stage similar to our Archaean era, would be to observe an ocean coupled with N2, CO2 and CH4 in the atmosphere. There is however an argument that might make this biosignature ambiguous.

CH4 and carbon monoxide (CO) might be present due to impacts of bolides (Kasting). Similarly, under certain conditions, it is possible that the mantle might be able to outgas CH4. In both cases, CO would be present and indicative of an abiogenic process. On Earth, CO is consumed as a substrate by bacteria, so its presence should be absent on a living world, even should such outgassing or impacts occur. The issue of CH4 outgassing, at least on earth, is countered by the known rates of outgassing compared to the concentration of CH4 in the atmosphere and ocean. The argument is primarily about rates of CH4 production between abiotic and biotic processes. Supporting Kasting, the authors conclude that on Earth, abiotic rates of production of CH4 fall far short of the observed levels. 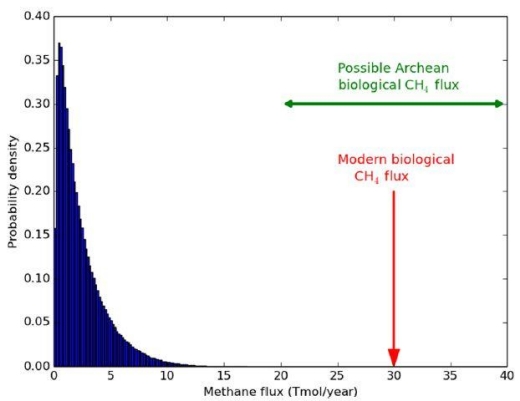 Image: Probability distribution for maximum abiotic methane production from serpentinization on Earth-like planets. This distribution was generated by sampling generous ranges for crustal production rates, FeO wt %, maximum fractional conversion of FeO to H2, and maximum fractional conversion of H2 to CH4, and then calculating the resultant methane flux 1 million times (see the main text). The modern biological flux (58) and plausible biological Archean flux (59) far exceed the maximum possible abiotic flux. These results support the hypothesis that the co-detection of abundant CH4 and CO2 on a habitable exoplanet is a plausible biosignature. Credit: Krissansen-Totton et al.

The authors conclude that their biosignature should also exclude the presence of CO to confirm the observed gases as a biosignature:

“The CH4-N2-CO2-H2O disequilibrium is thus a potentially detectable biosignature for Earth-like exoplanets with anoxic atmospheres and microbial biospheres. The simultaneous detection of abundant CH4 and CO2 (and the absence of CO) on an ostensibly habitable exoplanet would be strongly suggestive of biology.”

Given these gases in the presence of an ocean, can we use them to detect life on exoplanets?

Astronomers have been able to detect CO2, H2O, CH4 and CO in the atmosphere of HD 189733b, which is not Earthlike, but rather a hot Jupiter with a temperature of 1700F, far too hot for life. So far these gases have not been detectable on rocky worlds. Some new ground-based telescopes and the upcoming James Webb Space Telescope should have the capability of detecting these gases using transmission spectroscopy as these exoplanets transit their star.

It is important to note that the presence of an ocean is necessary to create high values of G. The Earth’s atmosphere alone has quite a low G, even compared to Mars. It is the presence of an ocean that results in G orders of magnitude larger than that from the atmosphere alone. Such an ocean is likely to be first detected by glints or the change in color of the planet as it rotates exposing different fractions of land and ocean.

An interesting observation of this approach is that a waterworld or ocean exoplanet might not show these biosignatures as the lack of weathering blocks the geologic carbon cycle and may preclude life’s emergence or long term survival. This theory might now be testable using spectroscopy and calculations for G.

This approach to biosignatures is applicable to our own solar system. As mentioned, Mars’ current G is greater than Earth’s atmosphere G. This is due to the photochemical disequilibrium of CO and O2. The detection of CH4 in Mars’ atmosphere, although at very low levels, would add to their calculation of Mars’ atmospheric G. In future, if the size of Mars’ early ocean can be inferred and gases in rocks extracted, the evidence for paleo life might be inferred. Fossil evidence of life would then confirm the approach.

Similarly, the composition of the plumes from Europa and Enceladus should also allow calculation of G for these icy moons and help to infer whether their subsurface oceans are abiotic or support life.

Within a decade, we may have convincing evidence of extraterrestrial life. If any of those worlds are not too distant, the possibility of studying that life directly in the future will be exciting.

Next post: Proxima Flare May Force Rethinking of Dust Belts