News of a major stellar flare from Proxima Centauri is interesting because flares like these are problematic for habitability. Moreover, this one may tell us something about the nature of the planetary system around this star, making us rethink previous evidence for dust belts there.

But back to the habitability question. Can red dwarf stars sustain life in a habitable zone much closer to the primary than in our own Solar System, when they are subject to such violent outbursts? What we learn in a new paper from Meredith MacGregor and Alycia Weinberger (Carnegie Institution for Science) is that the flare at its peak on March 24, 2017 was 10 times brighter than the largest flares our G-class Sun produces at similar wavelengths (1.3 mm). 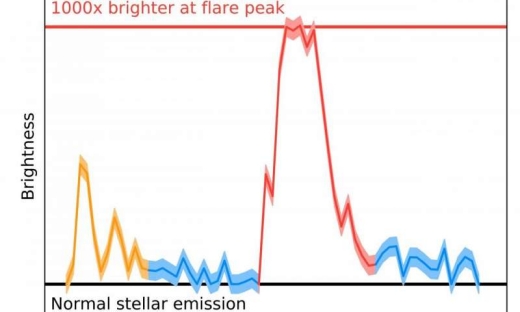 Image: The brightness of Proxima Centauri as observed by ALMA over the two minutes of the event on March 24, 2017. The massive stellar flare is shown in red, with the smaller earlier flare in orange, and the enhanced emission surrounding the flare that could mimic a disk in blue. At its peak, the flare increased Proxima Centauri’s brightness by 1,000 times. The shaded area represents uncertainty. Credit: Meredith MacGregor.

Lasting less than two minutes, the flare was preceded by a smaller flare, as shown above, revealing the interactions of accelerated electrons with Proxima Centauri’s charged plasma. We already knew that Proxima produced regular X-ray flares (recent studies have pegged the rate at one large event every few days), though these are much smaller than the flare just observed. The effects of such flaring on Proxima b could be profound, according to MacGregor:

“It’s likely that Proxima b was blasted by high energy radiation during this flare. Over the billions of years since Proxima b formed, flares like this one could have evaporated any atmosphere or ocean and sterilized the surface, suggesting that habitability may involve more than just being the right distance from the host star to have liquid water.”

The issue has significance far beyond Proxima because M-class stars are the most common in the galaxy. They’re also given to pre-main sequence periods marked by frequent changes in luminosity, and prone to a high degree of stellar activity throughout their lifetimes. Proxima Centauri, spectral class M5.5V, has long been known to be a flare star, leading to the current interest in determining the effects of its variability on the single known planet.

MacGregor and Weinberger worked with data from the ALMA 12-m array and the Atacama Compact Array (ACA). The datasets from these observations were examined by Guillem Anglada (Instituto de Astrofísica de Andalucía, Granada, Spain) in 2017, whose team found signs of a dust belt of about 1/100th of Earth’s mass in the 1-4 AU range, with the possibility of another outer belt. These two structures seemed to parallel the asteroid and Kuiper belts we find in our own Solar System, and it was thought that the inner belt might help us constrain the inclination of the Proxima Centauri system, while giving us an idea of its complexity.

For MacGregor and Weinberger looked at the ALMA data as a function of observing time, noticing the transient nature of the radiation from the star. From the paper:

The quiescent emission detected by the sensitive 12-m array observations lies below the detection threshold of the ACA observations, and the only ACA detection of Proxima Centauri is during a series of small flares followed by a stronger flare of ∼ 1 minute duration. Due to the clear transient nature of this event, we conclude that there is no need to invoke the presence of an inner dust belt at 1 − 4 AU. It is also likely that the slight excess above the expected photosphere observed in the 12-m observations is due to coronal heating from continual smaller flares, as is seen for AU Mic, another active M dwarf that hosts a well-resolved debris disk. If that is the case, then the need to include warm dust emission at ∼ 0.4 AU is removed. Although the detection of a flare does not immediately impact the claim of an outer belt at ∼ 30 AU, the significant number of background sources expected in the image and known high level of background cirrus suggest that caution should be used in over-interpreting this marginal result.

So we still have the possibility of an outer belt, though not one that can be claimed with any degree of certainty, and we have removed the need for the inner belt. Proxima Centauri may indeed have other planets and a more complex system than we currently know, but the data from ALMA and ACA now appear to be indicative only of the known flaring phenomenon.

“There is now no reason to think that there is a substantial amount of dust around Proxima Cen,” says Weinberger. “Nor is there any information yet that indicates the star has a rich planetary system like ours.”