A Plausible Path for Life on Enceladus

Cassini has shown us that the plumes of Enceladus are laden not just with ammonia and carbon dioxide but also traces of methane. Scientists at the University of Vienna (Austria) are not claiming this finding as evidence for life, but they have produced laboratory work showing that at least one kind of microbe could survive in conditions like those within the moon. Couple this with the presence of molecular hydrogen (H2), also found within the plumes, and the existence of microorganisms deep within Enceladus appears at least plausible. Some of the methane found in the Enceladus plumes may turn out to be produced by methanogens.

The microorganism in question is Methanothermococcus okinawensis, which can be found around sea vents in the Okinawa Trough off Japan. In conditions like these, methanogenic archaea can sustain themselves by the chemical nutrients found around hydrothermal vents, a scenario that could likewise exist beneath the Enceladus ice.

Simon Rittmann, working with colleagues in Austria and Germany, put the microbe into Enceladus-like conditions in a series of laboratory tests, varying the amount of molecular hydrogen. Demonstrating the survival of the archaea involved introducing different values for pressure and pH, assuming abundant carbon dioxide and molecular hydrogen’s store of energy. M. okinawensis demonstrated that it could survive, producing methane as a by-product. 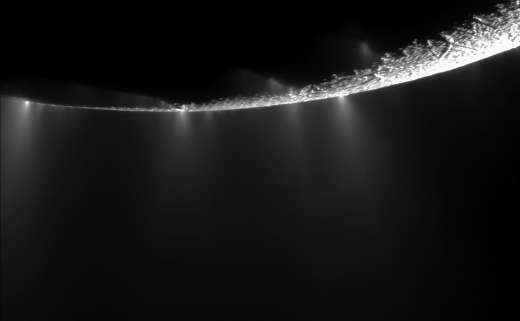 Image: Plumes erupting off the surface of Enceladus, an icy moon. Credit: NASA/JPL/SSI.

At the floor of the Enceladus ocean, temperatures above 0 degrees Celsius are likely to exist in a region abundant in rock and minerals. Enough molecular hydrogen could be produced by reactions involving the mineral olivine to sustain these lifeforms. The process is called serpentinization, involving interactions between seawater and rocks in the moon’s mantle that can also produce methane (CH4) and hydrogen sulfide (H2S). The experimental work shows that serpentinization reactions can support a rate of molecular hydrogen production high enough to sustain this kind of organism. As the paper notes:

Thus the microorganism survives under the conditions Rittmann and team introduced into the laboratory, producing methane as it grows, a possible source of the methane found in Cassini observations. At this point in the investigation, we can’t rule out abiotic methane either.

Temperature is an interesting variable, as the paper goes on to show:

The mean temperature in the subsurface ocean of Enceladus might be just above 0 °C except for the areas where hydrothermal activity is assumed to occur. In these hydrothermal settings temperatures higher than 90 °C are supposedly possible, and are therefore the most likely sites for higher biological activity on Enceladus. Although methanogens are found over a wide temperature range on Earth, including temperatures around 0 °C, growth of these organisms at low temperatures is observed to be slow.

With enough molecular hydrogen produced through serpentinization to support methane production, the case for searching for methanogenic biosignatures is clear, an investigation explored briefly in the paper. We may be able to detect lipids and hydrocarbons as well as carbon isotope ratios that flag the presence of living organisms. This laboratory work makes the case for the kind of mission that will be needed to study possible Enceladus-based life in situ to learn whether methanogenic organisms are more than an extrapolation.

“We tried to be as broad as possible with our assumptions,” Rittmann said. There are no direct measurements for what exists beneath Enceladus’s ice crust. “No one will be able to tell if these conditions are really occurring on Enceladus,” he said. “However, we did our best to be as careful as possible.”