When researchers talk about ‘hot Saturns,’ it’s natural to imagine a ringed planet in a close orbit to its star, rings being Saturn’s most prominent feature. But WASP-39b hardly fits this picture. Some 700 light years from Earth in the constellation Virgo, this is a tidally locked world that is 20 times closer to its star than the Earth is to the Sun. WASP-39 itself is a G-class star of about 90 percent of the Sun’s mass. We have no evidence of planetary rings here, but we do see a planet whose temperature reaches 776 degrees Celsius, with a nightside not much cooler.

What keeps this world from being called a ‘hot Jupiter’ is its low density coupled with a large radius, some 1.27 times that of Jupiter (its density is about 0.28 times that of Jupiter). ‘Puffy’ planets like this show density levels far more like Saturn, and they orbit close to their stars, accounting for their extended atmospheres. WASP-39b’s atmosphere appears free of high-altitude clouds, allowing detailed study of its composition. Now we have word that the planet shows the signature of water vapor, three times as much as found on Saturn. 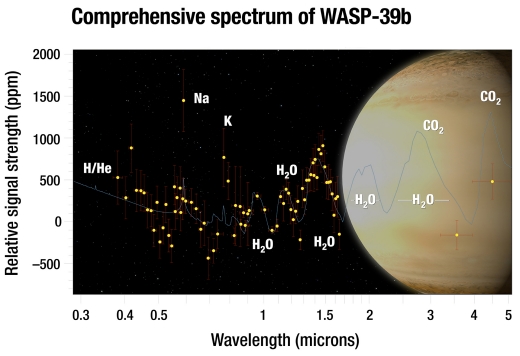 Image: Using Hubble and Spitzer, astronomers analyzed the atmosphere of the “hot Saturn” exoplanet WASP-39b, and they captured the most complete spectrum of an exoplanet’s atmosphere possible with present-day technology. By dissecting starlight filtering through the planet’s atmosphere into its component colors, the team found clear evidence for water vapor. Although the researchers predicted they would see water, they were surprised by how much water they found – three times as much water as Saturn has. Credit: NASA, ESA, G. Bacon and A. Feild (STScI), and H. Wakeford (STScI/Univ. of Exeter).

Transmission spectroscopy is the method here, analyzing light from the host star as it filters through the planet’s atmosphere during a transit. Hannah Wakeford (STscI and University of Exeter) is lead investigator on the WASP-39b work. Retrieved with the Hubble Space Telescope and the Spitzer instrument, her team’s data provide about as complete a spectrum of an exoplanetary atmosphere as current technology will allow. Says Wakeford: “This spectrum is thus far the most beautiful example we have of what a clear exoplanet atmosphere looks like.”

The formation history of worlds like these is suggested by the unexpectedly high values for water vapor. The implication is that the planet must have formed far from the star, beyond the snowline in a region where icy materials are abundant. That would mean a planetary migration into the inner system, perhaps creating havoc among smaller planets in inner orbits.

“WASP-39b shows exoplanets can have much different compositions than those of our solar system,” said co-author David Sing of the University of Exeter. “Hopefully, this diversity we see in exoplanets will give us clues in figuring out all the different ways a planet can form and evolve.”

The next move in the WASP-39b story will be to subject it to the James Webb Space Telescope, assuming a successful launch in 2019 (or perhaps later, given the recent report from the Government Accountability Office — see Marina Koren’s excellent analysis in The Atlantic for more on the problem). Once JWST is available, a more complete spectrum including atmospheric carbon will become possible, fleshing out our understanding of this unusual planet’s formation.

Previous post: A Plausible Path for Life on Enceladus