How do we go from seeing an exoplanet as a dip on a light curve or even a single pixel on an image to a richly textured world, with oceans, continents and, perhaps, life? We’ve got a long way to go in this effort, but we’re already having success at studying exoplanet atmospheres, with the real prospect of delving into planets as small as the Earth around nearby red dwarfs in the near future. Atmospheric detection and analysis can help us in the search for biosignatures.

But I was surprised when reading a recent paper to realize just how many proposals are out there to analyze planetary surfaces pending the development of next-generation technologies. Back in 2010, for example, I wrote about Tyler Robinson (University of Washington), who was working on how we might detect the glint of exo-oceans (see Light Off Distant Oceans for more on Robinson’s work). And Robinson’s ideas are joined by numerous other approaches. I won’t go into detail on any of these, but l do want to illustrate the range of possibilities here:

I’ve pulled this list with references out of a paper suggesting yet another target, the surface topography of exoplanets. The work of graduate student Moiya McTier and David Kipping (Columbia University), the paper points out that while many of these effects are beyond the reach of current equipment, they are nonetheless valuable in pushing the limits of exoplanet characterization and helping us understand what technologies we will need going forward.

So is it really possible to detect surface features like mountains, trenches and craters on a distant exoplanet? McTier and Kipping make the case that we can draw conclusions about a planetary surface through what they call its ‘bumpiness,’ which should show up in a planetary transit as a scattering in the light curve produced as its silhouette gradually changes (assuming, of course, that we are dealing with a rotating planet in transit). We would obtain not the image of a specific mountain or other surface feature but a general analysis of overall topography.

The paper’s method is to model planetary transits for known bodies — the Earth, the Moon, Mars, Venus, Mercury — to see what it would take to tease out such a signature. We have ample elevation data for rocky planets in our Solar System. Using this information, we can model what would happen if one of them transited a nearby white dwarf. The researchers used thse values to find a general relationship between bumpiness and transit depth scatter.

What we are after here is what the paper calls “an assessment of global average features,” one that incorporates the largest feature on a planet (an enormous mountain, for example) but also includes the contribution to the lightcurve scatter produced by all the planet’s features.

Mars, because of its small size and low surface gravity, turns out to be the bumpiest of these planets. A Mars-sized planet orbiting a white dwarf in its habitable zone proves to be an optimal situation for detecting bumpiness. Why white dwarfs? We learn that even huge ground-based telescopes planned for future decades such as the Extremely Large Telescope and Colossus would be unable to detect bumpiness on planets around stars like the Sun or M-dwarfs because of astrophysical noise and the limitations of the instruments. False positives through pulsations on the star’s surface, for example, can likewise appear as extra scatter in the light curve.

White dwarfs, on the other hand, appear unlikely to have convective star spots, but even if they do occur, McTier and Kipping argue that they can be detected and filtered out. Orbiting moons could similarly cause variations in the transit depth that could be mistaken for topography, but here the signature of the exomoons shows up just outside the ingress and egress points in the transit curve, unlike the topographical signature, which appears only in the in-transit data.

It turns out that the largest of our next generation of big telescopes would be able to work with a white dwarf planet, which the paper models as orbiting at 0.01 AU in the center of the star’s habitable zone. If we assume a mass typical of such stars (0.6 M☉), we get an orbital period of just over 11 hours. 20 hours of observing time covering some 400 transits with a telescope like the 74-meter combined aperture of Colossus should be able to detect topography. 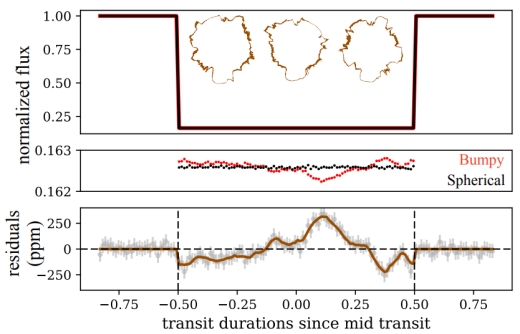 Image: This is Figure 8 from the paper, showing an oceanless Earth transiting a white dwarf. The caption: Top: Transits of a dry Earth with features (in red) and an idealized spherical Earth (in black) in front of a .01R☉ white dwarf with noise of 20 ppm added (20σ detection). The exaggerated silhouettes of Earth at different rotational phases are shown in brown. Middle: Zoomed-in frame of the bottom of the light curve in the top panel. Bottom: Residual plot showing the difference between the realistic and idealized transits. Grey shadows show the error bars on the residuals equal to 50 ppm. Dashed lines are to illustrate that residuals deviate from 0ppm only inside the transit. Credit: McTier & Kipping.

Surface features should tell us a good deal about a planet’s composition. From the paper:

…a detection of bumpiness could lead to constraints on a planet’s internal processes. Mountain ranges like the Himalayas on Earth form from the movement and collision of tectonic plates (Allen 2008). Large volcanoes like Olympic Mons on Mars form from the uninterrupted buildup of lava from internal heating sources. A high-bumpiness planet is likely to have such internal processes, with the highest bumpiness values resulting from a combination of low surface gravity, volcanism, and a lack of tectonic plate movement. Truly low-bumpiness planets are less likely to have these internal processes. On such planets, surface features are likely caused by external factors like asteroid bombardment.

I like the phrase the authors use in closing the paper, referring to their mission “of adding texture to worlds outside our own.” Texture indeed, for we are beginning to move into the realm of deeper planetary analysis, like a painter gradually applying detail to the roughest of sketches. Because of the magnitude of the challenge, we are coming at the question of exoplanet characterization from numerous different directions, as the list at the beginning of this post suggests. Synergies between their methods will be key to exoplanet surface discoveries.

The paper is McTier and Kipping, “Finding Mountains with Molehills: The Detectability of Exotopography,” accepted at Monthly Notices of the Royal Astronomical Society (preprint).