A Changing Landscape at Ceres

Ceres turns out to be a livelier place than we might have imagined. Continuing analysis of data from the Dawn spacecraft is showing us an object where surface changes evidently caused by temperature variations induced by the dwarf planet’s orbit are readily visible even in short time frames. Two new papers on the Dawn data are now out in Science Advances, suggesting variations in the amount of surface ice as well as newly exposed crustal material.

Andrea Raponi (Institute of Astrophysics and Planetary Science, Rome) led a team that discovered changes at Juling Crater, demonstrating an increase in ice on the northern wall of the 20-kilometer wide crater between April and October of 2016. Calling this ‘the first detection of change on the surface of Ceres,’ Raponi went on to say:

“The combination of Ceres moving closer to the sun in its orbit, along with seasonal change, triggers the release of water vapor from the subsurface, which then condenses on the cold crater wall. This causes an increase in the amount of exposed ice. The warming might also cause landslides on the crater walls that expose fresh ice patches.” 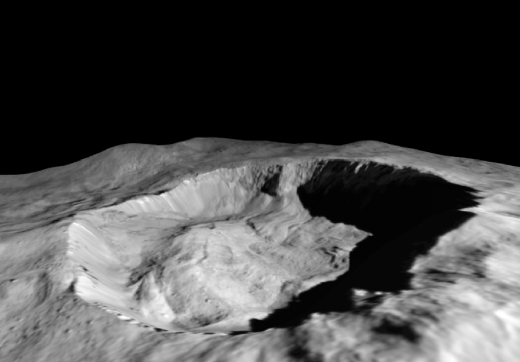 Image: This view from NASA’s Dawn mission shows where ice has been detected in the northern wall of Ceres’ Juling Crater, which is in almost permanent shadow. Dawn acquired the picture with its framing camera on Aug. 30, 2016, and it was processed with the help of NASA Ames Stereo Pipeline (ASP), to estimate the slope of the cliff. Credit: NASA/JPL-Caltech/UCLA/MPS/DLR/IDA/ASI/INAF.

Ceres was moving closer to perihelion in the period following these observations, so we would expect the temperature of areas in shadow to be increasing. Sublimating water ice that had previously accumulated on the cold walls of the crater would be a natural result, and while acknowledging other options — such as falls exposing water ice — the researchers favor a cyclical trend similar to cycles of water ice seen, for example, at Comet 67P/Churyumov–Gerasimenko. From the paper:

The linear relationship between ice abundance and solar flux… supports the possibility of solar flux as the main factor responsible for the observed increase. The water ice abundance on the wall is probably not constantly increasing over a longer time range. More likely, we are observing only part of a seasonal cycle of water sublimation and condensation, in which the observed increase should be followed by a decrease. 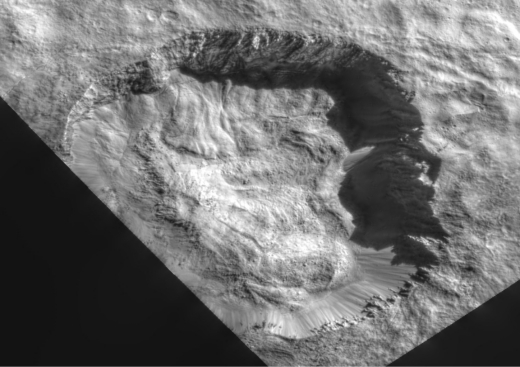 Image: This view from NASA’s Dawn mission shows the floor of Ceres’ Juling Crater. The crater floor shows evidence of the flow of ice and rock, similar to rock glaciers in Earth’s polar regions. Dawn acquired the picture with its framing camera on Aug. 30, 2016. Credit: NASA/JPL-Caltech/UCLA/MPS/DLR/IDA/ASI/INAF.

A short-term variation in surface water ice shows us an active body, a result that meshes with further observations from Dawn’s visible and infrared mapping spectrometer (VIR) showing variability in Ceres’ crust and the likelihood of newly exposed material. The work, led by Giacomo Carrozzo of the Institute of Astrophysics and Planetary Science, identifies twelve sites rich in sodium carbonates and takes a tight look at several areas where water is present as part of the carbonate structure.

Although carbonates had previously been found on Ceres, this is the first identification of hydrated carbonate there. The fact that water ice is not stable over long time periods on the surface of Ceres unless hidden in shadow, and that hydrated carbonate would dehydrate over timescales of a few million years, means that these sites have been exposed, says Carrozzo, to recent activity on the surface. 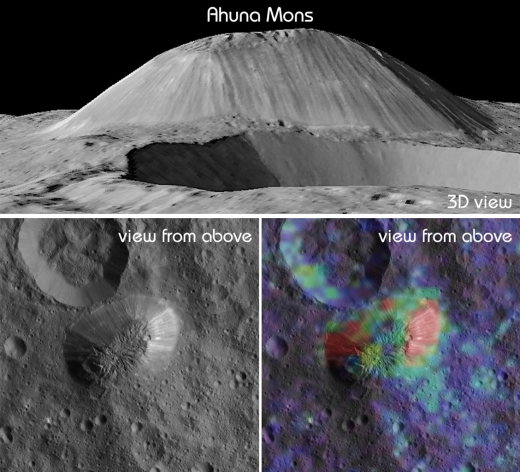 Image: This view from NASA’s Dawn mission shows Ceres’ tallest mountain, Ahuna Mons, 4 kilometers high and 17 kilometers wide. This is one of the few sites on Ceres at which a significant amount of sodium carbonate has been found, shown in green and red colors in the lower right image. The top and lower left images were collected by Dawn’s framing camera. The top image is a 3D view reconstructed with the help of topography data. Credit: NASA/JPL-Caltech/UCLA/MPS/DLR/IDA/ASI/INA.

Taken together, the water ice findings and the presence of hydrated sodium carbonates speak to the geological and chemical activity that continues on Ceres. As the paper notes:

The different chemical forms of the sodium carbonate, their fresh appearance, morphological settings, and the uneven distribution on Ceres indicate that the formation, exposure, dehydration, and destruction processes of carbonates are recurrent and continuous in recent geological time, implying a still-evolving body and modern processes involving fluid water.