Mission to an Interstellar Asteroid

On the matter of interstellar visitors, bear in mind that our friend ‘Oumuamua, the subject of yesterday’s post, was discovered at the University of Hawaii’s Institute for Astronomy, using the Pan-STARRS telescope. The Panoramic Survey Telescope and Rapid Response System is located at Haleakala Observatory on Maui, where it has proven adept at finding new asteroids, comets and variable stars. Consider ‘Oumuamua a bonus, and according to a new paper from Greg Laughlin and Darryl Seligman (Yale University), a type of object we’ll be seeing again.

Pan-STARRS may find objects like this every few years, but we’ll get a bigger payoff in terms of interstellar wanderers with the Large Synoptic Survey Telescope (LSST), now under construction at Cerro Pachón (Chile). Laughlin and Seligman think that this instrument will up the discovery rate as high as several per year, allowing us to see ‘Oumuamua in context, and also, perhaps, setting up the possibility of an intercept mission with a kinetic impactor.

More on that in a moment. But first, it’s interesting to see theories about its place of origin springing up in the brief interval since ‘Oumuamua’s passage. One of the stars of the Carina/Columba association (165-275 light years from Earth) is suggested, as is the double star system HD 200325. One recent survey of more than 200,000 nearby stars could find no conclusive evidence, but does suggest that 820,000 years ago, ‘Oumuamua encountered Gliese 876. There is even a possibility, which Laughlin and Seligman dismiss, that the object originally was ejected from our own Solar System and has now had a new encounter with it.

But back to a potential mission to ‘Oumuamua. What the authors have in mind is a kinetic impactor, which has the great advantage of producing a debris plume that we could look at with a spectroscope. We have a history of comet exploration dating back to Comet Giacobini Zinner in 1985 (International Sun-Earth Explorer), the flurry of missions — Giotto, Vega 1, Vega 2, Sakigake, Suisei — that investigated Comet Halley in 1986, the Deep Space 1 mission at Comet Borrelly (2001), and Stardust at Comet Wild 2. And the, of course, there is Deep Impact, a kinetic impactor that struck Comet Tempel I, and the European Space Agency’s highly successful Rosetta at Comet 67/Churyumov-Gerasimenko.

Even now we have the Osiris-REx mission enroute to the asteroid Bennu on a sample return mission. Thus a mission to an object from outside the Solar System seems feasible, though the challenges are obvious. As the paper notes:

Such a mission would face a number of challenges, including (1) the large heliocentric velocities of objects on hyperbolic trajectories, and (2) the lack of substantial time following the discovery of the target object for mission planning and execution, and (3) uncertainty in targeting during final approach. It is worth noting that when ‘Oumuamua was detected and announced in late October 2017, it had already passed its periastron location (which occurred on 9 September, 2017), and indeed, was already more than 1 AU from the Sun.

You may recall Andreas Hein and a team from the Initiative for Interstellar Studies, who have explored potential rendezvous missions to ’Oumuamua (see Project Lyra: Sending a Spacecraft to 1I/’Oumuamua). Laughlin and Seligman consider their mission as complementary to Hein and team, assessing how to investigate an interstellar object using chemical propulsion. Like Deep Impact, the actual impactor would be accompanied by a companion flyby probe that would examine the results spectroscopically. The feasibility of such a mission depends on having sufficient lead-time to launch the interceptor to the incoming object on a hyperbolic orbit.

Lead time is considered here in terms of the expected arrival directions and speeds of such objects. The authors do this by assuming a kinematic distribution similar to Population I stars, bearing in mind that the number of interstellar asteroids may be as much as 1016 higher than the number of stars. The paper samples the distribution of such asteroids in a cube of 10 AU around the Sun, pinpointing where they would be detectable and for how long. Such knowledge would allow us to determine optimal interception trajectories. 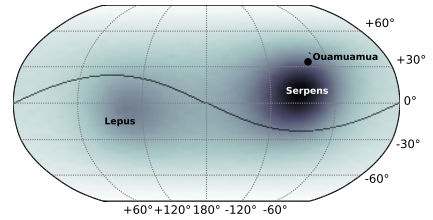 Image: This is Figure 3 from the paper. Caption: A sky map showing the probability that a future interstellar asteroid will approach the Solar System on a trajectory parallel to that direction. The darker colors indicate a higher probability. The axes denote degrees from a heliocentric point of view and the ecliptic is plotted in black. The sky positions of the constellations Serpens and Lepus, which are close in proximity to the Solar apex and anti-apex respectively, are plotted for context. The black circle indicates the sky location that ‘Oumuamua entered our Solar System, consistent with the prediction that the majority of these objects will approach with velocities parallel to the galactic apex. Credit: Laughlin & Seligman.

I send you to the paper for the specifics, but do note this with regard to ‘Oumuamua. When it was discovered, the object was three weeks beyond periastron passage, making reaching it problematic. Putting their trajectory analysis methods to work on ‘Oumuamua, the authors find that with an earlier detection, interception of ‘Oumuamua would not have been out of the question. Future interstellar asteroids could be reached given early detection and favorable trajectories — in fact, the authors conclude that wait times for mission opportunities should be in the range of 10 years, once we have the LSST (scheduled for first light in 2021) available.

And these interesting specifics on a potential mission:

The SpaceX Falcon Heavy quotes a payload capability to Mars of 16,800 kg, which we conservatively use for the payload constraint to L1. The Deep Impact mission to Tempel I had an impactor weighing ∼ 400 kg and a scientific package weighing ∼ 600 kg (A’Hearn et al. 2005). Due to the uncertainty of the position of the ISO [interstellar object], it seems appropriate to use ∼ 16 impactors, with a total weight of 400 kg. The mission program is greatly assisted by the expected 40 km/s velocity of impact with the hyperbolic ISO. Assuming that the remainder of the payload consists of fuel and oxidants, to account for the oxidants and efficiency of the rocket, we allow ∼ 1200 kg of fuel (with specific energy similar to compressed hydrogen) to produce the ∆V. Equating the kinetic energy to the energy produced by the fuel, we calculate that a maximum ∆V ∼ 15 km/s should be attainable, to impart the same amount of kinetic energy (per impact) as the Deep Impact Tempel I interception did. 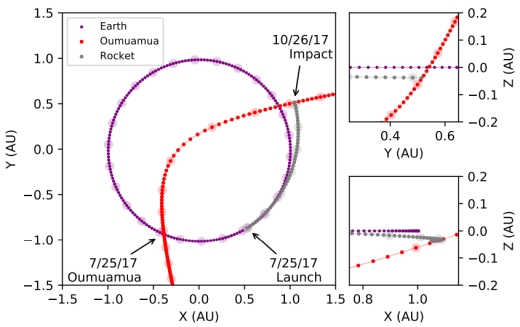 Image: This is Figure 7 from the paper. Caption: Trajectory of the minimum-∆V mission interception mission sent on July 25th 2017, which had a flight time of 83.38 days. The trajectories for ‘Oumuamua, the Earth, and the rocket are plotted in red, blue and grey respectively in four day intervals in the smaller circles, while the larger circles are plotted in 28 day intervals. The arrows indicate the positions in space of ‘Oumuamua and the rocket on the launch and interception date, 7/25/2017 and 10/16/2016. Projections in the X-Y, Y-Z and X-Z planes are shown in the left, right upper, and right lower panel respectively. Credit: Laughlin & Seligman.

16 impactors to an interstellar asteroid on a manageable trajectory, with the promise of spectroscopic analysis to equal those we have achieved with previous cometary missions. With a discovery rate ramping up to several per year once LSST is available, we should have targets to work with in the 2020s, helping us learn whether what we know of ‘Oumuamua is indicative of the population of these objects. The close-up study of remnants of planetary formation around other stars is now becoming possible provided we know where to look and when to launch.

The Laughlin & Seligman paper is “The Feasibility and Benefits of In Situ Exploration of ‘Oumuamua-like Objects,” accepted at the Astronomical Journal and available as a preprint.