Given Centauri Dreams‘s interest in exoplanet studies, it’s no surprise that when I write about the James Webb Space Telescope, it’s usually to fit the observatory into the overall study of other stellar systems. But of course JWST has been conceived to study everything from the earliest stars and galaxies to the ongoing birth of stars out of massive clouds of dust, not to mention objects within our own Solar System. JWST also offers us a real chance to probe exoplanet atmospheres around nearby M-dwarfs, but it is certainly not a dedicated exoplanet mission.

So while we hope for a successful launch in 2020, according to the evolving schedule, and look forward to finding plenty of JWST targets with the upcoming Transiting Exoplanet Survey Satellite (TESS), let’s have a look at a new mission from the European Space Agency with a tight exoplanet focus. The Atmospheric Remote-sensing Infrared Exoplanet Large-survey (ARIEL) has just been selected as an ESA science mission scheduled for launch in 2028. Its reason for existence is to look at how planetary systems form and evolve.

Giovanna Tinetti (University College London) is principal investigator here, which bodes well — I am a great admirer of Dr. Tinetti’s work and see ARIEL as being in excellent hands. Of the mission, Tinetti says this: 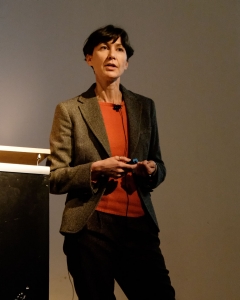 “Although we’ve now discovered around 3800 planets orbiting other stars, the nature of these exoplanets remains largely mysterious. ARIEL will study a statistically large sample of exoplanets to give us a truly representative picture of what these planets are like. This will enable us to answer questions about how the chemistry of a planet links to the environment in which it forms, and how its birth and evolution are affected by its parent star.”

ARIEL’s targets are to be exoplanets from Jupiter-mass down to super-Earths, with the primary focus on planets in warm and hot orbits close to their parent star. The thinking here is that high temperatures keep different molecular species in circulation throughout the atmosphere, making them more easily detected because they do not as readily sink or form cloud layers that can obscure them. In that sense, a planet at 2000 degrees Celsius becomes a useful laboratory, churning with interesting molecules from the atmosphere and even from the planet’s interior.

Current plans call for a launch from Kourou in French Guiana into an orbit around the L2 Lagrange Point 1.5 million kilometers from Earth, where the Webb instrument is also headed. Here the balance of gravitational forces keeps the spacecraft in a fixed position relative to the Earth and Sun with a minimal expenditure of energy. Both spacecraft will essentially be ‘parked’ at the same region in space, unlike the Spitzer instrument, which is in orbit around the Sun and will eventually lose communications when its orbital path takes it behind Sol.

While JWST will view the universe in infrared, ARIEL’s meter-class primary mirror will also collect visible light, using a spectrometer to study planetary atmospheres through transmission spectroscopy, possible when a planet passes in front of or behind its star. One of its sensors will be capable of detecting the presence of clouds. Tinetti and team hope to observe 1,000 exoplanets, following up on the worlds discovered by upcoming missions like TESS, and paving the way for future European missions like CHEOPS and PLATO. A successful JWST launch will likewise result in new target options for ARIEL. The 1,300 kg spacecraft has a cost cap of 450 million euros, roughly $550 million at current rates. 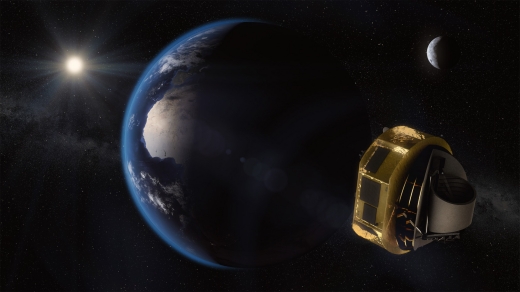 Image: Artist’s impression of ARIEL on its way to Lagrange Point 2 (L2). Here, the spacecraft is shielded from the Sun and has a clear view of the whole sky. Credit: ESA/STFC RAL Space/UCL/Europlanet-Science Office.

You may have heard about an exoplanet mission called EChO (Exoplanet Characterization Observatory), which was a candidate for ESA’s Cosmic Vision program. ESA did not fund the mission, which led Tinetti and colleagues to design the similar ARIEL observatory around a spacecraft with a lighter, less complex payload. The PLATO mission that supplanted EChO as one of ESA’s medium-class missions is an exoplanet observatory slated for a 2026 launch.