What would be our next step in the exploration of the outer system once New Horizons has visited one or more Kuiper Belt objects (KBOs)? One intriguing target with a nearby ice giant to recommend it is Triton, Neptune’s unusual moon, which was imaged up close only once, by Voyager 2 in 1989. The views were spectacular but at the time of the encounter, most of Triton’s northern hemisphere remained unseen because it was in darkness. Only one hemisphere showed up clearly as the spacecraft passed the moon at a distance of 40,000 kilometers.

Our next visit should tell us much more, but we’re still working out the concept. Thus Steven Oleson’s Phase II grant from NASA’s Innovative Advanced Concepts (NIAC) office. Oleson (NASA GRC) calls the idea Triton Hopper. In his Phase I study, he identified the various risks of the mission, analyzing its performance and its ability to collect propellant. For Triton Hopper — moving from point to point — would rely on a radioisotope engine that would collect nitrogen ice and use it for propellant, mining the moon’s surface to keep the mission viable. 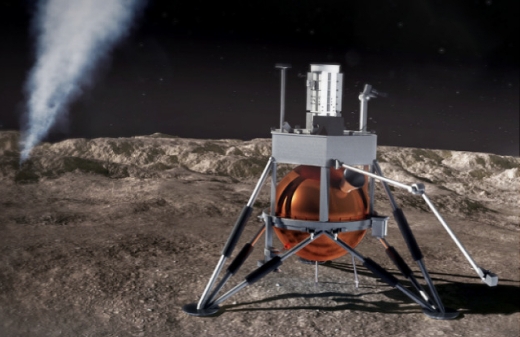 Triton is interesting on a number of levels, one of which has received recent examination As with other outer system moons, we’re learning that there may be a liquid ocean beneath the crust. Let me quote a short presentation from Terry Hurford (NASA GSFC) on this:

There is compelling evidence that Triton should be considered an ocean world. Fractures observed on Triton’s surface are consistent in location and orientation with tidal stresses produced by the decay of Triton’s orbit as it migrates toward Neptune. Tidal stresses can only reach levels to fracture the surface if a subsurface ocean exists; a solid interior will result in smaller tidal stress and likely no tectonic activity. Tidal stresses therefore provide a mechanism for fracturing and volcanism analogous to activity observed on Enceladus and, possibly, Europa. Given that Triton’s interior has dissipated a tremendous amount of energy as heat, which likely drove differentiation, and that this heat may remain until the present day, an energy source likely exists to drive geologically recent activity. Moreover, it is possible that tidal volcanism has facilitated, if not dictated, the expression of this activity on Triton’s surface.

Triton’s surface seems to be in geological motion, given how few craters show up in the Voyager views. We can also factor in that this is the only large moon in the Solar System with a retrograde orbit, leading to the view that it is a captured dwarf planet from the Kuiper Belt. That nitrogen that Steven Oleson wants to use should be abundant at the surface, with a mostly water-ice crust to be found below. Also of considerable interest: Triton’s surface deposits of tholins, organic compounds that may be precursor chemicals to the origin of life. 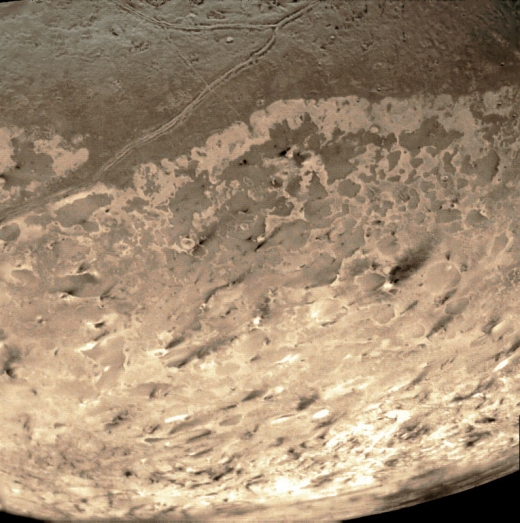 Image: Triton’s south polar terrain photographed by the Voyager 2 spacecraft. About 50 dark plumes mark what may be ice volcanoes. This version has been rotated 90 degrees counterclockwise and artificially colorized based on another Voyager 2 image. Credit: NASA/JPL.

Geologically active places like Triton are intriguing — think of Io and Europa, Enceladus and Titan — and we can add Triton’s nitrogen gas geysers into the mix, along with its tenuous nitrogen atmosphere. No question a lander here would offer abundant science return. Oleson proposes heating that surface nitrogen ice under pressure and using it as a propellant that would allow a continuing series of ‘hops’ as high as 1 kilometer and 5 kilometers downrange. Thus we would get images and videos while aloft, and surface analysis while on the ground.

Intriguing. The thin atmosphere and even the geysers could be sampled by a Triton Hopper in the same way we have looked at the Enceladus plumes, by passing directly through them.

Working with GRC colleague Geoffrey Landis, Oleson presented Triton Hopper last year at the Planetary Science Vision 2050 Workshop in Washington DC. The thinking is to land near the south pole in 2040, in the area where geysers have already been detected. The surface can then be explored in as many as 60 hops, covering some 300 kilometers. Using in situ ices as propellants offers a uniquely renewable potential for mobility.

Oleson’s Phase II work will cover, in addition to mission options to reach Triton and descend to the surface in about 15 years, details of safe landing and takeoff of the hopper. Propellant gathering is obviously a major issue, one that will be explored through a bevameter experiment on frozen nitrogen (a bevameter can measure the properties of a surface in terms of interaction with wheeled or tracked vehicles). Also in play: How to collect and heat the nitrogen propellant and find ways to increase hop distance, solutions that could play into other icy moon missions.

Be aware, too, of a Phase II grant to Michael VanWoerkom (ExoTerra Resource), who will be studying in situ resource utilization (ISRU) and miniaturization. VanWoerkom’s NIMPH project (Nano Icy Moons Propellant Harvester) will deepen his investigation into mission refueling at destination, producing return propellant on site. The work thus complements Triton Hopper and deepens our catalog of strategies for sample return from a variety of surfaces.

The NASA precis for Oleson’s Phase II study is here. The NIMPH precis is here. The Hurford presentation is available as Hurford et al., “Triton’s Fractures as Evidence for a Subsurface Ocean,” Lunar and Planetary Science XLVIII (2017) (full text), but see as well Should we reconsider our view on Neptune’s largest moon?, which ran at Astronomy.com.