A Deeper Look at TESS

The launch of TESS aboard a SpaceX Falcon 9 looks to be on track for Wednesday after yesterday’s delay, which the company attributed to the need for “additional GNC [guidance, navigation and control] analysis.” So we wait just a bit more, knowing that the payoff justifies the caution. We should be identifying planets in the thousands, and around bright, nearby stars.

Standing down today to conduct additional GNC analysis, and teams are now working towards a targeted launch of @NASA_TESS on Wednesday, April 18.

Principal investigator George Ricker and team have been through the process of designing, building and launching a mission before. It was in 2000 that NASA launched the MIT-built High Energy Transient Explorer 2, or HETE-2, that studied gamma-ray bursts for seven years in Earth orbit. A key technology for HETE-2 was the CCD — charge-coupled device — which allowed the satellite’s optical and X-ray cameras to record bursts in electronic format.

“With the advent of CCDs in the 1970s, you had this fantastic device … which made a lot of things easier for astronomers,” says HETE-2 team member Joel Villasenor, who is now also instrument scientist for TESS. “You just sum up all the pixels on a CCD, which gives you the intensity, or magnitude, of light. So CCDs really broke things open for astronomy.” 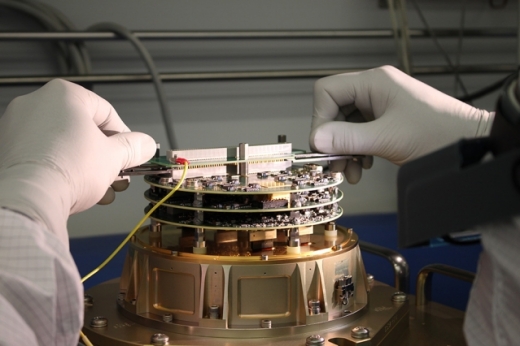 Image: A set of flight camera electronics on one of the TESS cameras, developed by the MIT Kavli Institute for Astrophysics and Space Research (MKI), will transmit exoplanet data from the camera to a computer aboard the spacecraft that will process it before transmitting it back to scientists on Earth. Credit: MIT Kavli Institute.

HETE-2’s operations led to an obvious question: Could the satellite use its optical cameras to study exoplanets? The spacecraft’s photometry proved to be insufficient for the task of identifying transits, found by the kind of dips in a star’s light that the Kepler mission would use to such success. But transit hunting stayed on Ricker’s mind, and by 2006 his team had proposed HETE-S to NASA, pitching it as a Discovery class mission. It would later become a proposal for a Small Explorer Class mission under its current name, Transiting Exoplanet Survey Satellite. A new plan emerged when NASA passed on the first TESS proposal.

What we have now is a spacecraft that will use a ‘lunar-resonant’ orbit, as this MIT news release explains. Growing out of work at NASA GSFC as well as Orbital ATK, the orbit will take TESS on a highly elliptical path between and Earth and the Moon, a stable configuration Villasenor describes this way:

“The moon and the satellite are in a sort of dance,” Villasenor says. “The moon pulls the satellite on one side, and by the time TESS completes one orbit, the moon is on the other side tugging in the opposite direction. The overall effect is the moon’s pull is evened out, and it’s a very stable configuration over many years. Nobody’s done this before, and I suspect other programs will try to use this orbit later on.”

The planned trajectory takes the spacecraft on a swing toward the Moon (with apogee near the Moon’s distance) and then a swing back toward the Earth, a stable orbit one benefit of which is that TESS will not need to perform regular thruster burns to maintain its orbit. With Kepler ending its original exoplanet survey, NASA approved the revamped TESS in 2013 as an Explorer class mission. Kepler’s success was obviously a huge motivator, demonstrating the ubiquity of planets around stars and highlighting the good science that could be done on a mission with a wider view that could scan the nearest stars.

Because many of the nearby stars of high interest are red dwarfs, TESS is built around ‘deep depletion’ CCDs that can detect light in a wide range of wavelengths into the near infrared. Once launched, TESS will begin observations in the southern hemisphere and will divide the sky into thirteen ‘stripes,’ with each of these being monitored for 27 days before the cameras are turned to the next. This method should allow almost the entire southern hemisphere sky to be monitored in the first year, after which TESS will turn its attention to the northern hemisphere.

As to data collection, here’s what NASA says:

TESS has two data collection modes: “postage stamp” images that capture light from individual stars and full-frame images that cover the entire field of view. During an observation sector, 15,000 stars selected from a carefully curated list of 200,000 stars make up the primary targets for exoplanet detection, and TESS will record their brightness every two minutes. Images covering the entire 24-by-96-degree field of view will be acquired at 30-minute intervals. Exoplanets will be found using both data products. 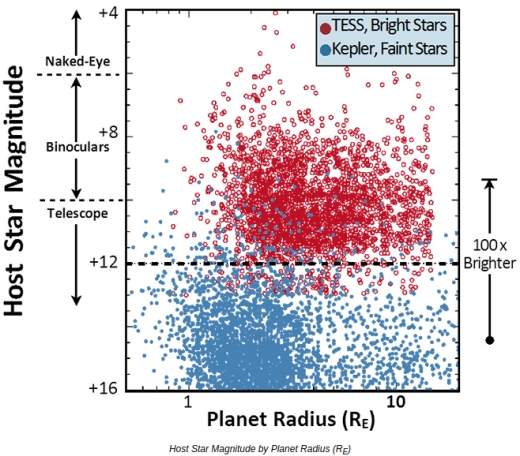 Image: From the transit data alone, scientists will be able to determine the size of the planets and orbital parameters. Ground-based follow-up observations of these objects, possible because of the brightness of the host stars, will allow the determination of the planetary masses. Combining the two, radius and mass, will allow astronomers to determine the density of planets, and hence their bulk composition (are they gas giants? water worlds? big rocks, like Earth?). In addition, transit observations can be used to study the dynamics of planetary systems, such as planet-planet interactions and mutual inclinations. Additional follow-up observations, largely from space with HST and JWST, will allow direct measurement of the atmospheric composition and structure of some planets. This will open the door for a host of new discoveries about exoplanets, and perhaps of the processes behind the formation and evolution of planetary systems. Credit: NASA GSFC.

Once in space, TESS will undergo a 60-day commissioning phase involving instrument calibration and calculations of the spacecraft’s trajectory and performance. After that, data collection commences as TESS produces what the science team will need to generate the necessary light curves. MIT’s Sara Seager and the TESS science team will go to work on the light curves, with mass as a key determinant. The TESS stars are close and bright enough to allow mass determination via ground-based radial velocity methods. As Seager says:

“Mass is a defining planetary characteristic. If you just know that a planet is twice the size of Earth, it could be a lot of things: a rocky world with a thin atmosphere, or what we call a “mini-Neptune” — a rocky world with a giant gas envelope, where it would be a huge greenhouse blanket, and there would be no life on the surface. So mass and size together give us an average planet density, which tells us a huge amount about what the planet is.”

If all goes as planned, TESS should discover, among its thousands of exoplanets, hundreds that are less than twice the size of the Earth. The primary goal here is to identify small worlds where follow-up observations can be made with current or planned telescopes. The James Webb Space Telescope will then have the opportunity to use the TESS target list for deeper investigation, and there will also be useful synergies with the European Space Agency’s CHaracterising ExOPlanets Satellite (CHEOPS), scheduled for launch next year.

But first we have to get the mission off. All eyes on Florida for tomorrow’s attempt.