More News from the ‘Planet of Doubt’

The detection of hydrogen sulfide just above the upper cloud deck of Uranus has received the nods you might expect to rotten eggs, H2S having the odor of such unappetizing objects. But this corrosive, flammable gas is quite an interesting find even if it makes a whiff of Uranian air more off-putting than it already was. Not that you’d live long enough to notice the scent if you happened to be there, as Patrick Irwin (University of Oxford, UK) is quick to note:

“If an unfortunate human were ever to descend through Uranus’s clouds, they would be met with very unpleasant and odiferous conditions. Suffocation and exposure in the negative 200 degrees Celsius atmosphere made of mostly hydrogen, helium, and methane would take its toll long before the smell.”

We can leave that excruciating end to the imagination of science fiction writers, among whom I want to mention my two favorite stories about this planet, Geoff Landis’ “Into the Blue Abyss” (2001) and Gerald Nordley’s “Into the Miranda Rift” (1993). And I always give Stanley Weinbaum full credit for the best Uranus story title of all time: “The Planet of Doubt” (1935).

Patrick Irwin is lead author on the paper discussing the H2S discovery, which is a significant one because it highlights the differences between the cloud decks on the two closer gas giants — Jupiter and Saturn — and the outer ice giants Uranus and Neptune. The former show no trace of hydrogen sulfide above the clouds, while ammonia is clearly present. In fact, most of Jupiter and Saturn’s upper clouds are laden with ammonia ice, a difference that can tell us much about the formation of the respective planets and their subsequent development. 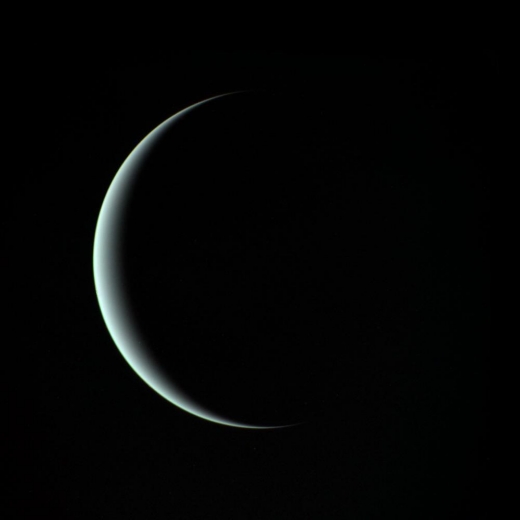 Image: This image of a crescent Uranus, taken by Voyager 2 on January 24th, 1986, reveals its icy blue atmosphere. Despite Voyager 2’s close flyby, the composition of the atmosphere remained a mystery until now. Credit: NASA/JPL-Caltech.

Leigh Fletcher, a member of the research team from the University of Leicester in the UK, notes that the balance between nitrogen and sulfur, and thus between ammonia and hydrogen sulfide, would have depended on the temperature and the location of the planet when it formed. These differences, in other words, are the signature of the gas giants’ formation history, adding to the evidence that the giant planets migrated from the position of their original formation.

Fletcher adds that when a cloud deck forms by condensation, most of the gas forming the cloud becomes embedded in a deep internal reservoir, putting it out of the view of our telescopes:

“Only a tiny amount remains above the clouds as a saturated vapour,” said Fletcher. “And this is why it is so challenging to capture the signatures of ammonia and hydrogen sulfide above cloud decks of Uranus. The superior capabilities of Gemini finally gave us that lucky break.”

Indeed. It took the 8-meter Gemini North telescope at Mauna Kea (Hawaii) to make the find, which the researchers achieved through spectroscopic analysis using the Near-Infrared Integral Field Spectrometer (NIFS), which sampled reflected light from a region just above the main visible cloud layer in the atmosphere of Uranus. Irwin describes these lines as being “just barely there,” at the outer limits of detection, but finding them in the Gemini data has solved a mystery of this planet’s atmospheric composition that persisted even through the Voyager flyby. 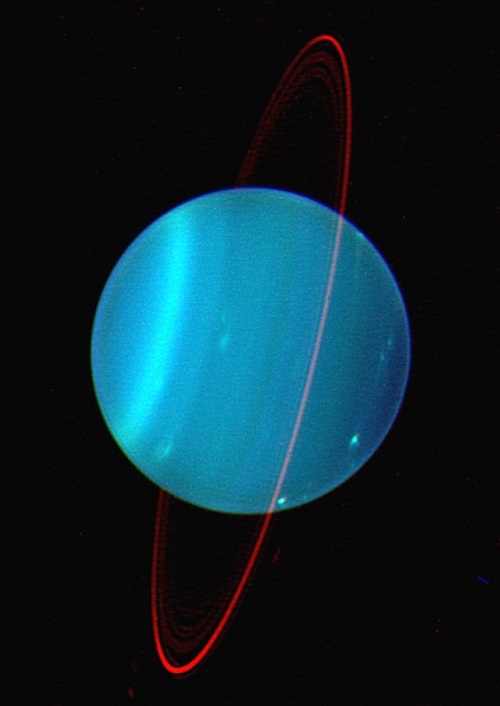 Image: Hydrogen sulfide is hardly the only interesting thing about Uranus. Near-infrared views of the planet reveal its otherwise faint ring system, highlighting the extent to which it is tilted. Credit: Lawrence Sromovsky (University of Wisconsin – Madison) / Keck Observatory.

Thus we finally identify a component of the Uranian clouds that it probably shares with Neptune, and the ‘planet of doubt’ takes us a little closer to revealing the secrets of the ice giants. The paper is Irwin et al., “Detection of hydrogen sulfide above the clouds in Uranus’s atmosphere,” published online by Nature Astronomy 23 April 2018 (abstract).