I usually get up while it’s still dark and take a walk. The idea is to shake the night’s dreams out of my head, listen to the birds waking up and pull in a lot of fresh air, all conducive to thinking about what I want to write that day. Last fall I kept noticing the glow before morning twilight that marked the zodiacal cloud, faint enough to be lost in moonlight and challenging to see when competing with city lights. But catch the right conditions and its diffuse glow is apparent, as in the photograph below, a striking example of zodiacal light’s effect. 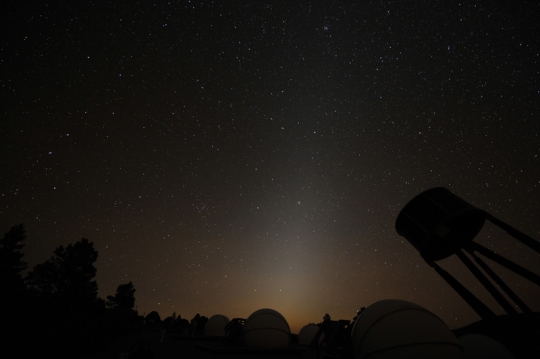 Image: Sometimes mistaken for light pollution, zodiacal light is sunlight that is reflected by zodiacal dust. It is most visible several hours after sunset on dark, cloudless nights surrounding the spring and fall equinoxes, when the Earth’s equator is aligned with the plane of the solar system. Credit: Malcol.

What we’re seeing, especially at times when the ecliptic is at its largest angle to the horizon, hence autumn and spring, is the light of the Sun reflecting off dust in the Solar System. Most of the material in this interplanetary dust cloud is concentrated along the plane of the system, and as you would expect, similar dust clouds are to be found around other stars. The Spitzer Space Telescope, for instance, has found evidence for a strong dust cloud around the star HD 69830, presumably the result of collisions within the system. No planet has yet been found there.

We often talk about interstellar gas and dust as serious issues for spacecraft moving at a substantial percentage of the speed of light. But what about interplanetary dust? The complications it poses involve how we see exoplanets, particularly those in the habitable zone.

Imagine zodiacal light perhaps a thousand times brighter than our own, enough to outshine the Milky Way. The challenge such light presents to astronomers are potentially serious but not well quantified, which is one reason why researchers using the Large Binocular Telescope Interferometer (LBTI) on Arizona’s Mt. Graham has been at work in a program called HOSTS — the Hunt for Observable Signatures of Terrestrial Systems. The team’s paper in the Astrophysical Journal gives us a look at the survey’s early results.

“There is dust in our own solar system,” says Philip Hinz, the lead for the HOSTS Survey team and associate professor of astronomy at the University of Arizona. “We want to characterize stars that are similar to our own solar system, because that’s our best guess as to what other planetary systems might have life.” 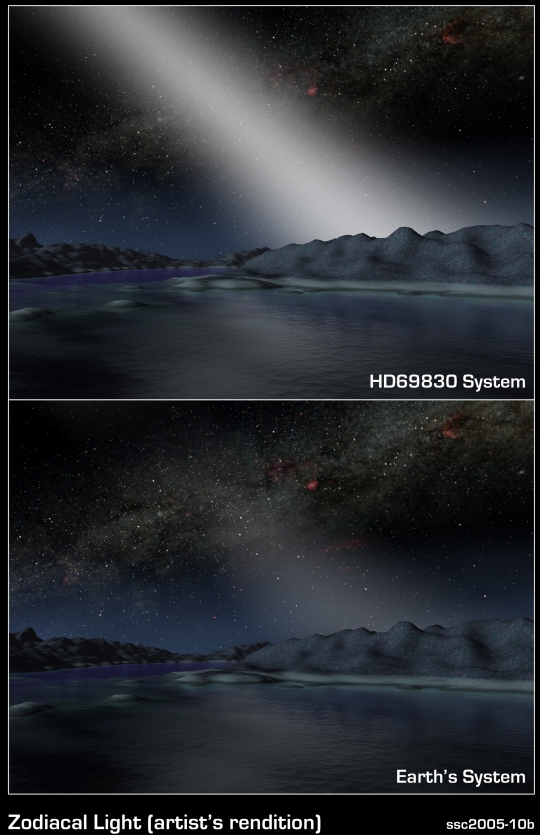 Image: This artist’s concept illustrates what the night sky might look like from a hypothetical alien planet in a star system with an asteroid belt 25 times as massive as the one in our own solar system (alien system above, ours below. Credit: NASA/JPL-Caltech.

Steve Ertel (University of Arizona) is lead author of the paper, which delves into the question of how much dust within a stellar system can affect our ability to see planets within it. All of this goes into planning for future space telescopes, with the HOSTS survey examining the issue for 30 nearby stars. What we learn from the paper is that exozodiacal dust in the stars surveyed is typically less than 15 times the amount found in our own Solar System’s habitable zone.

But planets with larger dust volumes become seriously problematic. Epsilon Eridani, long of interest because of its proximity to the Sun (10.5 light years) is one of these. Says Ertel:

“It is very nearby. It’s a star very similar to our sun. It would be a very nice target to look at, but we figured out that it would not be a good idea. You would not be able to see an Earth-like planet around it.”

Even so, Epsilon Eridani offers us a useful study in planet formation, albeit one with serious challenges for observers. This is from the paper, referring to a previously studied dust clump in the system, which could indicate:

…local dust production in the known asteroid belt and potential shepherding by a planet interior to the belt which could also be creating the clump. There is a long history of planet claims for εEri, but radial velocity detection is complicated by stellar activity induced jitter. The existence of the planet claimed by Hatzes et al. (2000) and Benedict et al. (2006) has been debated in the literature (Anglada-Escudé & Butler 2012; Howard & Fulton 2016), it is possible that a planet of period 6.8 – 7.3 yr and mass 0.6 – 1.55 MJup does orbit the star. Attempts to infer the presence of outer planets based on the ring structure are problematic due to the uncertain nature of the intrinsic disk morphology.

This is interesting stuff, although as the paper is at pains to note, we are very early in the study of dust distribution at this level. The issue can tell us something about the possibility of planets within a star system. Given the standard model — that dust is formed during asteroid collisions and spirals inward so that it is distributed throughout the entire system — the survey turned up at least one surprising result. We’ve known for some time that the star Vega has a large belt of cold dust in about the same relation to Vega as the Kuiper Belt is to our system. There is also a disk of hot dust very close to the star. From the paper:

A most puzzling result is our non-detection of warm dust around Vega, for which massive asteroid belt and Kuiper belt analogs have been detected in the mIR to fIR and a large amount of hot dust has been detected in the nIR. This raises the question of what mechanism clears the region between ∼0.5 AU and ∼5 AU from the star of dust.

We have as yet to detect planets around Vega, but the lack of habitable zone dust may be telling us about a massive planet whose gravitational influence could be clearing this area or, as Ertel notes, several Earth-mass planets. Several other stars in the survey showed, unlike Vega, no dust belts close to the star or far from it, but large amounts of warm dust in the habitable zone. A massive asteroid belt producing numerous collisions could be the culprit in such cases.

Overall, the HOSTS survey to this point has been able to make four new detections of habitable zone dust among its 30 stars; among these, three are the first to be found around Sun-like stars, and two occur around stars without any previous detections of circumstellar dust. The paper notes that the survey’s sensitivity is five to ten times better than previous results. Future exo-imaging attempts will be well served by extending the survey to a larger sample of stars, so we’ll know how the quantity of dust in a given system affects our ability to see HZ planets.

Next post: Getting Water into the Inner Solar System