Avi Loeb’s always interesting work has recently taken us into the realm of target selection for exoplanet surveys. Where should we be putting our time and money in the search for life elsewhere, and what can we do to maximize both the credibility of the investigation and the funding that it demands? These sound like pedestrian matters compared to the excitement of discovery — finding Proxima b was a lot more exciting than watching any congressional committee debate over NASA’s priorities.

But Proxima Centauri b, that fascinating world around the nearest star, fits neatly into this narrative, for reasons that contrast nicely with its own nearest neighbors, Centauri A and B. The Centauri stars are an obvious target, and one that Loeb has devoted considerable time to assessing, given his deep involvement with Breakthrough Starshot’s study of a mission there. If we find planets around Centauri A or B, are they our priority? Just where does Proxima b fit in?

And what of fascinating systems like TRAPPIST-1? We have an abundance of evidently rocky planets there, but should we prioritize this M-dwarf over G-class systems found by TESS?

Lacking infinite resources, we have to decide what to allocate where, and that means that target selection for upcoming observations, both in space and on the ground, is a priority. As SETI has demonstrated, the federal dollar can vanish, especially after years of null results. It would be disastrous if the search for non-technological life met a similar fate. All this has prompted Loeb and Manasvi Lingam, likewise at Harvard, to think about how we can maximize our chances for success, applying the kind of cost-benefit analyses often used in economics.

Their paper has just appeared in The Astrophysical Journal Letters. The search for biosignatures of necessity confronts the real world of financing and public perception. Assumptions are everything, here discussed in terms of the statistical ‘priors’ that go into making the calculation. If we had to make a choice between solar-mass stars and M-dwarfs and if (crucially) all other things were equal — i.e., if we were not constrained by our instruments and could observe each type of star with high fidelity — then Sun-like stars obviously win.

Why? Because we know of only one life-bearing world, and that is our own. Thus in a time of scarce resources, it would make sense to put our funds into searching around this kind of star. But we can’t do away with the observational problems that exist, and given these, M-dwarfs stand out as the better target because given the current state of the art, we can more readily hope to delve into their atmospheres with our rapidly evolving observatories, probing their chemistry and looking for biosignatures. Earth-class planets around M-dwarfs offer us deep transits and the earliest prospects for using transmission spectroscopy to study them.

We’re thus pulled in different directions, based on our priors. From the paper;

If we consider a flat prior, where the probability of life is independent of the choice of star, focusing on planets around M-dwarfs is more advantageous because the detection of biosignatures becomes much easier. On the other hand, there is mounting evidence, especially based on considerations of space weather, that the potential habitability of Earth-analogs around M-dwarfs might be much lower relative to their counterparts around G-type stars. Hence, if we adopt a prior where the habitability is selectively suppressed around low-mass stars, we conclude that it would be more advantageous to focus on the search for life on planets orbiting Sun-like stars relative to those around M-dwarfs.

What to do? Obviously, press on in our analysis of both kinds of stars as the possible home for life. We’ve looked many times in these pages at the problems M-dwarfs present, usually in terms of tidal locking and the stellar flare activity common especially to younger stars. As the paper notes, the growing concern about space weather, which can involve stripping of the atmosphere itself or its serious degradation, makes the question even more problematic. 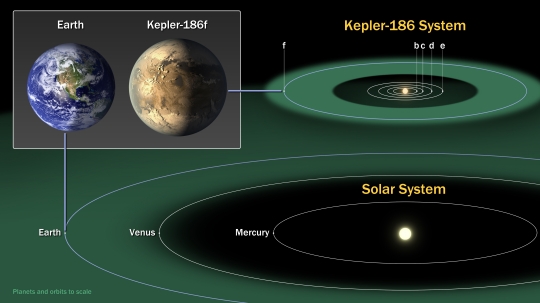 Image: This diagram compares the planets of our inner solar system to Kepler-186, a five-planet system about 500 light-years from Earth in the constellation Cygnus. The planets of Kepler-186 orbit an M dwarf, a star that is half the size and mass of the Sun. What share of our resources should go into investigating M-dwarfs as opposed to solar-type stars? Credit: NASA Ames/SETI Institute/JPL-Caltech.

We have no final answers here, but as the analysis continues, Loeb and Lingam are pointing out that if habitability around M-dwarfs is effectively suppressed by factors like these, then prioritizing planets around solar-type stars makes the most sense. This is not to say that we would not, in an ideal world, press on with strong efforts in both directions. But I think the authors’ point is telling: To achieve the funding levels we need, the community must be conducting a search that is both credible and can demonstrate a measure of success.

Will our search evolve in the direction of solar-type stars? Here Alpha Centauri makes an interesting bellwether. We have the aforementioned Proxima Centauri b, an Earth-mass planet in the habitable zone of a close red dwarf. But as the angular separation between the primary stars Centauri A and B continues to increase, we should finally be able to make a call on Earth-mass planets orbiting either or both of these stars, the G-class A and the K-class B.

Finding a planet in the habitable zone of one of the primary Centauri stars would present us with an abundance of targets closer to us than any other stellar system. The ongoing work on assessing M-dwarfs and the habitability issues they raise will help us decide where to concentrate our resources. Maximizing the chances for detection may eventually lead us to choices other than the most readily studied stars, and back to stars more like our own.

Previous post: Getting Water into the Inner Solar System