Asteroid at the Edge

Our current depictions of conditions in the early Solar System involve titanic change, with the giant planets moving inward and then outward, creating gravitational havoc and scattering inner system objects in all directions. Such disruptions doubtless happen in other infant planetary systems and because of them, we can predict a large population of so-called ‘rogue’ planets that move through the galaxy dissociated from any star. Closer to home, there may well be small objects kicked into extreme orbits that bear evidence of these migrations.

The ‘grand tack’ hypothesis sees Jupiter forming at around 3.5 AU, well in from its current 5.2 AU orbital position, with migration all the way in to 1.5 AU before a reversal of course and movement outward to its current position. Imagine Jupiter plowing through the asteroid belt — twice — and the chaos of its passage, producing a wide scattering in asteroid orbital inclinations and eccentricities. The ‘Nice model’ likewise involves gas giant migration, and has been invoked to explain the Late Heavy Bombardment as well as populations like the Kuiper Belt.

Now we learn of an observation that may teach us something about these events. A Kuiper Belt Object tagged 2004 EW95 is carbon-rich, typical of other carbonaceous asteroids in having a dark surface distinctive of carbon’s presence. This KBO, in other words, looks to be much like a main belt asteroid of the C-type, but it’s found at the edge of the system. The unusual spectral details turned up in work from Tom Seccull (Queen’s University Belfast) and colleagues, who used data from multiple instruments at the European Southern Observatory’s Very Large Telescope. 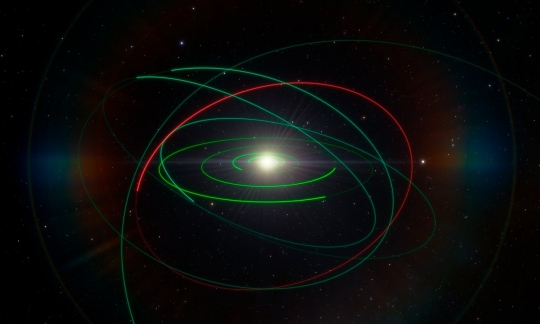 Image: The early days of our Solar System were a tempestuous time. Theoretical models of this period predict that after the gas giants formed they rampaged through the Solar System, ejecting small rocky bodies from the inner system to far-flung orbits at great distances from the Sun. Credit: ESO.

2004 EW95 had already been studied by Wesley Fraser, a member of Seccull’s team at Belfast, and it was in those observations, using the Hubble instrument, that it became clear that the object’s reflectance spectrum differed from the Kuiper Belt Objects around it. Whereas their spectra tend to be all but featureless, 2004 EW95 stood out. That merited a closer look through the VLT, producing an unusual observing challenge.

Imagine trying to study a dark object a mere 300 kilometers across as it moves through its orbit four billion kilometers from Earth. Co-author Thomas Puzia (Pontificia Universidad Católica de Chile) likens the task to observing a mountain of coal against a pitch black sky. The VLT’s X-Shooter spectrograph and FORS2 spectrograph and imager offered the precision needed. The paper calls the reflectance spectrum found here ‘unusual’ and states that it is:

…exhibiting a large drop in its near-UV reflectance and a broad shallow optical absorption feature centered at ∼700 nm, which is detected at greater than 4σ significance. These features, confirmed through multiple epochs of spectral photometry and spectroscopy, have respectively been associated with ferric oxides and phyllosilicates. The spectrum bears striking resemblance to those of some C-type asteroids, suggesting that 2004 EW95 may share a common origin with those objects.

The presence of ferric oxides and phyllosilicates marks 2004 EW95 as a kind of KBO that had never been found before, implying an origin far closer to the Sun. The phyllosilicate feature in the spectra, say the authors, points to significant heating in this object’s history, possibly radiogenic or the result of either solar irradiation or one or more collisions.

Each of these two features has been independently observed by two separate instruments, and are present in the reported reflectance spectra regardless of which of our solar calibrator targets, or which of two separate spectral extraction techniques, were used in our data reduction.

Thus 2004 EW95 takes us from a prediction made by two dynamical models of the early Solar System and fulfills that prediction in an actual KBO. The ‘grand tack’ model assumes that the early migrations of Jupiter and Saturn would have scattered carbonaceous asteroids that had formed near them and flung them into the outer Solar System, and we would thus expect that 2005 EW95 is not alone in the Kuiper Belt. From the paper:

The striking similarity between 2004 EW95 and certain C-type [carbonaceous] asteroids points to the plausible idea that 2004 EW95 shares a common origin with these objects. Taken together, the spectroscopic similarity to C-type asteroids and the orbital properties of 2004 EW95 are consistent with the idea that this object may have formed near Jupiter among the primordial C-type asteroids (Walsh et al. 2011) and was subsequently emplaced into the Kuiper Belt by the migrating planets.

So we have an object whose spectrum resembles those of primitive carbonaceous asteroids orbiting the Sun in a stable mean motion resonance with Neptune. Its orbit is highly inclined and eccentric, likely the result of dynamical instability and consistent with gas giant migration.