The Seasons of Exoplanetary Life

Looking for biological products in planetary atmospheres is how we’ll first study exoplanetary life, assuming it exists. The tools for characterizing atmospheres have already developed to the point that we are examining the gases surrounding some ‘hot Jupiters,’ and even talking about the movement of clouds — exoplanet meteorology — on giant worlds. The hope is that TESS will find targets that we can then investigate with new space telescopes.

The way forward is exciting, but my guess is that as we start looking into the atmospheres of transiting planets around nearby red dwarfs, the most accessible targets in the near future, we’re going to find ourselves awash in controversy. Did we just find oxygen? Maybe we’re on the way to a biosignature detection, but then again, ultraviolet radiation can break down atmospheric water to produce oxygen. For that matter, UV can split carbon dioxide molecules.

What about methane? Abiotic methane from geothermal activity on the surface could account for that, and there are other production mechanisms as well. Ideally, we’ll find gases that are many orders of magnitude out of thermochemical equilibrium with the planet’s atmosphere. A combination, say, of an oxidizing gas like oxygen and a reducing gas like methane — these shouldn’t co-exist without some replenishing source — is suggestive of metabolism. But these are going to be tough detections, and we’re likely to see huge controversy over just how significant the early findings are. 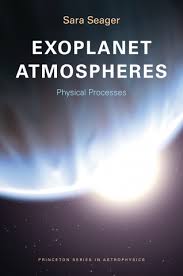 We have to start somewhere, but bear in mind that life on Earth produces thousands of different biosignature gases, most of which are in such small quantities that they accumulate little in the atmosphere. Most are produced for reasons specific to the organism. Sara Seager is doing brilliant work compiling all the molecules that exist in a planetary atmosphere under conditions of temperature and pressure similar to the Earth. This is by way of compiling a comprehensive list of biosignature gases and the false positive possibilities that accompany them.

All of which gets us to an interesting new take on biosignature detection out of the University of California at Riverside. What lead author Stephanie Olson and team have produced is what is being described as the first quantitative framework for dynamic biosignatures based on seasonal changes. The idea here is straightforward: Axial tilt creates weather changes and also changes in atmospheric composition. Thus a northern hemisphere summer shows increased plant growth, hence lower levels of carbon dioxide and higher levels of oxygen.

“Atmospheric seasonality is a promising biosignature because it is biologically modulated on Earth and is likely to occur on other inhabited worlds,” Olson says. “Inferring life based on seasonality wouldn’t require a detailed understanding of alien biochemistry because it arises as a biological response to seasonal changes in the environment, rather than as a consequence of a specific biological activity that might be unique to the Earth.”

We can also keep in mind that extremely elliptical orbits could produce seasonality on extrasolar planets in the same way that axial tilt does, which could widen the range of planets under future investigation. Homing in on the seasonal formation and loss of oxygen, carbon dioxide and methane and their detection through spectroscopy, the authors also extended the work to include planets with low oxygen content, where fluctuations on a world like the early Earth might be detectable. Here, ozone (O3) turns out to be an easier marker to identify through seasonal variability than oxygen (O2).

That’s a useful finding, because after all, a planet like the early Earth would have shown a markedly different atmospheric composition than the blue and green world of today. Start with hydrogen and helium in an early atmosphere and add in water vapor, carbon dioxide and sulphur from volcanic eruptions. The process is stochastic (i.e., randomly determined); when does oxygen appear? Ozone? Ideally, we’d like to see a world with water vapor, oxygen, ozone and carbon dioxide because these are strong absorbers that show up well in planetary spectra.

I notice that the atmosphere of ‘early Earths’ is something that co-author Timothy Lyons, also at UC-Riverside and director of the Alternative Earths Astrobiology Center, emphasizes:

“We are particularly excited about the prospect of characterizing oxygen fluctuations at the low levels we would expect to find on an early version of Earth,” Lyons says. “Seasonal variations as revealed by ozone would be most readily detectable on a planet like Earth was billions of years ago, when most life was still microscopic and ocean dwelling.” 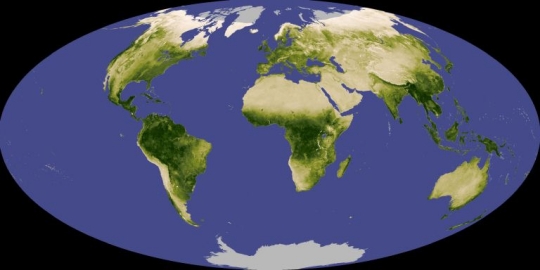 Image: Satellites monitor how ‘greenness’ changes with Earth’s seasons. UC-Riverside scientists are studying the accompanying changes in atmospheric composition as a marker for life on distant planets. Credit: NASA.

In any case, I fall back on my prediction. We are going to start getting exoplanet atmospheric data around rocky worlds orbiting red dwarfs within the next decade or so, and our results will be ambiguous at best. Erwin Schrödinger said that living matter ‘avoids the decay into equilibrium’ by fighting entropy, which is why finding out of balance gases co-existing would be highly significant. But while oxygen is comparatively easy to detect, trace methane is not.

I expect a battle royal to break out over the significance of such gases in the amounts we find them, and the quest to filter out all the false positives may take us many years.

The paper is Olson et al., “Atmospheric Seasonality as an Exoplanet Biosignature,” Astrophysical Journal Letters Vol. 858, No. 2 (9 May 2018). Abstract. On Sara Seager’s work on potential biosignature gases, see “Toward a List of Molecules as Potential Biosignature Gases for the Search for Life on Exoplanets and Applications to Terrestrial Biochemistry,” Astrobiology. June 2016, 16(6): 465-485 (abstract).

Next post: The Habitable Zone: The Impact of Methane