Galileo Evidence for Plumes on Europa

Once again we take advantage of older databanks to tease out new information. Europa is the case in point this morning, with Galileo data — magnetic field and plasma wave observations from 1997 — being brought in as evidence for a water vapor plume rising from the surface. The Galileo flyby took the craft closer than 400 kilometers, where a brief spike in plasma density was detected along with a concurrent decrease in magnetic field magnitude and a bend in the direction of the field. The data are consistent with a plume interacting with Jupiter’s plasma outflow, and support earlier Hubble indications of possible plumes on the moon.

We have no firm measurement of the thickness of Europa’s ice, but if we are to get to that fascinating ocean now known to exist below the surface, we have to contend with penetrating it. Plumes from the interior would be helpful indeed, as Enceladus showed us at Saturn. Flying a spacecraft through a plume lets us measure its ingredients and sample the ocean below. So this new work, which has just been published in Nature Astronomy, offers the prospect of plume sampling via close flyby for upcoming missions like Europa Clipper. 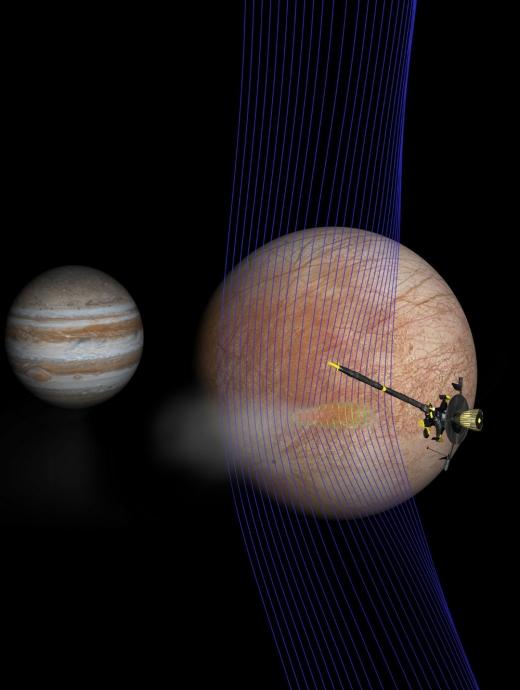 Image: Artist’s illustration of Jupiter and Europa (in the foreground) with the Galileo spacecraft after its pass through a plume erupting from Europa’s surface. A new computer simulation gives us an idea of how the magnetic field interacted with a plume. The magnetic field lines (depicted in blue) show how the plume interacts with the ambient flow of Jovian plasma. The red colors on the lines show more dense areas of plasma. Credit: NASA/JPL-Caltech/Univ. of Michigan.

As it happens, lead author Xianzhe Jia (University of Michigan) is co-investigator for two instruments designed for Europa Clipper, and it was another member of the Europa Clipper science team, Melissa McGrath (SETI Institute) who prompted the deeper dive into Galileo data, inspired by the intriguing observations from Hubble. The space telescope was operating at the far edge of its capabilities, leaving the prospect of Europan plumes ambiguous, but the location of one of the Hubble ‘plumes’ turned out to be useful. Says Jia:

“One of the locations she mentioned rang a bell. Galileo actually did a flyby of that location, and it was the closest one we ever had. We realized we had to go back. We needed to see whether there was anything in the data that could tell us whether or not there was a plume.”

What Hubble observed at the site appeared to rise some 200 kilometers above the surface of Europa, consistent with the Galileo data. As the paper notes, Galileo acquired magnetomer data on eight targeted passes of Europa during its eight years in Jovian orbit, but only two of these passes came closer to the surface than 400 kilometers, a height at which a plume might give off both a plasma and magnetic field signature. As the paper notes:

Both passes crossed the trailing hemisphere of Europa (E12 near the equator and E26 at high southern latitude) and recorded short time-duration, large-amplitude perturbations accompanied by a sharp decrease of the field magnitude near closest approach. A previous study of the potential effect of plumes on Europa’s plasma interaction suggested that the magnetic perturbations during the E26 flyby could be associated with atmospheric inhomogeneity resulting from a plume. Here, we show that a localized signature in the MAG data acquired on Galileo’s closest encounter with Europa (E12 flyby) is fully consistent with the perturbations expected if the spacecraft crossed a plume rising above the nearby surface.

Image: This is Figure 3 from the paper. Caption: Location of the modeled plume on Europa’s surface. a,b, Perspectives from a longitude of 270° W (a) and from above the northern pole (b). The surface features shown on the sphere were extracted from a global map of Europa compiled by the United States Geological Survey. The cyan iso-surface of constant neutral density illustrates the shape and location of the modelled plume, and the magenta traces show the Galileo trajectory. The green ellipse in a indicates the location of a putative plume imaged by Hubble. Credit: Jia et al.

Certainly the experience we gained with Cassini at Enceladus has helped to investigate this phenomenon, for we know that material within the plumes, once ionized, has effects on the magnetic field similar to the bend in the field observed in the Galileo data. The spacecraft’s plasma wave spectrometer likewise proved useful, examining the interactions caused by charged particles above the Europan surface, and clearly demonstrating a spike in intensity.

Using 3D modeling tools developed by his team, Jia was able to simulate the interactions of plasma with bodies like Europa, producing simulated plumes that matched the Galileo data and were consistent with what Hubble had revealed.

“There now seem to be too many lines of evidence to dismiss plumes at Europa,” says Robert Pappalardo, Europa Clipper project scientist at NASA’s Jet Propulsion Laboratory in Pasadena, California. “This result makes the plumes seem to be much more real and, for me, is a tipping point. These are no longer uncertain blips on a faraway image.”

We can hope that Europa Clipper will get off as early as mid-2022, for its low-altitude flybys should allow us to sample dust particles and frozen liquid, a glimpse into the moon’s dark interior. As you would imagine, these findings have the Europa mission team examining orbital trajectories that will allow such measurements to be taken. The Europan plumes certainly aren’t as visible as the plumes of Enceladus, but if what Galileo encountered really was a plume during its eight-year mission, then plumes must be occurring on relatively short timescales.

The paper is Jia et al., “Evidence of a plume on Europa from Galileo magnetic and plasma wave signatures,” published online at Nature Astronomy 14 May 2018 (full text).

Next post: Perspective on the View from Out There