TESS: The View into the Galactic Plane

I want to be sure to get the first image from TESS, the Transiting Exoplanet Survey Satellite, into Centauri Dreams, given the importance of the mission and the high hopes riding on it as the next step in exoplanet exploration. Now we move from the Kepler statistical survey methodology to a look at bright, nearby stars, and plenty of them. TESS will cover an area of sky far larger than the amount of sky we see in this image, which looks out along the plane of the galaxy from a perspective that matches southern skies on Earth. 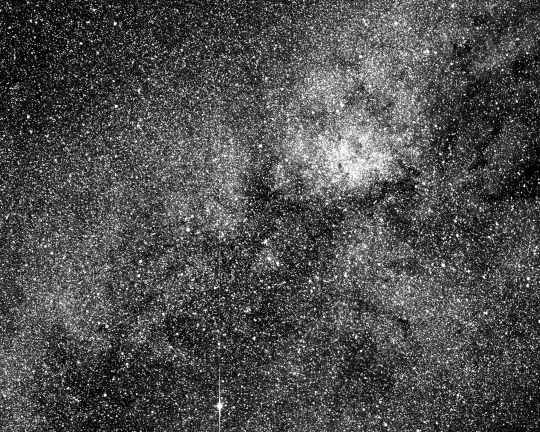 Image: This test image from one of the four cameras aboard the Transiting Exoplanet Survey Satellite (TESS) captures a swath of the southern sky along the plane of our galaxy. TESS is expected to cover more than 400 times the amount of sky shown in this image when using all four of its cameras during science operations. Credits: NASA/MIT/TESS.

Showing some 200,000 stars, the image is centered on the southern constellation Centaurus, with a bit of the Coalsack Nebula at the upper right and, if you look along the bottom edge, the bright star Beta Centauri readily visible. Here I add the usual caution that Beta Centauri has nothing to do with Alpha Centauri — it is a separate place and interesting in its own right. About 400 light years out, this is, like Alpha Centauri, a triple system, and with Alpha Centauri, it serves as one of the pointer stars to the lovely asterism known as the Southern Cross.

This first TESS image is a test of the spacecraft’s four cameras, with a science-quality image expected to be released in June. Meanwhile, the spacecraft is easing into its highly elliptical orbit, with a final thruster burn scheduled for May 30. Science operations should commence in mid-June once orbital adjustments and camera calibrations are completed. 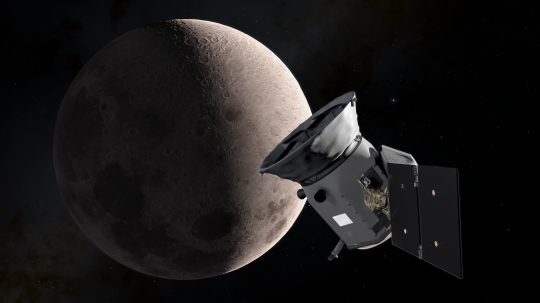 Image: An illustration of TESS as it passed the Moon during its lunar flyby. This provided a gravitational boost that placed TESS on course for its final working orbit. Credit: NASA’s Goddard Space Flight Center.

This first story on an operational TESS gives me echoes of New Horizons, which we followed here from launch to Pluto and now on to MU69 and whatever KBO may be next. Some people caution against anthropomorphizing machines, a human tendency when we deal with our pets, applying human perspectives to creatures considerably different than ourselves. To me the distinction is meaningless. We apply our passions and values to the things that matter to us, and New Horizons and TESS fit that bill for me. I recognize that spacecraft are not ‘creatures’ but my own values of commitment and purpose ride with these machines that can feel neither.

Previous post: Is Asteroid 2015 BZ509 from another Stellar System?