The ongoing work of mining New Horizons’ abundant data from the outer system continues at a brisk pace. But missions occur in context, and we also have discoveries made at comet 67P/Churyumov-Gerasimenko by the European Space Agency’s Rosetta probe to bring to bear. The question that occupies Christopher Glein and Hunter Waite (both at SwRI) is how to explain the chemistry New Horizons found at Pluto and what it can tell us about Pluto’s formation.

At the heart of their new paper in Icarus is the question of Pluto’s molecular nitrogen (N2), which plays a role on that world similar to methane on Titan, water on Earth and CO2 on Mars. All are volatiles, meaning they can move between gaseous and condensed forms at the temperature of the planet in question. We’ve learned that solid N2 is the most abundant surface ice visible to spectroscopy on Pluto, as witness the spectacular example of Sputnik Planitia. 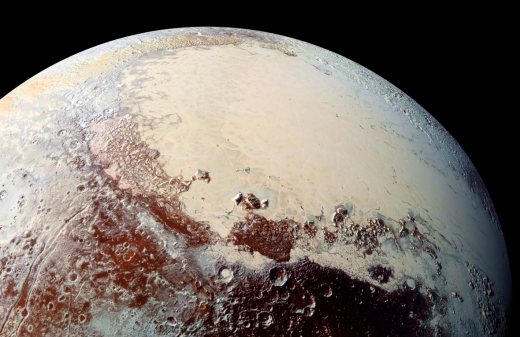 Anyone glued to their screen during New Horizons’ 2015 flyby will recall the surprise generated by Sputnik Planitia’s youthful terrain, now believed to be the result of the flow of solid N2. Scientists also found that nitrogen can sublimate at Pluto’s surface, so we have a volatile cycle that causes surface pitting and frosts, one that likewise accounts for the existence of Pluto’s atmosphere. Given the importance of nitrogen, the issue of its origin looms large because of what it can tell us about Pluto’s formation, and by extension that of other outer system objects.

Here the crossover with the Rosetta data is helpful. What Glein and Waite are suggesting is that Pluto may owe its existence to comets, accumulating the N2 observed by New Horizons through accretion. Says Glein, with a nod to the nitrogen-rich ice of Sputnik Planitia:

“We’ve developed what we call ‘the giant comet’ cosmochemical model of Pluto formation. We found an intriguing consistency between the estimated amount of nitrogen inside the glacier and the amount that would be expected if Pluto was formed by the agglomeration of roughly a billion comets or other Kuiper Belt objects similar in chemical composition to 67P, the comet explored by Rosetta.” 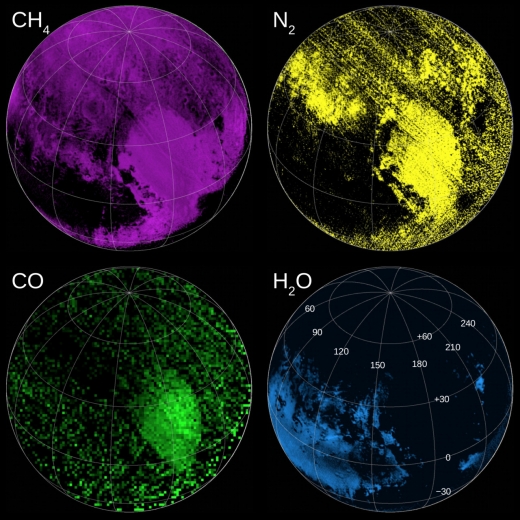 Whether Pluto formed from the accretion of cometary ices or from materials with a chemical composition closer to that of the solar nebula remains an open question, with the paper addressing both possibilities and finding both to be consistent with the data. Tangled up with the question is the issue of carbon monoxide (CO) and the low CO/N2 ratios observed at Pluto. The problem is that these ratios should be much higher than what we find in Pluto’s atmosphere. How to explain the missing carbon monoxide?

There are implications here for what may still lie beneath the icy world’s surface. From the paper:

…we have performed aqueous geochemical calculations showing the great thermodynamic instability of CO dissolved in cold (liquid) water, even for a restricted metastable equilibrium system… The destruction of CO to formate or carbonate species… would be strongly favored if Pluto has or had a subsurface ocean. This mechanism can be applied to the cometary model, but not to the solar model as the CO/H2O ratio is too large in the latter. Hence, the cometary model seems preferable, with more options to reconcile the CO/N2 ratio.

And implications for Pluto’s continuing surface activity are also present:

We note that the burial and aqueous destruction hypotheses for missing CO are not necessarily mutually exclusive. A major implication of these processes is that the observed composition of Pluto cannot be completely primitive, even if its N2 is indeed primordial. This resonates with the dynamic geology seen by New Horizons (Moore et al., 2016).

Numerous questions remain to be answered, but the authors propose an evolutionary scenario that begins with Pluto accumulating cometary nitrogen and CO, with subsequent interactions accounting for loss of the CO and outgassing of N2. This takes into account the surface accumulation of the latter at Sputnik Planitia and cometary ‘resupply’ of a small amount of CO that mixes with surface nitrogen. This is one of various possible scenarios, but it is consistent with the data the paper examines and points to future work.

Among many questions remaining, the issue of how much N2 might be inside Pluto looms large, as does its distribution in the crust, rocky core and possible liquid water ocean. We’d also like to know whether the abundance of N2 found at comet 67P is representative of the cometary population at large and of larger icy Kuiper Belt Objects.

And among ten questions posed by the authors in their conclusion, this one is significant: Why do we lack any detection of CO2 on Pluto while finding it on Triton, and is there a consistent way of resolving the question with regard to the lack of CO on both bodies? This gets us into the broad issue of the mechanisms that provide volatiles to worlds like these. Check the paper’s conclusion for a useful wrap-up of future directions to be taken with the New Horizons data, and the areas where new data will be required.