One of the benefits of having Alpha Centauri as our closest stellar neighbor is that this system comprises three different kinds of star. We have the familiar Centauri A, a G-class star much like our Sun, along with the smaller Centauri B, a K-class star with about 90 percent of the Sun’s mass. Proxima Centauri gives us an M-dwarf, along with the (so far) only known planet in the system, Proxima b. Questions of habitability here are numerous. Along with possible tidal locking, another major issue is radiation, since M-dwarfs are known for their flare activity.

As we learn more about the entire Alpha Centauri system, though, we’re learning that the two primary stars are much more clement. They may have issues of their own — in particular, although stable orbits can be found around both Centauri A and B, we still don’t know whether planets are likely to have formed there — but scientists studying data from the Chandra X-ray Observatory have found that levels of X-ray radiation are far lower here than around Proxima Centauri.

This is good news, because high radiation levels could prove fatal for surface life, with the additional effect of possible damage to planetary atmospheres. Chandra has been involved in a multi-year campaign targeting Centauri A and B stretching back to 2005, with observations every six months. No other X-ray observatory is capable of resolving the two primary stars during their current close orbital approach. What we wind up with is a look at radiation activity over time, covering a period analogous to our own Sun’s 11-year sunspot cycle. 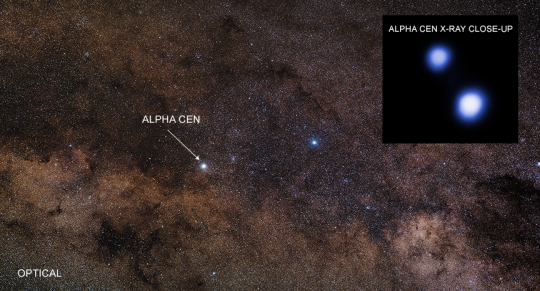 Image: A new study involving long-term monitoring of Alpha Centauri by NASA’s Chandra X-ray Observatory indicates that any planets orbiting the two brightest stars are likely not being pummeled by large amounts of X-ray radiation from their host stars. This is important for the viability of life in the nearest star system outside the Solar System. Chandra data from May 2nd, 2017 are seen in the pull-out, which is shown in context of a visible-light image taken from the ground of the Alpha Centauri system and its surroundings. Credit: X-ray: NASA/CXC/University of Colorado/T.Ayres; Optical: Zdeněk Bardon/ESO.

Tom Ayres (University of Colorado Boulder) presented these results at the just concluded meeting of the American Astronomical Society in Denver. Any planets in the habitable zone of Centauri A would actually receive a lower dose of X-rays, on average, than planets around the Sun, while the X-ray dosage for a planetary companion of Centauri B is about 5 times higher than the Sun. This contrasts sharply with Proxima Centauri’s planet, which would receive an average dosage 500 times larger than the Earth, rising to 50,000 times higher during a major flare. If we find planets around either A or B, it may be that Breakthrough Starshot will want to prioritize these at the expense of the more endangered Proxima b.

In the animation below, we can see the proper motion of Centauri A and B.

Image: This movie shows Chandra observations of Alpha Centauri A and B taken about every 6 months between 2005 and 2018. Alpha Cen A is the star to the upper left. The motion of the pair from left to right is their “proper motion”, showing the movement of the pair in our galaxy with respect to the solar system. The change in relative positions of the pair shows the motion in their 80 year long orbit and the wobbles show the small apparent motion (called parallax) caused by the year long orbit of the Earth around the Sun. The Chandra images are shown in black and white. To place these semi-annual images in context, the two colored circles show the expected motion of Alpha Cen A (yellow) and Alpha Cen B (orange) when taking account of proper motion, orbital motion and parallax. The size of the circles is proportional to the X-ray brightness of the source. Credit: Thomas Ayres.

Ayres has also written up some of the results in Research Notes of the American Astronomical Society, where I learned that the central AB pair has actually been under X-ray study for almost four decades, dating back to the late 1970s and the HEAO-2 satellite (also known as the Einstein Observatory), which was the first fully imaging X-ray telescope ever put into space. Subsequent observations were conducted by ROSAT (Röntgen-Satellit), XMM-Newton and now Chandra. Here, Ayres explains why X-ray studies may help us learn about habitability in this system as well as giving us information closer to home:

The modest coronae (106 K) of α Cen AB are on par with our own Sun’s. X-ray studies of these objects can help us understand how the “Dynamo” in the stellar interior produces the episodic surface magnetic eruptions at the core of solar activity and “Space Weather.” The hard radiation and particle bombardment from flares and coronal mass ejections can affect Planet Earth, so the interest is not solely academic. Exoplanets of other sunlike stars can be exposed to analogous extreme high-energy transients from their hosts, with perhaps serious repercussions for habitability. 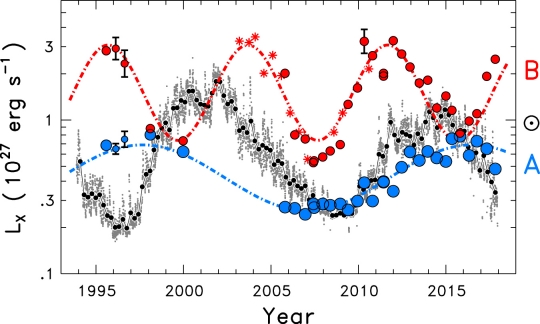 I was fortunate enough to be in the audience when Ayres spoke to Breakthrough Discuss in 2016 in a presentation called “The Ups and Downs of Alpha Centauri.” Here’s Breakthrough’s video of that talk, which I highly recommend.