Lightning in the Jovian Clouds

The longer we can keep a mission going in an exotic place, the better. Sometimes longevity is its own reward, as Curiosity has just reminded us on Mars. After all, it was only because the rover has been in place for six years that it was able to observe what scientists now think are seasonal variations in the methane in Mars’ atmosphere. Thus the news that Juno will remain active in Jupiter space is heartening, and in this case necessary. The mission is now to operate until July of 2021, an additional 41 months in orbit having been approved. More time on station allows Juno to complete a primary science mission that had appeared in jeopardy.

The reason: Problems with helium valves in the spacecraft’s fuel system resulted in the decision to remain in the present 53-day orbit instead of the 14-day ‘science orbit’ originally planned, and that has extended the time needed for data collection. Thus the lengthening of operations there not only allows further time for discovery but essentially enables the spacecraft to achieve its original science objectives. NASA has now funded Juno through FY 2022, allowing for the end of prime operations in 2021 and data collection and mission close-out carrying into 2022.

“This is great news for planetary exploration as well as for the Juno team,” said Scott Bolton, principal investigator of Juno, from the Southwest Research Institute in San Antonio. “These updated plans for Juno will allow it to complete its primary science goals. As a bonus, the larger orbits allow us to further explore the far reaches of the Jovian magnetosphere — the region of space dominated by Jupiter’s magnetic field — including the far magnetotail, the southern magnetosphere, and the magnetospheric boundary region called the magnetopause. We have also found Jupiter’s radiation environment in this orbit to be less extreme than expected, which has been beneficial to not only our spacecraft, but our instruments and the continued quality of science data collected.”

In its present 53-day polar orbit, Juno moves as close as 5,000 kilometers from the Jovian cloud tops and backs out as far as 8 million kilometers. It’s an orbit that minimizes exposure to Jupiter’s radiation belts even as it allows the craft to study the planet’s entire surface over the course of its time there. The latest work on data collected during these orbits comes in two papers, one in Nature, the other in Nature Astronomy, that look at Jovian lightning and how it is produced.

The first analysis draws on data from Juno’s Microwave Radiometer Instrument (MWR), which can record emissions at a wide range of frequencies. Because lightning discharges emit radio waves, Juno can keep an eye on lightning activity on the gas giant. Jovian lightning has also been detected by optical cameras aboard spacecraft as localized flashes of light. Shannon Brown (JPL), lead author of the paper on this work, points out that until Juno, the radio signals spacecraft have detected all came from the Galileo probe, Cassini and the two Voyager flybys, but these were all found in the kilohertz range of the radio spectrum, despite attempts to find signals in the megahertz range. The reason for the discrepancy has been a mystery.

After all, terrestrial lightning emits a broad signal over the radio spectrum up to gigahertz frequencies. Juno is helping to resolve the discrepancy, detecting Jovian lightning ‘sferics’ (broadband electromagnetic impulses) at 600 MHz. That implies that the planet’s lightning discharges are not fundamentally distinct from the lightning we experience on Earth. During Juno’s first eight orbits of Jupiter, the spacecraft detected 377 sferics, finding them prevalent in the polar regions and absent near the equator, with the most frequent occurring in the northern hemisphere at latitudes higher than 40 degrees north.

”We think the reason we are the only ones who can see it is because Juno is flying closer to the lighting than ever before,” says Brown, ”and we are searching at a radio frequency that passes easily through Jupiter’s ionosphere.”

But what would account for the fact that Earth’s lightning activity is highest near the equator, while Jupiter’s is most frequent in the polar regions? Brown and company suggest that Jupiter’s poles allow more warm air to rise from within because there is less upper-level warmth from sunlight. Possibly the heating from sunlight at Jupiter’s equator can stabilize the upper atmosphere to inhibit warm air rising from below as it does at the poles. If this is the case, we would expect the polar regions to experience the convective forces that lead to lightning.

From the paper’s abstract:

Because the distribution of lightning is a proxy for moist convective activity, which is thought to be an important source of outward energy transport from the interior of the planet, increased convection towards the poles could indicate an outward internal heat flux that is preferentially weighted towards the poles. The distribution of moist convection is important for understanding the composition, general circulation and energy transport on Jupiter. 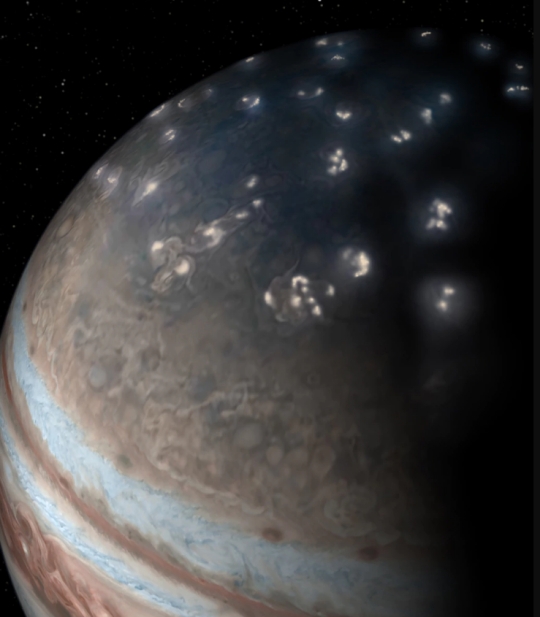 Image: This artist’s concept of lightning distribution in Jupiter’s northern hemisphere incorporates a JunoCam image with artistic embellishments. Data from NASA’s Juno mission indicates that most of the lightning activity on Jupiter is near its poles. Credit: NASA/JPL-Caltech/SwRI/JunoCam.

What scientists now have to explain, as this JPL news release points out, is why the north pole is so much more active than the south. Our understanding of energy flow and circulation on Jupiter is clearly a work in progress, something the Juno data trove may help us untangle. Meanwhile, Ivana Kolmašová (Czech Academy of Sciences, Prague) and colleagues have offered what NASA is calling ‘the largest database of lightning-generated low-frequency radio emissions around Jupiter (whistlers) to date.’ The dataset includes more than 1600 signals collected by Juno’s Waves instrument, 10 times the number recorded by Voyager 1.

We’re not only further along in detection technology than in the Voyager days, with advances in microwave and plasma wave instruments to sense lightning amidst Jupiter’s emissions, but we’re also dealing with a spacecraft that has come closer to Jupiter than any other craft in history, allowing a vast increase in signal strength. The knowledge that Juno will now be able to proceed through its entire primary data collection mission is thus a cause for celebration.