New Horizons: The Beauty of Hibernation

I’ve always had a great interest in Iceland, stemming from my studies of Old Norse in graduate school, when we homed in on the sagas and immersed ourselves in a language that has changed surprisingly little for a thousand years. There’s much modern vocabulary, of course, but the Icelandic of 1000 AD is much closer to the modern variant than Shakespeare’s English is to our own. Syntactically and morphologically, Icelandic is a survivor, and a fascinating one.

New Horizons’ journey to Kuiper Belt Object MU69 occasions this reverie because the mission team has named the object Ultima Thule, following an online campaign seeking input from the public that produced 34,000 suggestions. The word ‘thule’ seems to derive from Greek, makes it into Latin, and appears in classical documents in association with the most distant northern areas then known. In the medieval era, Ultima Thule is occasionally mentioned in reference to Iceland, and sometimes to Greenland, and may have been applied even to the Shetlands, the Orkneys and, probably, the nearby Faroes. Northern and on the edge, that’s Ultima Thule.

“MU69 is humanity’s next Ultima Thule. Our spacecraft is heading beyond the limits of the known worlds, to what will be this mission’s next achievement. Since this will be the farthest exploration of any object in space in history, I like to call our flyby target Ultima, for short, symbolizing this ultimate exploration by NASA and our team.”

Hence the beauty of space exploration. On Earth we eventually reach our Ultima Thule, whichever place we want to assign the name, whereas in space there’s always the next one. And indeed, New Horizons may get the chance to go after another Kuiper Belt Object after MU69. Future explorations will always find more distant targets in the cosmos. 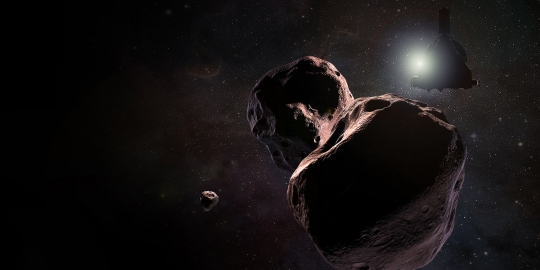 Now 6 billion kilometers from Earth, New Horizons has exited hibernation as of 0212 EDT (0612 UTC) on June 5, with all systems in normal operation. We’re now in the process of uploading commands to the computers aboard the spacecraft to begin preparations for the Ultima Thule flyby, including science retrieval and subsystem and science instrument checkouts. Things are heating up — we’re not that far from August, when New Horizons will begin making observations of its target, imagery that will provide information about any needed trajectory adjustments.

But back to that hibernation, which this time around lasted 165 days. New Horizons is now fully ‘awake’ and will remain so until late 2020, when all data from the Ultima Thule encounter should have been sent back to Earth. Hibernation itself was an ingenious innovation that would maximize efficiency by reducing the cost of mission control staffing. After all, a sleeping bird requires only a skeleton crew to maintain basic communications during this period.

The sheer ingenuity of the New Horizons design comes across here. No other NASA mission has attempted hibernation, but the experience of missions like Voyager demonstrated how useful it could be. Voyager required about 450 people to run flight operations, according to David Grinspoon and Alan Stern in Chasing New Horizons. Contrast that with a New Horizons flight staff of fewer than 50 people.

The numbers are striking when you look at how the project team changed after launch as well. In the four years before New Horizons’ 2006 departure, more than 2500 people were involved in building, testing and launching the spacecraft. They included those working on the Radioisotope Thermoelectric Generator (RTG) that converts radioactive decay into electricity, the ground systems necessary to monitor the mission, and of course the rocket that would launch it.

Within a month after launch, all that had changed. “The big city that was New Horizons was reduced to a small town,” write Grinspoon and Stern. As the book memorably states:

During the long years of flight to Pluto, only a skeleton crew of flight controllers and planners, a handful of engineering ‘systems leads,’ the two dozen members of the science team, their instrument engineering staffs, and a small management gaggle was needed. Alan [Stern] recalls, “Just weeks after launch nearly everyone went their own way, and the project was reduced to a little crowd of about fifty belly buttons. All of a sudden I looked around and it hit me: there are just a few of us — a tiny team — and we’re the entire crew that’s going to fly this thing for a decade and 3 billion miles and plan the flyby of a new planet.” 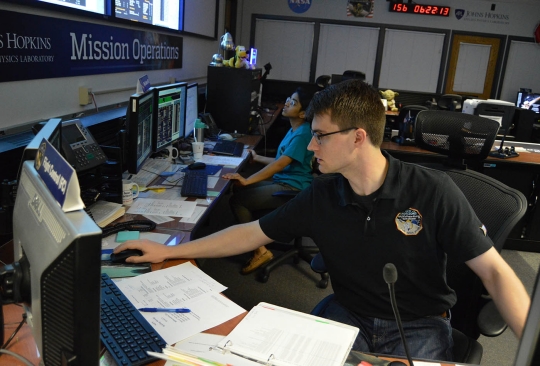 When New Horizons reached Pluto, 9.5 years had passed since launch, but because of hibernation, most of the craft’s primary systems only had 3.5 years of operational time clocked against them, which means the spacecraft was, for all intents and purposes, years younger than it would otherwise have been. Early hibernation periods tested out the concept not long after launch, easing into a process that soon increased hibernation periods to months at a time.

As New Horizons left its last hibernation period before the Pluto/Charon flyby, Alan Stern chose a ‘wake-up song’ for the occasion, a tradition dating back to Gemini 6 when flight controllers played ‘Hello Dolly’ to wake up astronauts Wally Schirra and Thomas Stafford. Stern chose ‘Faith of the Heart,’ a theme from the TV series Star Trek: Enterprise, with its lyric “It’s been a long road, getting from there to here.” Little did the team know at the time that the ‘heart’ of the title would be echoed by a famous feature on the surface of Pluto itself.

If you haven’t read Chasing New Horizons (Picador, 2018), I can’t recommend it strongly enough. This is the best inside account of a space mission I’ve yet read. Tomorrow I want to dig a little deeper into the book and talk about the New Horizons mission in context as we now begin the exciting process of preparing the craft for yet another encounter.