Protoplanets: The Next Detection Frontier

Some 4 million years old, the star HD 163296 is about 330 light years out in the direction of the constellation Sagittarius. When dealing with stars this young, astronomers have had success with data from the Atacama Large Millimeter/submillimeter Array (ALMA), teasing out features in protoplanetary disks filled with gas and dust, the breeding ground of new planets. As seen below, the ALMA imagery can be striking, a closeup look at a stellar system in formation. 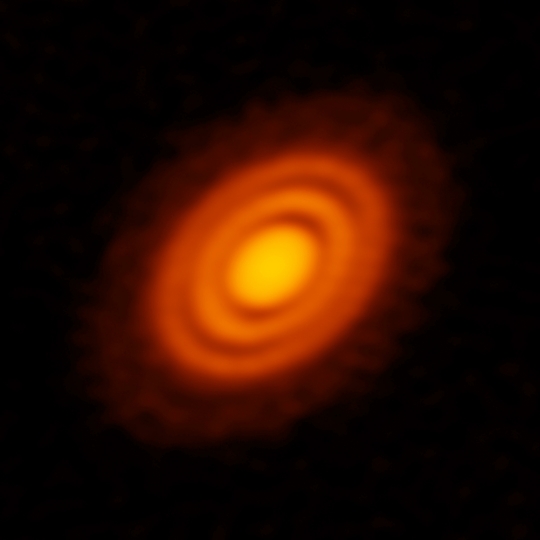 Tantalizingly, ALMA can show us rings in such disks, and the gaps that imply an emerging planet. But how do we know we’re actually looking at planets, rather than other phenomena we’re only now learning how to detect in such disks? New work from Richard Teague (University of Michigan) as well as a second effort by Christophe Pinte and team (Monash University, Australia) points us strongly toward the protoplanet interpretation. Both papers are in process at Astrophysical Journal Letters and available as preprints (see below).

In each case, the focus is not on the dust that is so visible in the image above but the distribution of carbon monoxide (CO) gas throughout the HD 163296 disk structure. ALMA is able to detect the millimeter-wavelength light that molecules of CO emit, while wavelength changes owing to the Doppler effect make it possible to discern the movement of the gas within the disk. Calling the precision involved in these studies ‘mind boggling,’ Teague coauthor Til Birnstiel (University Observatory of Munich) notes that in a system where gas rotates at about 5 kilometers per second, ALMA detected velocity changes as small as a few meters per second.

“Although dust plays an important role in planet formation and provides invaluable information, gas accounts for 99 percent of a protoplanetary disks’ mass,” says Teague coauthor Jaehan Bae of the Carnegie Institute for Science. “It is therefore crucial to study kinematics of the gas.”

Teague and team found disruption in the Keplerian rotation that gas would be expected to show, the orderly motion of objects around a central star. The emergence of localized disturbances within the gas would provide evidence for a planet in the making. And indeed, the researchers found two distinct patterns, one at roughly 80 AU, the other at 140 AU. Meanwhile, the team led by Christophe Pinte — likewise looking at anomalies in the flow of gas through detection of CO emissions rather than dust — detected a third planet-like pattern, this one at 260 AU. All three worlds, the scientists calculate, would be approximately similar in mass to Jupiter. 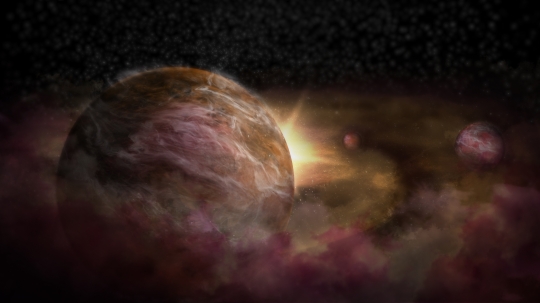 We’re out on the edge here, just as exoplanet hunting itself was in the early 1990s as we approached the first detections. These days we can use radial velocity, transits and gravitational microlensing to spot planets, with the number of confirmed worlds rising steadily. Protoplanets are another story altogether, although the evidence for them continues to mount. The Teague paper explains the significance of the CO studies:

We have presented a new method which enables the direct measurement of the gas pressure profile. This allows for significantly tighter, and more accurate, constraints on the gas surface density profile than traditional methods. Furthermore, as this method is sensitive to the gap profile, it provides essential information about the gap width in the gas which is typically poorly constrained from brightness profiles.

And indeed, what the work gives us is a way to measure changes in the gas velocity and density that correlate to the observed perturbations in the protoplanetary disk. Pinte’s team, meanwhile, working with measurements of CO velocity in the disk, found a 15 percent deviation from expected Keplerian flow. The possible protoplanet they detect at approximately 260 AU could conceivably be detected via direct imaging. If it is, the question of its formation is interesting:

Can massive planets form at a distance of 250 au from the star? The location of giant planets in the outer regions of discs would be broadly consistent with gravitational instability. On the other hand, the timescale for core accretion may also be reasonable given that HD 163296 is a relatively old disc (≈ 5 Myr). The planet may also have undergone outward migration, depending upon the initial profile of the disc. It is beyond the scope of this Letter to speculate further.

Measuring the velocity of carbon monoxide in a protoplanetary disk is an indication of how fine-grained the ALMA data on HD 163296 are. The comparison of these observations with computer models show a fit with the patterns that would be expected for young planets. The evidence is not yet conclusive, but it’s clear that the developing science of protoplanet detection is gaining traction. Applying these methods to other well-defined disks should tell us more.