On Those Ceres Organics

I set off an interesting conversation with a neighbor when organic material was detected on Ceres, as announced last year by scientists using data from the ongoing Dawn mission. To many people, ‘organics’ is a word synonymous with ‘life,’ which isn’t the case, and straightening that matter out involved explaining that organics are carbon-based compounds that life can build on. But organic molecules can also emerge from completely non-biological processes.

So with that caveat in mind about this word, it’s still interesting that organics appear on Ceres, especially since water ice is common there, and we know of water’s key role in living systems. A new paper looks again at data from Dawn, whose detections were made with infrared spectroscopy using its Visible and Infrared (VIR) Spectrometer. The instrument, examining which wavelengths are reflected off Ceres’ surface and which are absorbed, detected organic molecules in the region dominated by Ernutet Crater on Ceres’ northern hemisphere. 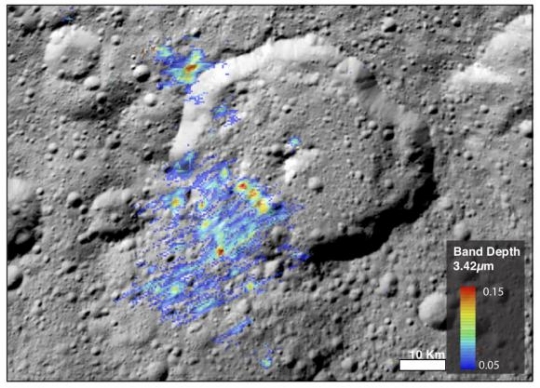 The paper’s lead author is Hannah Kaplan, now a postdoc at the Southwest Research Institute. What Kaplan and team did was to contrast the Dawn data with laboratory spectra from both terrestrial and extraterrestrial organic materials, the latter derived from meteorites. Comparing these materials with known composition, the researchers looked anew at the Ceres spectra to gain a better picture of their composition and abundance. This analysis could help us make the call on the origin of these organics, whether natural to Ceres or delivered by an impactor.

When they contrasted the VIR data from Ceres with the laboratory reflectance spectra of organic materials formed on Earth, the scientists found that between 6 and 10 percent of the spectral signature on Ceres could be explained by organic material. But folding in comparisons with organic material from carbonaceous chondrite meteorites, the team found a spectral reflectance that differed from the terrestrial.

“What we find is that if we model the Ceres data using extraterrestrial organics, which may be a more appropriate analog than those found on Earth, then we need a lot more organic matter on Ceres to explain the strength of the spectral absorption that we see there,” Kaplan said. “We estimate that as much as 40 to 50 percent of the spectral signal we see on Ceres is explained by organics. That’s a huge difference compared to the six to 10 percent previously reported based on terrestrial organic compounds.”

As to the question of origins, the impact theory would seem to favor a cometary solution, comets being known to display higher abundances of organics than asteroids. The accompanying problem here is that a cometary impact would produce enough heat to destroy such organics. On the other hand, formation on Ceres itself is problematic, because other than the small patches in the northern hemisphere region already noted, organics do not appear.

“If the organics are made on Ceres, then you likely still need a mechanism to concentrate it in these specific locations or at least to preserve it in these spots,” said Ralph Milliken, an associate professor in Brown University’s Department of Earth, Environmental and Planetary Sciences and a study co-author. “It’s not clear what that mechanism might be. Ceres is clearly a fascinating object, and understanding the story and origin of organics in these spots and elsewhere on Ceres will likely require future missions that can analyze or return samples.”

Thus a major lesson: The results depend on what kind of organic material you use to make sense of the Ceres data. The comparison with extraterrestrial organics seems sensible, and it’s one we’ll doubtless invoke again as we move toward upcoming asteroid encounters. It’s worth noting in that regard that Kaplan has recently joined the teaming operating OSIRIS-REx. The spacecraft will arrive at asteroid Bennu in August of this year, while the Japanese Hayabusa 2 is expected to reach asteroid Ryugu in a matter of weeks.

The paper is Kaplan et al., “New Constraints on the Abundance and Composition of Organic Matter on Ceres,” Geophysical Research Letters 21 May 2018 (abstract).