The Importance of an Eclipsing Charon

The quality of the image below isn’t very high, but consider what we’re looking at. This is the ‘night side’ of Pluto’s moon Charon as viewed against a star field by the New Horizons spacecraft. We’re looking at reflected light from Pluto –’Plutoshine’ — as the sole illumination of most of the surface. Who would have thought, in the 88 years since Clyde Tombaugh’s discovery of Pluto, that we would see a Plutonian moon’s dark side by Pluto’s light? 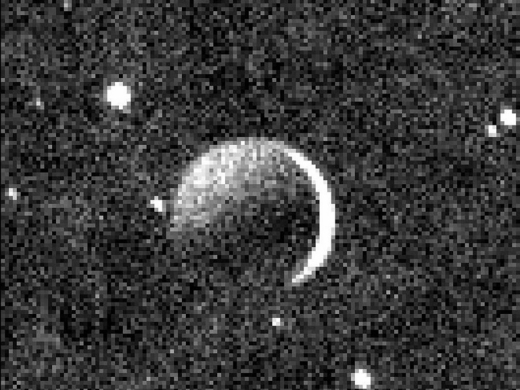 I wonder if there would have been a mission to Pluto at all if it hadn’t been for James Christy. Working with astronomer Robert Harrington at the U.S. Naval Observatory Flagstaff Station (Arizona), Christy was situated just miles away from Lowell Observatory, where Pluto was discovered, when he noticed a strange elongation in images of the world. That was forty years ago, on June 22, 1978, during an effort to tighten up estimates of Pluto’s orbit around the Sun. 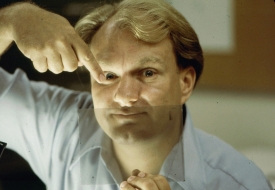 I suppose an astronomical analogue to this odd ‘blob’ on Christy’s plates would be the elongation Galileo puzzled over when he looked at Saturn with his earliest optics. In both cases, it would take a bit of imagination and better viewing to make out the real cause, which in Christy’s case was the moon that would be called Charon. It was Christy who proposed the name, and it stuck because the ferryman who carried souls across the river Acheron fit right in with the Plutonian milieu. Acheron was one of five rivers in mythical Pluto’s underworld.

A careful scientist, Christy compared other images to note that the ‘bump’ on Pluto seemed to move from one side to another. Bear in mind that it had been almost a half century since the discovery of Pluto, and in that time no moon had been found. Finding still more images showing an ‘elongated’ Pluto, Christy and Harrington worked out orbital parameters of a moon that could explain what they were seeing, and subjected them to yet more data via a confirmation by the Naval Observatory’s 61-inch telescope. The discovery was announced on July 7, 1978.

And the personal note: We’re told that Christy first chose the name because its first four letters matched the name of his wife, Charlene, known as ‘Char’ to her friends..”A lot of husbands promise their wives the moon,” Charlene Christy would later say, “but Jim actually delivered.” 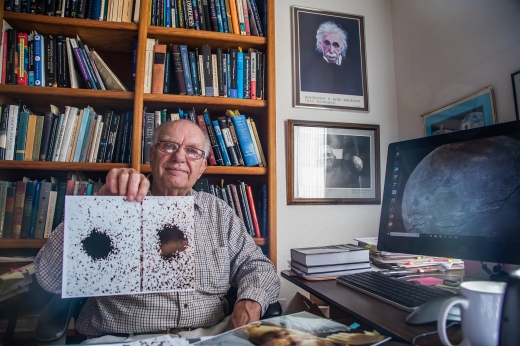 What a fine tribute that the New Horizons science operations center at JHU/APL, dedicated in 2002, is named after Christy. For the discovery of Charon marked a huge step in getting New Horizons bumped along the difficult terrain of mission approval and launch. Charon is aligned to make eclipses of Pluto possible (for a period of several years) just twice every 248 year Plutonian orbit of the Sun. The eclipses would start in 1985, allowing good science to flow.

In the pantheon of strange and lucky coincidences, the fact that Charon was discovered just before it was about to swing into place for this mutual event season — after all, another such set of eclipses wouldn’t occur for more than a century — is right up there with the grand-tour alignment of the planets appearing just when humans were ready to take advantage of it by mastering spaceflight.

Suddenly a six-year observing window was opening, one that would put Pluto at the top of every major scientific conference, and given the trials of getting New Horizons flown, it’s more than likely that without this string of events, the mission would never have been built. As it is, those of us who were startled to read about Christy’s discovery years ago now have the opportunity to look at images like the one below, showing what we saw then and what we see now. 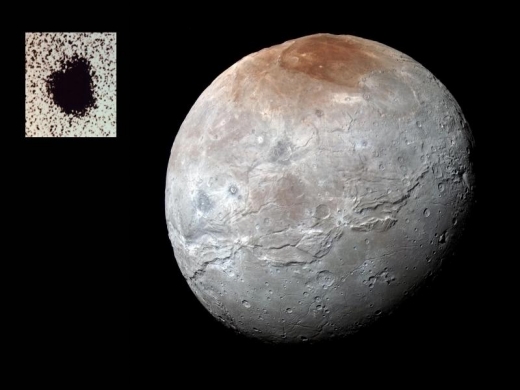 Image: What a difference 40 years makes. An enhanced color image of Charon from data gathered by the New Horizons spacecraft in 2015 shows a range of diverse surface features, significantly transforming our view of a moon discovered in 1978 as a “bump” on Pluto (inset) in a set of grainy telescope images. Credit: U.S. Naval Observatory; NASA/Johns Hopkins University Applied Physics Laboratory/Southwest Research Institute.

The Charon image that follows shows the fractures and canyons of Charon’s Pluto-facing hemisphere, a belt that stretches fully 1600 kilometers across the face of the moon and most likely onto the far side. Stark evidence of geological upheaval. the terrain is four times as long as the Grand Canyon and in places twice as deep, as this JHU/APL news release points out. New Horizons deputy project manager Cathy Olkin (SwRI) sees this tectonic belt as evidence that Charon once had a subsurface ocean whose eventual freezing cracked the surface. 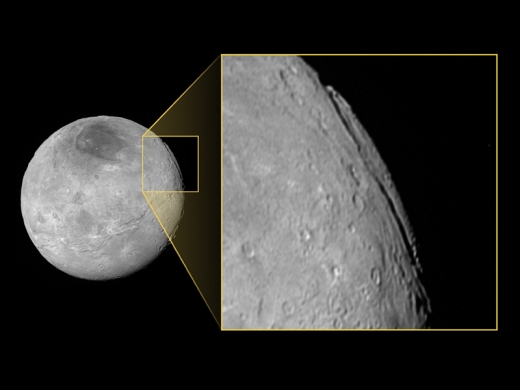 Image: This great canyon system stretches more than 1,600 kilometers across the entire face of Charon and likely around onto Charon’s far side. Four times as long as the Grand Canyon, and twice as deep in places, these faults and canyons indicate a titanic geological upheaval in Charon’s past. Credit: JHU/APL.

So this post is all about who we were 40 years ago and who we are now, what we knew back then and how dogged persistence and extraordinary coincidence could propel us to today’s stunning views of Charon. “When you go from this little blur in which you don’t actually see anything, to the enormous detail New Horizons sent back,” says Christy, “it’s incredible.”

Next post: Exoplanet Hunt: Speeding Up the Data Pipeline