The K2 mission’s C16 and C17 observing campaigns — each containing observations of one patch of the sky for an 80-day period — have proven fruitful for astronomers at MIT. The institution’s Ian Crossfield, working with graduate student Liang Yu, has brought new software tools developed at MIT to work, producing results just weeks after the mission’s raw data for these observing runs were made available. Now we have nearly 80 new exoplanet candidates from C16, but we also have a method of fast analysis that should benefit future missions.

Let’s pause on method. The idea here is to speed up the analysis of light curves, the graphs showing the intensity of light from a star. Between them, C16 and C17 tracked about 50,000 stars, the analysis of whose light would normally take at least several months and perhaps as long as a year. Speed is of the essence because a faster planet identification process makes it possible for quick ground-based radial velocity follow-ups that might otherwise prove challenging.

The reason: K2’s position in a trailing orbit as Earth moves around the Sun means that, depending on its orientation, some stars are not observable by scientists on the ground until the Earth returns to the same patch of sky. So-called ‘rear-facing’ campaigns, as this MIT news release points out, have little need for fast data analysis because the follow-up cannot happen for almost a year. But C16 and C17, in ‘forward facing mode,’ examined stars that remained within Earth’s field of view for several more months. The confirmation process could begin. 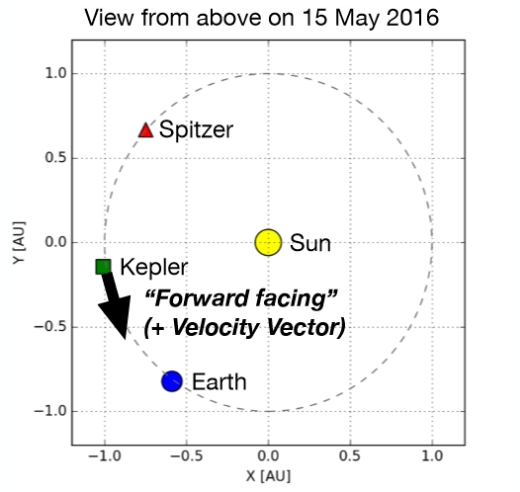 Image: The Kepler Space Telescope, now operating in its K2 extended mission, diagrammed here in ‘forward-facing mode.’ “Forward-facing” implies looking towards Earth in the spacecraft’s orbit, in the direction of the spacecraft’s velocity vector. Credit: This is a slide from a talk by Geert Barentsen and Tom Barclay for the 20th Microlensing Workshop in Paris in 2016.

The researchers’ goal, then, was to work through the light curves, which had been released on February 28, to let their algorithms narrow the field. In the case of C16, which is discussed in a paper on this work in The Astronomical Journal, that means paring 20,647 targets down to 1,097 stars of particular interest. The paper presents a catalog of interesting C16 targets identified through photometry, candidates for rapid identification and follow-up. 30 high-quality planet candidates emerged from the process, along with 48 lower-quality candidates, 164 eclipsing binaries, and 231 other periodically-variable astrophysical sources.

One find stands out as particularly interesting, a planet around the star HD 73344 that orbits its primary every 15 days. HD 73344 is a high proper-motion F6 star, its planet (if confirmed) orbiting the brightest planet host K2 has yet discovered. Crossfield and Yu’s data point to a planet of 2.5 Earth radii and 10 Earth masses circling its star every 15 days — Crossfield refers to it as “a smaller, hotter version of Uranus or Neptune.” At 114 light years from Earth, HD 73344 b could be a prime candidate for atmospheric composition studies.

The paper argues that fast planet searches should be of value for TESS (Transiting Exoplanet Survey Satellite), which will study nearby stars in 30-day periods, ultimately covering 85% of the sky. The data trove from this mission should be enormous, and as it is received, there will be a period of months before the stars examined during that month set for the year. Says Crossfield:

“If we get candidates out quickly to the community, everyone can start immediately observing systems discovered by TESS, and doing a lot of great planetary science. So this [analysis] was really a dress rehearsal for TESS.”

And this is from the paper:

The release of planet catalogs has occurred only irregularly during the K2 mission, but this paradigm will change once TESS operations begin in earnest. Data from TESS will be released and processed on a 27-day rhythm for most of the two-year mission duration. With the shorter observing windows, ephemeris decay is also a much larger problem for TESS and therefore the importance of securing planet candidates in the same season is even higher. If interesting objects could be rapidly gleaned from TESS data and circulated to the community, follow-up observations and analyses could begin a full season earlier and so the full impact of that mission could more quickly be achieved.

As to TESS itself, it’s hard to believe we’re already 68 days past the launch, a period in which the spacecraft has been undergoing commissioning operations before beginning the collection of scientific data.

.@NASA_TESS Mission Update: #TESS continues to operate in its science orbit that was reached in May. In one of the last passes, TESS performed a "break dance:" rotating around to evaluate any stray light sources to characterize camera performance for the duration of the mission.