It’s always a shock for me when the soft air and fecund smells of spring slam into a parched and baked July, but seasonal change is inevitable. At least it is on Earth. We get such seasonal changes because of Earth’s obliquity, the angle of its spin axis relative to the plane of its orbit. For Earth, the angle has stayed pretty close to 23 degrees for a long time, although the tilt’s direction wobbles over cycles of thousands of years. And this very constancy of obliquity turns up in exoplanet discussions at times because it affects conditions on a planetary surface.

Some have argued that without the gravitational effects of the Moon, the tilt of the Earth would be changed by the gravitational pull of the Sun and planets, producing a potentially high degree of obliquity. Contrast our situation with that of Uranus, where we find a 90-degree tilt that leaves one pole in sunlight for half the Uranian year as the other remains in darkness. Without knowing how long the Moon has been able to stabilize Earth’s axial tilt, we can’t say how apparent equatorial ice sheets some 800 million years ago fit into this view of the Moon’s effect.

But obliquity as a factor in habitability continues to energize exoplanetary researchers. At Georgia Tech, a team led by Gongjie Li, working with graduate student Yutong Shan (Harvard-Smithsonian Center for Astrophysics) has developed computer simulations to analyze the spin axis dynamics of two exoplanets, Kepler 186f and Kepler 62f, two planets considered to be in or close to the habitable zone of their stars. The paper argues that without our Moon, Earth’s obliquity variation would range from 0 to 45 degrees over billion-year timescales.

Thus obliquity is an interesting data point. Bear in mind that so far, we have no reliable values for exoplanet obliquity, although ways to infer it from light curves and from high-contrast direct imaging have been proposed in the literature. The authors make the assumption that in both exoplanet systems studied, all planets have been identified. They then go on to study the evolution of the two five-planet systems. The ‘secular analytical framework’ they arrive at allows them to factor in planetary rotation rates, additional planets and satellites, and regions where resonant interactions within the system can produce large obliquity variations. For various realizations of planetary systems, the paper thus describes an ‘obliquity evolution.’

We know that Mars and Earth interact strongly with each other, as do Mercury and Venus; other than Earth, none of these worlds has a large moon. The authors point out that the orientation angle of a planet’s orbit around its host star can be made to oscillate through gravitational interactions. If the orbit oscillates at the same pace as the precession of the planet’s spin axis, large obliquity variations can be induced, the kind of thing our Moon dampens out. 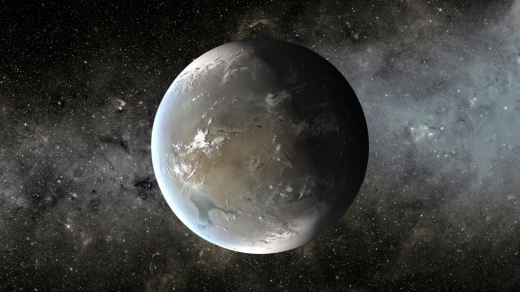 For these two exoplanet systems, we get an interesting result, for even without a stabilizing moon (if none is present), these two planets could be experiencing relatively low changes in their axial tilt:

“It appears that both exoplanets are very different from Mars and the Earth because they have a weaker connection with their sibling planets,” said Li. “We don’t know whether they possess moons, but our calculations show that even without satellites, the spin axes of Kepler-186f and 62f would have remained constant over tens of millions of years. That’s not to say either exoplanet has water, let alone life. But both are relatively good candidates. Our study is among the first to investigate climate stability of exoplanets and adds to the growing understanding of these potentially habitable nearby worlds.”

As Li has just pointed out, we have no knowledge of surface conditions on either of these planets, making the lovely image above nothing more than a guess, and an optimistic one at that. The ‘super Earth’ Kepler 62f, about 40 percent larger and with a mass 2.8 times that of our planet, is in the constellation of Lyra, the outermost of the five planets orbiting a K2-class star some 1200 light years from Earth. Kepler-186f orbits a red dwarf about 550 light years out, part of a five-planet system in the constellation Cygnus. A stable axial tilt would make it likely that both worlds experience regular seasons and thus a stable climate.

But are large obliquity values necessarily inimical to life? Some recent work, considered by the authors, shows that variability in obliquity can keep a planet’s global temperature higher than it would otherwise have been, extending the outer edge of the habitable zone. But it does appear that obliquity variations can produce sharp transitions between climate states. From the paper:

Recently, Kilic et al. (2017) mapped out the various equilibrium climate states reached by an Earth-like planet as a function of stellar irradiance and obliquity. They find that, in this parameter space, the state boundaries (e.g. between cryo- and aqua-planets) are sharp and very sensitive to the climate history of the planet. This suggests that a variable obliquity can easily move the planet across state divisions, as well as alter the boundaries themselves, which would translate into a dramatic impact on instantaneous surface conditions and long-term climate evolution.

Planets with highly irregular seasons aren’t necessarily destined to be lifeless, but if we become capable of determining planetary obliquity, such a value could help us narrow the target list for future space telescopes. The authors also suggest that their framework can provide input parameters for existing global climate models as we analyze habitability in multi-planet systems.

Next post: Uranus: Orbital Tilt from a Cataclysmic Collision