Yesterday’s post about exoplanet obliquity inevitably brought our own system to mind, with the stark variations between planets like Earth (23 degrees), Uranus (98 degrees) and Mercury (0.03 degrees) serving as stark examples of how wide the variation can be. Thus seasonality has to be seen in context, and interesting questions arise about the effect of high degrees of obliquity on habitability. While thinking about that I received a new paper on Uranus that has bearing on the matter, with its attempt to quantify the ‘hit’ Uranus must once have taken.

After all, something accounts for the fact that the 7th planet spins on its side, its axis at right angles to those of the other planets, its major moons all orbiting in the same plane. Lead author Jacob Kegerreis (Durham University), working with Luis Teodoro (BAERI/NASA Ames) and colleagues modeled 50 different impact simulations in an attempt to recreate the axial tilt of this world. In play were the planet’s internal structure, rotation rate, atmospheric retention post-impact and the composition of materials injected into orbit by the event. Says Kegerreis:

“Our findings confirm that the most likely outcome was that the young Uranus was involved in a cataclysmic collision with an object twice the mass of Earth, if not larger, knocking it on to its side and setting in process the events that helped create the planet we see today.” 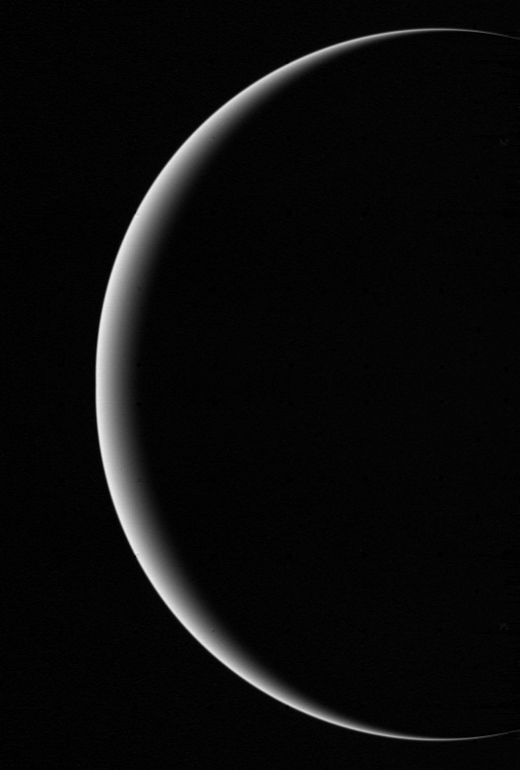 Image: This image shows a crescent Uranus, a view that Earthlings never witnessed until Voyager 2 flew near and then beyond Uranus on January 24, 1986. This planet’s natural blue-green color is due to the absorption of redder wavelengths in the atmosphere by traces of methane gas. Uranus’ diameter is roughly 51,000 kilometers, a little over four times that of Earth. Image credit: NASA/JPL/USGS.

The likely impactor was a young protoplanet, striking Uranus during the early era of Solar System formation some 4 billion years ago. That in itself is not surprising, though it’s good that the idea can be firmed up with high-resolution modeling. But we also learn something else. Debris from the impactor may have formed a thin shell near the top of Uranus’ ice layer. This could have the effect of trapping the heat emanating from the planet’s core, a useful finding because it helps to explain the extreme cold of the upper atmosphere (-216 degrees C).

Those temperatures are a puzzle that is exacerbated by the fact that we know so little about the interior of Uranus. The paper points out that surface emission is in equilibrium with solar insolation, which implies that little heat flows out from the planet, and this is in striking contrast with the other giant planets. Thus the idea of a thin thermal boundary layer between the outer envelope of hydrogen and helium and the inner ice-rich layer. The shell theory fits earlier work on the planet’s evolution, and also gives us some ideas about the type of impact.

Looking at where the mass and energy of the impactor are deposited within the planet, the paper focuses on the top of the ice layer, and suggests the impact was a grazing one:

Higher impact parameters can even lead to a temperature inversion near the top of the ice layer. These more-grazing collisions also leave the impactor ice further out, in a thin shell near the edge of the icy mantle, whereas ∼head-on impacts can implant significant ice up to 0.5 R⊕ further inwards and less-isotropically about the centre. These findings may have important implications for understanding the current heat flow (or rather lack thereof) from Uranus’ interior to its surface.

Thus we have a thermal boundary that can, as the paper argues, suppress convection, a kind of blanket to contain heat welling up from within the planet. We can also dig deeper into the planet’s magnetic field. Unlike the terrestrial planets, the Uranian magnetic field appears offset by approximately 0.3 Uranus radii from the center of the planet and tilted by 60 degrees relative to the rotation axis. Other work in the literature has described models that produce such fields using a layer of convecting electrically conducting ices. The impactor modeled in this work could have created lopsided clumps of rock within the planet that explain the offset and tilt.

An impactor of 2 Earth masses blows rock and ice into orbit, where it is available for the formation of Uranus’ current satellites and ring system, giving us constraints on the angular momentum delivered by the collision. All of which is a reminder of how violent a place a young stellar system can be during the era of planet formation, information which should prove useful as we extend what we are learning about our own ice giants to worlds around other stars.