It’s startling to think that the Dawn spacecraft, now orbiting Ceres at its lowest altitude ever, may have fired its ion engine for the last time. The event occurred by way of positioning the spacecraft for the best possible track near Cerealia Facula, which is a prominent deposit of sodium carbonate in the center of the crater called Occator. Data from the spacecraft’s visible and infrared imaging spectrometer had been used to identify the bright areas called faculae as calcium carbonate deposits earlier in the mission. Vinalia Faculae is in the same area.

“Acquiring these spectacular pictures has been one of the greatest challenges in Dawn’s extraordinary extraterrestrial expedition, and the results are better than we had ever hoped,” said Dawn’s chief engineer and project manager, Marc Rayman, of NASA’s Jet Propulsion Laboratory, Pasadena, California. “Dawn is like a master artist, adding rich details to the otherworldly beauty in its intimate portrait of Ceres.” 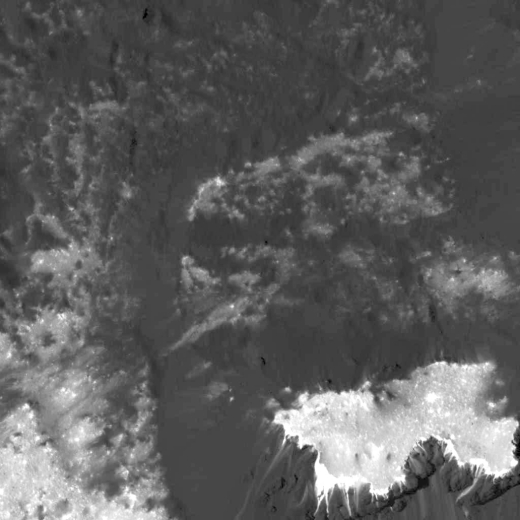 Image: A prominent mound located on the western side of Cerealia Facula, in an image obtained by NASA’s Dawn spacecraft on June 22, 2018 from an altitude of about 34 kilometers. Credit: NASA/JPL-Caltech/UCLA/MPS/DLR/IDA.

You’ll recall the intriguing bright material that began showing up during Dawn’s approach to Ceres, the investigation of which has been a major theme for mission controllers. Imagine if we had a Pluto orbiter to rival what Dawn is doing at Ceres, with the opportunity to map the entire surface, and to delve deeply into the unusual geology on display there. In the case of Ceres, we can now say that the mound above, located at about 19.5 degrees north latitude and 239.2 degrees east longitude, is similar, in JPL’s words, to ‘a mesa or large butte with a flat top.’ Image: In this image of the northern rim of Occator crater landslides can be seen. The image was obtained by NASA’s Dawn spacecraft on 16 June, 2018 from a distance of approximately 33 kilometers. Credit: NASA/JPL-Caltech/UCLA/MPS/DLR/IDA.

Researchers have concluded that the dome at the center of Occator is the source of saline solutions that evaporated, leaving the bright deposits identified early in the mission (for further background, see this MPS news release). Here and elsewhere in the crater, we are probably seeing vents that allow a mixture of water and salt to rise from a deeper brine reservoir. The new imagery gives us the best differentiation yet between the bright sodium carbonate and the dark background material, allowing us to probe still further the origin of the faculae.

“The data exceed all our expectations,” says framing camera lead investigator Andreas Nathues (Max Planck Institute for Solar System Research, Germany). “We now hope to understand how the bright deposits outside the crater center came about – and what they tell us about Ceres’ interior.”

Bear in mind as well that new gravity measurements may likewise provide details about the subsurface of the dwarf planet. As with New Horizons, analysis of the data trove will take years as the imagery continues to pour in. The faculae of Ceres are the largest deposit of carbonates ever found outside Earth and possibly Mars, leading to the question of how this material was exposed. This JPL news release notes as major possibilities a shallow, subsurface reservoir of mineral-rich water, or a deeper source of brines percolating upward through fractures. Image: This close-up image of the Vinalia Faculae in Occator Crater was obtained by NASA’s Dawn spacecraft on June 14, 2018 from an altitude of about 39 kilometers. This image reveals the intricate pattern between bright and dark material across this flow feature. The complex structure of the dark background is reminiscent of lava flows observed on Earth. However, in the case of Ceres, the flow material likely involved a lot of ice. The bright material is mostly composed of sodium carbonate, a salt whose exposure onto the crater floor involved a liquid source. The center of this picture is located at about 21.0 degrees north latitude and 241.3 degrees east longitude. Credit: NASA/JPL-Caltech/UCLA/MPS/DLR/IDA.

Next post: The Apkallu Initiative: A Minilithic Artefact for Rebooting Human Civilization in the Event of Global Cataclysm