Something happens when we start making maps of hitherto unknown terrain. A sense of familiarity begins to settle in, a pre- and post-visit linearity, even when the landscape is billions of miles away. To put a name on a place and put that name on a map is a focusing that turns a bleary imagined place into a surface of mountains and valleys, a place that from now on will carry a human perspective. It can’t be undone; a kind of wave function has already collapsed.

And what place more remote than Pluto? At the dwarf planet’s Tenzing Montes, we find striking peaks, some of them running up to 6 kilometers in height, and all this on a world that, until 2015, we weren’t sure even had mountains. Certainly we weren’t expecting mountains this tall, or a terrain this rugged. Given how many years may pass before we have another chance to visit Pluto/Charon, these first official validated topographic maps of the dwarf planet and its moon, just released, will carry our science — and our imaginations — for a long time to come. 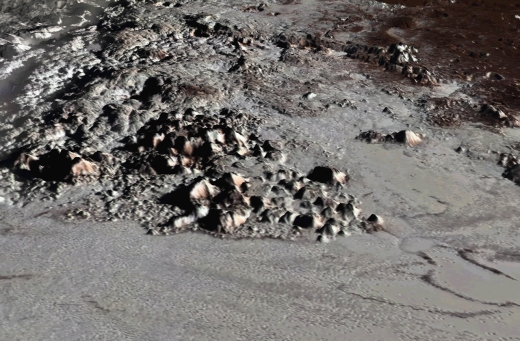 Image: Perspective view of Pluto’s highest mountains, Tenzing Montes, along the western margins of Sputnik Planitia, which rise 3-6 kilometers above the smooth nitrogen-ice plains in the foreground. The mounded area behind the mountains at upper left is the Wright Mons edifice interpreted to be a volcanic feature composed of ices. Area shown is approximately 500 kilometers across. Image credit: Lunar and Planetary Institute/Paul Schenk.

The maps are the work of New Horizons researchers led by Paul Schenk (Lunar and Planetary Institute). The team examined all the images from New Horizons’ Long Range Reconnaissance Imager (LORRI) and Multispectral Visible Imaging Camera (MVIC) systems as the raw material for their mosaics. They aligned surface images where they overlapped and performed digital analysis of stereo images both cameras acquired, producing topographic maps for each region, then assembling these into integrated topographical charts for both Pluto and Charon.

Pluto’s mountains are likely made of water ice, because ices from volatiles like methane and nitrogen would not be strong enough to support such tall features, and as the images show, the steep peaks along the southwestern edge of Sputnik Planitia, itself a frozen sheet of nitrogen, have slopes pushing 40° or more. The topographical maps put large-scale features into perspective and help us see both Pluto’s and Charon’s surfaces in a broader context.

Sputnik Planitia is a good example. Fully 1000 kilometers wide, it contains an ice sheet that averages 2.5 kilometers below Pluto’s mean elevation, which corresponds to sea level on our own planet. The maps also show us that the outer edges of the sheet are an even deeper 3.5 kilometers below mean elevation. These are the lowest known areas on Pluto, a fact that emerges only through study of the stereo images and subsequent elevation maps they spawned. The deep ridge-and-trough system running north to south near the western edge of Sputnik Planitia is more than 3000 kilometers long, evidence for extensive fracturing, as this LPI news release explains. It is the longest known feature on the dwarf planet.

And then there’s Charon. Who would have dreamed in 1978, when astronomer James Christy discovered it, that we would ever have the kind of detail that shows below?

Image: Perspective view of mountain ridges and volcanic plains on Pluto’s large moon Charon. The ridges reach heights of 4 to 5 kilometers above the local surface and are formed when the icy outer crust of Charon fractured into large blocks. The smoother plains to the right are resurfaced by icy flows, possibly composed of ammonia-hydrate lavas that were extruded onto the surface when the older block sank into the interior. Area shown is approximately 250 kilometers across. Image credit: Lunar and Planetary Institute/Paul Schenk.

In my first paragraph today, I summoned quantum mechanics for inspiration, saying that producing maps created the collapse of a kind of psychological wave function. Adam Alter made the same point a few years back in an article in The New Yorker, where he talked about our association of linguistic labels with the things they denote. The effects can be subtle. Northerly movement, for example, is associated in psychological testing with going uphill, apparently a remnant of the decision of ancient Greek mapmakers to put the northern hemisphere above the southern one.

Alter goes on to speak of what he calls a ‘linguistic Heisenberg principle,” meaning that as soon as you label a concept, you change how people perceive it, and I would assume this goes for landscapes as well. So we’d better choose the place names we put on our maps with care, given the freight they carry in our imaginations. Ray Bradbury knew this as well. His ‘The Naming of Names’ takes Earth colonists on Mars to strange places indeed as they begin to name the places they see.

For in the world of The Martian Chronicles, Mars is a place with a long, long history, and pretty soon the new place names the colonists have chosen begin to morph back into their ancient forms, as spoken by the original inhabitants of the planet. Before long not just the names but the people themselves are changing, returning to existences ancient, rich and strange:

The nights were full of wind that blew down the empty moonlit sea-meadows past the little white chess cities lying for their twelve-thousandth year in the shallows. In the Earthmen’s settlement, the Bittering house shook with a feeling of change.

Lying abed, Mr.Bittering felt his bones shifted, shaped, melted like gold. His wife, lying beside him, was dark from many sunny afternoons. Dark she was, and golden, burnt almost black by the sun, sleeping, and the children metallic in their beds, and the wind roaring forlorn and changing through the old peach trees, violet grass, shaking out green rose petals.

It’s a great tale, and one worth re-reading any time mapping new landscapes comes to mind.

Next post: Ross 128b: Analyzing a Planet by the Light of its Star

Previous post: TVIW Symposium on The Power of Synergy