A cluster of stars sharing a common origin, now gravitationally unbound, is referred to as a stellar association. I’ve written before about how useful some of these groupings can be. In the form of so-called moving groups — a stellar association that is still somewhat coherent — they help us identify stars of similar age, an aid as we discover new objects. Now we have word of an object called 2MASS 0249 c, found in the Beta Pictoris moving group, that has striking similarities to the most famous member of that group, Beta Pictoris b.

2MASS 0249 c, like Beta Pictoris b, was found by direct imaging, meaning we’re actually looking at the object under discussion in the image below. The two objects are all but identical in mass, brightness and spectrum. Images from the Canada-France-Hawaii Telescope (CFHT) showed an object moving at a large distance from its host, which turned out to be a pair of closely spaced brown dwarfs.

Follow-up observations with the Keck instrument allowed that determination, while spectroscopy at the NASA Infrared Telescope Facility and the Astrophysical Research Consortium 3.5-meter Telescope at Apache Point Telescope completed the data.

“To date, exoplanets found by direct imaging have basically been individuals, each distinct from the other in their appearance and age. Finding two exoplanets with almost identical appearances and yet having formed so differently opens a new window for understanding these objects,” said Michael Liu, astronomer at the University of Hawai`i Institute for Astronomy, and a collaborator on this work. 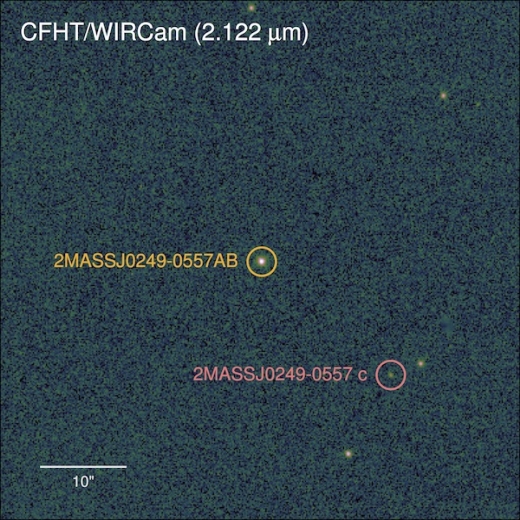 Image: Image of the 2MASS 0249 system taken with Canada-France-Hawaii Telescope’s infrared camera WIRCam. 2MASS 0249 c is located 2000 astronomical units from its host brown dwarfs, which are unresolved in this image. The area of sky covered by this image is approximately one thousandth the area of the full moon. Credits: T. Dupuy, M. Liu.

The difference in formation scenarios that Liu talks about is instructive. Here we have two host stars, one of them being a binary system of brown dwarfs, that formed in the same stellar nursery, as per their membership in the moving group. But while Beta Pictoris b, a gas giant of about 13 Jupiter masses, orbits a star 10 times brighter than the Sun, 2MASS 0249 c orbits a brown dwarf pair 2000 times fainter. At a distance of 9 AU, Beta Pictoris b is relatively close to its star, while 2MASS 0249 c is a whopping 2000 AU from its brown dwarf hosts.

These distances imply different formation scenarios. Beta Pictoris b likely formed from the accumulation of dust grains in the circumstellar disk surrounding its star. 2MASS 0249 c could not have done so, given that the two brown dwarfs it orbits would not have had sufficient disk material to produce it. That implies the new planet took form through the gravitational collapse of a gas cloud found in the original stellar birth cluster.

“2MASS 0249 c and beta Pictoris b show us that nature has more than one way to make very similar looking exoplanets,” says Kaitlin Kratter, astronomer at the University of Arizona and a collaborator on this work. “They’re both considered exoplanets, but 2MASS 0249 c illustrates that such a simple classification can obscure a complicated reality.” 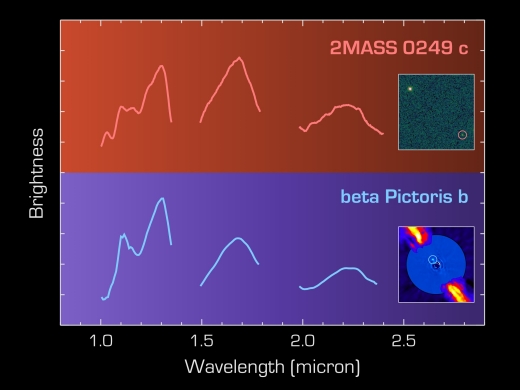 Image: The infrared spectra of 2MASS 0249 c (top) and beta Pictoris b (bottom) are similar, as expected for two objects of comparable mass that formed in the same stellar nursery. Unlike 2MASS 0249 c, beta Pictoris b orbits much closer to its massive host star and is embedded in a bright circumstellar disk. Credit: T. Dupuy, ESO/A.-M. Lagrange et al.

What we get out of all this is opportunity. The formation of gas giants is a key phase in the emergence of new planetary systems, and being able to use direct imaging to study such worlds means we can probe their atmospheres directly, examining the composition, surface temperature, chemistry and other physical properties of the exoplanet. Moreover, direct imaging is most effective when working with planets far from their star, as this object is. If we are after insights into gas giant formation, the different formation pathways for Beta Pictoris b and 2MASS 0249 c may provide evidence both orbital and spectral. The paper notes:

As directly imaged objects, β Pic b and 2MASS J0249−0557 c provide a new opportunity to test atmospheric compositions and angular momentum evolution for a close-in planet and a very wide companion that share a common mass and age and that formed from the same material.

And on the issue of spectra:

If different formation mechanisms produced these objects, then their spectra could contain evidence of their divergent pasts. As noted above, we suspect that 2MASS J0249−0557 c arose from a star-formation-like process of global, top-down gravitational collapse in the same way as the freefloating object 2MASS J2208+2921. On the other hand, β Pic b bears architectural resemblance to planetary systems and thus may have formed via core accretion. Core accretion models and observations of solar system gas giants show substantial metal enrichment (e.g., Stevenson 1982; Bolton et al. 2017). Thus, if β Pic b is a scaled-up gas giant (≈13 MJup), then we may expect to see substantial metal enrichment in its atmosphere.

What an interesting find 2MASS 0249c turns out to be. Is it a planet or actually a brown dwarf? One thing is for sure: The discovery puts a spotlight on the boundary between planet and brown dwarf, both in terms of composition and in terms of formation history. Maybe it’s best to fall back on how today’s paper describes the object: a ‘planetary-mass companion.’ Now we can go to work, via direct imaging, on issues like variability, rotation and atmospheric composition. How these data vary across different formation histories should occupy astronomers for some time.