With my time-out period over (more about this next week), I want to get back into gear with the help of Ramses Ramirez, a specialist on planetary habitability whose work has now taken him to Japan. Born and raised in New York City, Ramses tells me he is much at home in his new position as a research scientist at the Earth-Life Science Institute (ELSI) in Tokyo, where opportunities for scientific collaboration abound and the chance to learn a new language beckons. We’ve looked at Ramses’ papers a number of times in these pages, and I was delighted when he offered this description of his work to our readership. A student of James Kasting, he received his Ph.D. from Penn State in 2014 and went on to postdoc work with Lisa Kaltenegger at Cornell’s Carl Sagan Institute. A fascination with astrobiology and the issues involved in defining habitable zones continues to be a primary focus. Ramses’ new paper ponders whether we are best served by looking for life similar to Earth’s because this is what we know, or whether there is a broader strategy, one that probes all the assumptions in our ideas of the classical habitable zone. 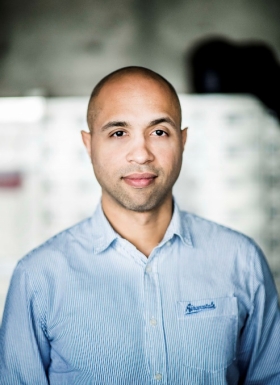 I am glad to have the opportunity to formally introduce myself and give a summary of the recent work on planetary habitability and the habitable zone. I define the habitable zone (HZ) as the circular region around a star(s) where standing bodies of liquid water could exist on the surface of a rocky planet [1]. The inclusion of the phrase “standing bodies of water” excludes dry worlds that may exhibit small outpourings of seasonal surface water (e.g. possibly Mars). Defined this way, the HZ is properly focused for detecting worlds that have large surface bodies of water (e.g. seas, big lakes, oceans) that are in direct contact with the atmosphere. If life is present on such a world, potential atmospheric biosignatures could be detected with current technology. However, in the absence of such large water bodies, life would not be detectable even if it were present. Likewise, although life may be possible within the seas of a Europa or Enceladus exoplanetary analogue, the global ice layer covering their oceans would prevent the detection of such subsurface life. Such observational issues keep the HZ within an orbital region that is placed somewhat closer to the star.

When I first started my Ph.D. in 2010 under my mentor Professor James F. Kasting, I did not know the exact topic that I would be working on at first, but with my interest in the search for extraterrestrial life, I knew that I wanted to work on planetary habitability. Fortunately, I got involved as one of the two lead authors on the 2013 HZ paper [2], where we updated the seminal Kasting et al. [3] HZ limits [2,3]. Although I was fascinated by the HZ concept as a navigational tool to find potentially habitable planets, my investigations soon led me to realize that the HZ definition described in these earlier works, what I dub the “classical HZ”, would be insufficient for capturing the diversity of such planets. From that point on, it became my personal mission to turn the HZ into an even more capable navigational tool.

The classical HZ assumes that CO2 and H2O are the key greenhouse gases on potentially habitable planets, following the carbonate-silicate cycle on the Earth, which is thought to regulate CO2 between the atmosphere, surface, and the interior (e.g. [3]). Given that the concept of a universal carbonate-silicate cycle on habitable exoplanets is itself far from proven (e.g., [4]), I always thought that this assumption was needlessly restrictive and geocentric. After all, HZ planets with atmospheres consisting of different gas mixtures can also support standing bodies of liquid water and potentially be habitable. Reduced greenhouse gases, like H2 and CH4, have been considered as major atmospheric constituents on both early Earth and early Mars (e.g., [5,6]). It has even been suggested that planets with primordial hydrogen envelopes may be habitable in some circumstances [7]. If hypothetical planets consisting of dense 10-bar CO2 atmospheres near the outer edge of the classical HZ are potentially habitable (e.g. [2][3]), then why not worlds composed of these other atmospheric constituents (Figure 1)? 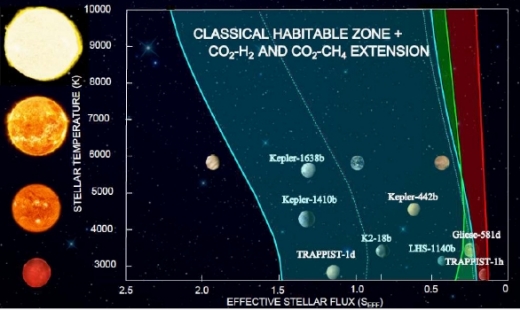 Figure 1: The classical HZ extended to A-stars (blue) with CO2-CH4 (green) and CO2-H2 (red) outer edge extensions for stars of stellar effective temperatures between 2,600 and 10,000 K (reproduced from Ramirez [1]).

Moreover, the classical HZ really targets potentially habitable planets orbiting main-sequence stars. However, this approach ignores the importance of the temporal evolution of the HZ, particularly a star’s pre-main-sequence phase. It is during this early stage that many M-stars are bright and luminous enough to completely desiccate any planets that are now thought to be located within the main-sequence HZ (e.g. [8][9][10]), like Proxima Centauri-b and many of the TRAPPIST-1 planets, unless such worlds are able to accrete enough water to offset losses (e.g., [11][12]) (Figure 2). 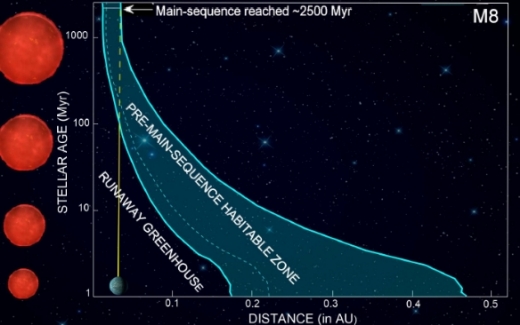 Figure 2: The pre-main-sequence HZ for a late (M8) star. A planet that forms at ~0.03 AU undergoes a runaway greenhouse state for ~100 Myr before finally entering the HZ, settling near the outer edge after ~1 billion years (reproduced from Ramirez [1]).

In my view, we are currently ill-equipped to infer the atmospheric conditions that are most suitable for extraterrestrial life. All we know is that life did somehow arise on this planet. It is therefore pretentious to take our one poorly-understood example and assume that alien life must follow a similar trajectory. Some might argue that we should focus on finding life similar to Earth’s because it is familiar and would be simpler to find. However, this argument from the principle of mediocrity is not convincing to me because we have no idea how common or rare our particular brand of life is until we are able to find a second instance of life’s occurrence elsewhere.

It is then illogical to rely on any one iteration of the HZ to find potentially habitable planets. Our inadequate understanding of biology, the origin of life, and planetary processes require that all of these working hypotheses, including the assumptions used in the classical HZ, be tested by observations. Ideas that are later found to be unsupported by nature can then be rejected whereas those that are confirmed should be refined. Only then will we begin to truly understand life’s possibilities and make more informed – and possibly more restrictive – design decisions for subsequent missions. But only proper observations (and possibly better theoretical constraints) can tell us this, and not adherence to some ambiguous and untested geocentric philosophy. Finding extraterrestrial life will be one of the hardest endeavors undertaken by our species. To meet the challenge, we need to start with a thorough and openminded search for potentially habitable planets.

Thus, as some Centauri Dreams readers may already know, part of my work (in collaboration with Lisa Kaltenegger) in recent years has focused on improving our understanding of both the spatial [13][14] and temporal evolution of the HZ [8][15]. These papers have already been discussed in previous Centauri Dreams posts. However, in addition to our own work, other researchers and colleagues have also proposed their own revisions and extensions to different aspects of the HZ, further increasing its utility as a tool for finding life that is both similar and dissimilar to Earth’s. This gradual but steady evolution in how we think about the HZ has come to a good point (I believe) for a review paper to come along such as this one.

I hope that your readers will like my new summary of recent advances (linked below) in our understanding of the HZ. I see this work as both a primer for the student and layman as well as a guide for space missions. It includes many recommendations and suggestions for how the classical HZ, in conjunction with newer HZ formulations, can be used to maximize our chances of finding extraterrestrial life. For example, I do not think that a proper assessment of planetary habitability can be made without properly assessing a planet’s pre-main-sequence habitability. A-stars should also be considered as potential hosts for life-bearing planets. Most importantly, we should employ the various HZ formulations and rubrics to rank which planets are most likely to host life. Finally, my paper clarifies many common misconceptions about the HZ concept and explains why the search must necessarily be limited to finding surface liquid water (at least for now).

The review paper is “A more comprehensive habitable zone for finding life on other planets,” published in Geosciences 8(8), 280 (28 July 2018). Full text available here. [PG: Expect a close look at this paper in coming weeks on Centauri Dreams].