On to Ultima Thule

I am now back on the job, and somewhere beyond Pluto seems a good place to go. Somehow it seems safer out there. While vacationing here on Earth, I was bitten by a brown recluse spider, spent two weeks with a swollen and painful foot, and came down with the most intense flu-like symptoms I’ve ever experienced. The final indignity: I received my monthly report on Centauri Dreams reader statistics. Since I had done no posting for a large portion of this report, I was curious to find out how much traffic had slowed in my absence. It turned out that traffic increased right after I stopped posting and stayed robust the entire time.

I am trying to figure out what this means…

But back to New Horizons, putting my tumultuous vacation experience behind me. Anyone who remembers how hard it was to find a suitable Kuiper Belt Object to serve as New Horizons’ next target will understand how challenging it would be to observe MU69 from the ground. The distant object, perhaps a binary, must be made to yield as many of its secrets as possible as our spacecraft continues the journey that will culminate in a New Year’s Day 2019 flyby. The effort proceeds by the observation of stellar occultations by hardworking mobile teams. 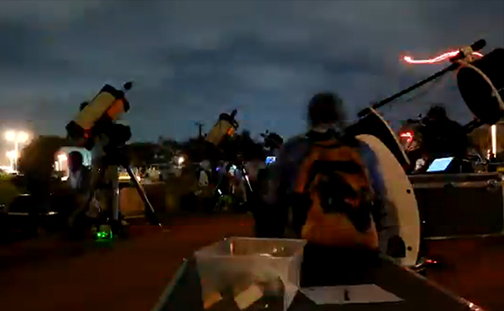 What good news, then, to hear from the New Horizons scientists that the latest effort to catch MU69 (recently dubbed ‘Ultima Thule’) passing in front of a much more distant star has been successful. An earlier effort took scientists to Argentina and South Africa in June of last year, while in July of 2017 the NASA Stratospheric Observatory for Infrared Astronomy (SOFIA) probed the area around the object for debris that could pose a collision hazard to the spacecraft. The Hubble instrument also examined the region that same month.

But it’s the ground-based effort that fascinates me. Because when I think of eclipses, I think about large bodies like the Moon passing in front of the Sun, or Earth’s shadow darkening the Moon. Yet the New Horizons effort is likewise the attempt to track an eclipse, one so demanding that it takes pinpoint geographical precision and sheer luck to pull in the data. The strips of shadow cast by MU69 were no more than 30 kilometers wide, with the teams’ telescopes placed at multiple points to catch the moment when the KBO passed in front of the star. Almost 50 researchers made the trip to Senegal and Colombia for the event.

The earlier occultations yielded measurements indicating that MU69 is an ‘extreme prolate spheroid,’ meaning an object shaped something like an American football. A close binary or even a ‘contact’ binary can’t be ruled out, with two objects actually touching each other. 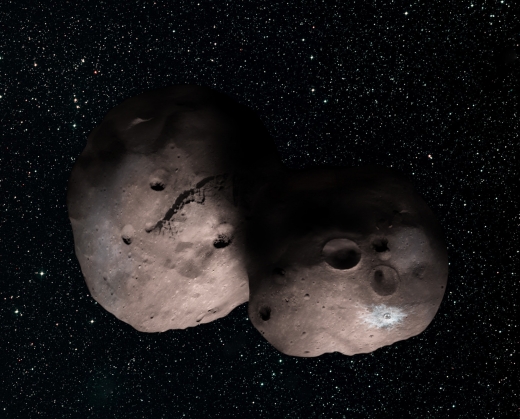 Image: This is one artist’s concept of Kuiper Belt object 2014 MU69, the next flyby target for NASA’s New Horizons mission. This binary concept is based on telescope observations made at Patagonia, Argentina, on July 17, 2017, when MU69 passed in front of a star. New Horizons scientists theorize that it could be a single body with a large chunk taken out of it, or two bodies that are close together or even touching. Credit: NASA/Johns Hopkins University Applied Physics Laboratory/Southwest Research Institute/Alex Parker.

We now turn toward weeks of analysis of the data gathered in Senegal and Colombia on August 3-4. Weather was an issue in the new work just as it was at the team’s multiple sites in Patagonia in 2017.

“Gathering occultation data is an incredibly difficult task,” said New Horizons occultation event leader Marc Buie of the Southwest Research Institute, Boulder, Colorado, who also discovered Ultima Thule about a year before New Horizons flew past Pluto in July 2015. “We are literally at the limit of what we can detect with Hubble and the amount of computer processing needed to resolve the data is staggering.” 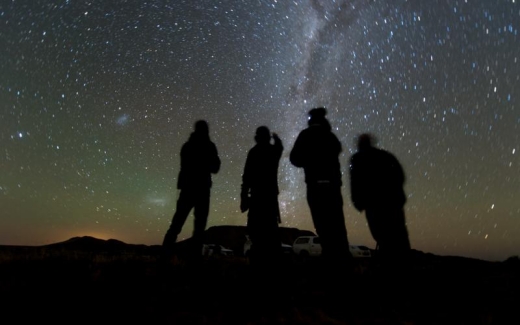 Image: A photo from the previous occultations. Four members of the observation team scan the sky while waiting for the start of the 2014 MU69 occultation, early on the morning of June 3, 2017. The target field was in the Milky Way, seen here from their observation site in the Karoo desert near Vosburg, South Africa. They used portable telescopes in an attempt to observe MU69, a small Kuiper Belt object (now nicknamed Ultima Thule) and the next flyby target the New Horizons spacecraft, pass in front of a star. New Horizons team members made similar observations of Ultima this week in Senegal. Credit: NASA/Johns Hopkins Applied Physics Laboratory/Southwest Research Institute/Southwest Research Institute/Henry Throop.

The spacecraft itself continues to receive commands from Earth in preparation for the Ultima Thule flyby, including memory updates, as subsystem and science instruments are checked out. In September, New Horizons will begin to make observations of the target, which will once again help to refine the spacecraft’s course for the flyby. The distance between spacecraft and KBO for the event is now planned to be 3,500 kilometers. When it occurs, at 6.5 billion kilometers from Earth, tiny Ultima Thule will become the most distant object ever explored.