Just how important is plate tectonics for the development of complex life? We’ve learned that its continual churn, with material pushing up from ocean rifts and being subducted as it meets continental shelves, can moderate the Earth’s climate. Increasing temperatures are tamped down through the capture of excess carbon dioxide in rocks, which reduces potential greenhouse conditions. Lowering temperatures will produce the reverse effect. The result is a mechanism for maintaining stable temperatures that some have seen as necessary for life.

“Volcanism releases gases into the atmosphere, and then through weathering, carbon dioxide is pulled from the atmosphere and sequestered into surface rocks and sediment,” said Bradford Foley, assistant professor of geosciences at Penn State University. “Balancing those two processes keeps carbon dioxide at a certain level in the atmosphere, which is really important for whether the climate stays temperate and suitable for life.”

And indeed, most of the volcanoes on our planet are found on the border between tectonic plates. Here, too, plates being driven deeper into the subsurface through subduction push carbon deep into the mantle as the cycle continues. But we also know that the Earth is the only planet in the Solar System on which plate tectonics has been confirmed. Planets without such plates are known as stagnant lid planets, coping with a crust made up of a single spherical plate floating on the mantle. Should we rule out such planets as candidates for life?

Penn State’s Foley, cited above, has been working with colleague Andrew Smye on computer models that probe the idea. The scientists wanted to learn whether climate regulation through chemical weathering could be sustained on a stagnant lid planet,a place where there is no subduction and the recycling of surface material back into the mantle would be limited. On such a world, the development of continents and their productive collisions would not occur, although as the paper points out, volcanism can still release some mantle CO2 to the atmosphere, allowing for at least some degree of surface recycling through lava flows.

Foley and Smye’s simulations are restricted to planets that are Earth-like in size and composition, given the steep uncertainties in our knowledge of volcanism and outgassing on planets with different mantle compositions. Their work models conditions on Earth-like stagnant lid planets in terms of weathering, CO2 outgassing, and changing heat retention in the crust. The question is whether chemical weathering can balance the CO2 being released on such worlds, and whether there is enough outgassing to keep the surface from freezing over. And we learn that ruling out life on stagnant lid planets would be premature.

For given volcanic outgassing in the right amounts and a suitable planetary composition, clement conditions on the surface can be produced and sustained, all without plate tectonics:

Models of the thermal, magmatic, and degassing history of rocky planets with Earth-like size and composition demonstrate that a carbon cycle capable of regulating atmospheric CO2 content, and stabilizing climate to temperate surface temperatures, can potentially operate on geological timescales on planets in the stagnant lid regime. Plate tectonics may not be required for habitability, at least in regard to sustaining a stable, temperate climate on a planet.

In fact, the authors find the potential for moderate climates that can last up to 5 billion years, after which volcanism and CO2 outgassing would cease and the climate would cool below the freezing point of water, inducing glaciation on the surface. Everything depends upon the planet’s supply of CO2, and that takes us back to its formation:

At CO2 budgets lower than ∼1020 mol, a planet’s climate is estimated to be in a snowball state for its entire history, while above ∼1022 mol weathering would become supply-limited. With supply-limited weathering, CO2 outgassing overwhelms CO2 drawdown, such that an inhospitably hot, CO2-rich atmosphere forms. Thus, the amount of carbon accreted to a planet during formation is critical for whether it can sustain habitable surface conditions in a stagnant lid regime.

The amount of carbon most conducive for habitable conditions turns out to be somewhere between Earth’s total amount of carbon to about 10 times less carbon than is found in today’s atmosphere, mantle and crust combined. Below that, the planet does not stay warm enough for liquid water to survive on the surface. 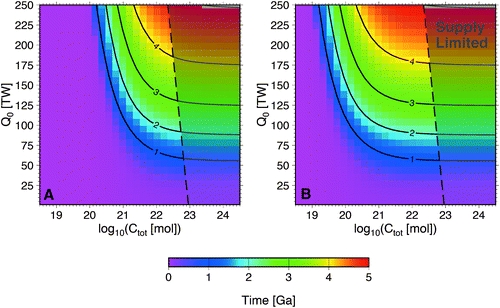 Thus carbon dioxide can still escape from rocks in a degassing process that takes it to the surface, a process that depends on the types and quantities of heat-producing elements found in the planet. The planet’s initial composition tells the tale. The work indicates that high internal heating rates favor long-term habitability, and points to young planets as more likely to experience sufficient rates of CO2 outgassing. In the hunt for biosignatures, the authors argue for planets orbiting stars with high thorium or uranium abundance, because these are the most likely to contain the necessary constituents to produce sufficient internal heat.