Given the spectacular interactions between Io and Jupiter — the moon plays a major role in shaping the planet’s magnetic field and contributes a cloud of particles originally produced by its volcanic activity — it’s all but inevitable that a recently discovered ‘rogue’ object would be compared to the duo. The rogue in question is SIMP J01365663+0933473, a planetary mass object of perhaps 12 Jupiter masses that is at the boundary between brown dwarf and planet. Between 12 and 13 Jupiter masses is considered to be the deuterium burning limit; i.e., above this, we would expect a gaseous object to be a deuterium-burning brown dwarf.

What an intriguing situation we find here. Originally found in data collected by the Very Large Array, SIMP J01365663+0933473 (which I’ll now mercifully shorten, as per the paper, to SIMP0136) has a magnetic field some 200 times stronger than Jupiter’s. The discovery marked the first radio detection of a possibly planetary mass object beyond our Solar System, as well as the first measurement of the magnetic field of such an object. SIMP0136 is presented as part of a broader study examining five known radio-emitting brown dwarfs observed at the VLA.

Some brown dwarfs have previously been found to have auroras, not dissimilar to those we’ve found in our own Solar System’s gas giant planets. But how they are produced here is an interesting question. The spectacular auroral displays that can enliven winter skies on Earth are the result of our planet’s magnetic field interacting with the solar wind. SIMP0136, 20 light years out, is unaccompanied by any star. Thus the Io comparison — we may be looking at an orbiting planet (or moon, depending on what the primary object is) interacting with its magnetic field. 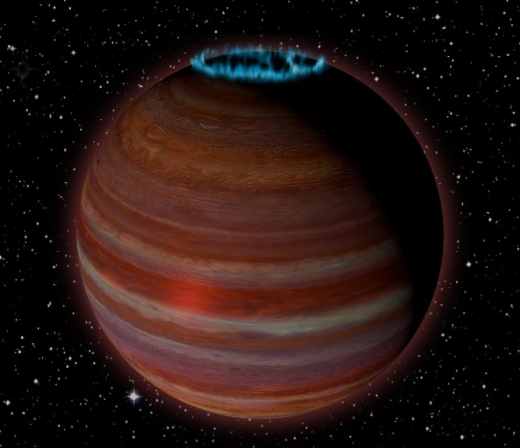 Image: Artist’s conception of SIMP J01365663+0933473, an object with 12.7 times the mass of Jupiter, but a magnetic field 200 times more powerful than Jupiter’s. This object is 20 light-years from Earth. Credit: Caltech/Chuck Carter; NRAO/AUI/NSF.

The lead author of today’s paper on this object is graduate student Melodie Kao, recently at Caltech, and now a postdoc at Arizona State University. Kao points out in this NRAO news release that SIMP0136 can help us understand magnetic processes on both stars and planets. Radio flaring was first observed in a brown dwarf in 2001, providing evidence for strong magnetic activity.

In fact, the original detection of SIMP0136 was as part of a study into brown dwarf magnetic fields and radio emission in cool objects, but SIMP0136 itself was then thought to be considerably older than it turns out to be. Last year an independent team headed by Jonathan Gagné discovered that it was part of the young Carina-Near moving group, and determined that its mass was 12.7 times that of Jupiter, with a radius 1.22 times that of the gas giant. All the brown dwarfs surveyed here turn out to be rapid rotators, with rotation periods between ∼1.44 and 2.88 hours. The authors suggest a rotation period of 2.3895±0.0005 for SIMP0136.

At 200 million years old (the projected age of the Carina-Near moving group), with a surface temperature of about 825 degrees Celsius (well below our Sun’s surface temperature of 5,500 degrees C), SIMP0136 looked more and more like a free-floating planet. It should be useful as we examine the production of magnetic fields in both brown dwarfs and exoplanets, along with the auroral activity they can generate. And here’s an interesting follow-up. Are we looking at a new way to detect a particular kind of exoplanet? From the paper:

…SIMP0136…was recently found to be a member of a nearby ∼200 Myr moving group. This new age constraint reduces its estimated mass to a mere 12.7 ± 1.0 MJ, possibly making SIMP0136 the first known planetary mass object detected in the radio. If SIMP0136 is indeed a field exoplanet, its detection demonstrates that auroral radio emission can open a new avenue to detecting exoplanets, including elusive rogue planets.