Speaking of getting really, really close to a star, as we were yesterday in our discussion of the Parker Solar Probe, I couldn’t help but turn to new computer models of the ‘ultrahot Jupiter’ WASP-121b. I still find it delightful that the earliest exoplanet detections involved a category of planet that few scientists had imagined existed. These days we routinely discuss gas giants blisteringly close to their hosts, and even manage to extract information about their atmospheres through transmission spectroscopy, but few people expected such planets when we began to discover them.

In fact, Apollo 11’s Buzz Aldrin had a role to play in what may be considered to be the first prediction of the worlds we would start calling ‘hot Jupiters.’ Working with John Barnes on his novel Encounter with Tiber (Grand Central, 1996), Aldrin asked physicist Greg Matloff whether a hydrogen-helium atmosphere as found in a Jupiter-class world could survive in an inner stellar system. Here’s how Matloff recalls the discussion:

Although I was initially very skeptical since then-standard models of solar system formation seemed to rule out such a possibility, I searched through the literature and located the appropriate equation (Jastrow and Rasool, 1965)….To my amazement, Buzz was correct. The planet’s atmosphere is stable for billions of years. Since I was at the time working as a consultant and adjunct professor, I did not challenge the existing physical paradigm by submitting my results to a mainstream journal. Since “Hot Jupiters” were discovered shortly before the novel was published, I am now credited with predicting the existence of such worlds.

Indeed, for this was just at the time when 51 Pegasi b swam into our consciousness in 1995 (the book was finished but not yet published when the discovery was made). Now we knew that hot Jupiters were out there, and the radial velocity method of exoplanet discovery ensured that large planets close to their star would be the most likely to be detected in our earliest efforts.

The Realm of the ‘Ultrahot’

But hot Jupiters are but one variety of inner system gas giants. Today we can catalog a planet like WASP-121b as a member of a still more unique class of worlds, distinguishing between ‘hot Jupiters’ and those gas giants that come astoundingly close to their stars.

Dubbed ‘ultrahot Jupiters,’ these worlds reflect about as much light as charcoal. What distinguishes them is a temperature that on the dayside causes them to glow like an ember. Thus the image below, in which WASP-121b is simulated based on computer models that draw on observations of the planet conducted by the Spitzer and Hubble space instruments. 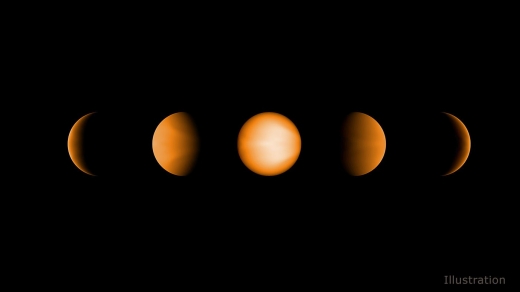 Image: These simulated views of the ultrahot Jupiter WASP-121b show what the planet might look like to the human eye from five different vantage points, illuminated to different degrees by its parent star. The images were created using a computer simulation being used to help scientists understand the atmospheres of these ultra-hot planets. Credit: NASA/JPL-Caltech/Aix-Marseille University (AMU).

The word ‘hellish,’ so often used to describe the surface of Venus, can with even more justice be applied to ultrahot worlds like this. They orbit closer to their host stars than Mercury does to the Sun, tidally locked and with temperatures that can range between 2,000 and 3,000 degrees Celsius. Even the nightside of such a world can reach 1,000 degrees Celsius, though as we’ll see, this makes enough of a difference to explain some anomalous observations.

For new work from Vivien Parmentier (Aix Marseille University, France) and colleagues goes into the question of why we find no water vapor in the atmospheres of these worlds. Hot Jupiters — gas giants in an inner system that experience dayside temperatures below 2,000 degrees Celsius — have been found with abundant water vapor in their atmospheres. But ultrahot Jupiters seem to lack it. One theory on why is that these planets formed with high levels of carbon instead of oxygen, but the new study points to the occasional traces of water that have been detected at the dayside-nightside boundary as a refutation of the idea.

Parmentier’s team, applying a model of brown dwarf atmospheres developed by co-author Mark Marley (NASA Ames), went to work on ultrahot Jupiter atmospheres as if they were the atmospheres of stars. After all, says Parmentier, “The daysides of these worlds are furnaces that look more like a stellar atmosphere than a planetary atmosphere. In this way, ultrahot Jupiters stretch out what we think planets should look like.”

The team used Spitzer observations of WASP-121b at infrared wavelengths to probe carbon monoxide levels in its atmosphere. CO molecules have a bond strong enough to withstand the dayside heat. The result: The planet’s atmosphere reveals a strong temperature gradient, burning hotter higher up than further down. A uniform atmosphere could have masked the signature of water molecules, providing one explanation for the apparent lack of water.

But the carbon monoxide work showed that the answer lies elsewhere. According to the study, hydrogen and oxygen atoms are indeed found on ultrahot Jupiters, but the strong irradiation on the dayside simply tears the water molecules apart. The researchers have placed WASP-121b in the context of recently published studies authored by Parmentier, co-author Michael Line (ASU) and others on fellow ultrahot Jupiters WASP-103b, WASP-18b and HAT-P-7b.

They have concluded that the fierce stellar winds of the dayside blow the broken water molecules onto the nightside, where they can recombine and condense into clouds before, inevitably, drifting back onto the dayside to undergo the destructive process again.

The paper sees the transmission spectrum of WASP-121b as being consistent with a solar composition atmosphere having partial cloud coverage. Within its dayside atmosphere, molecules are being continually sundered. And here is why we see no water:

Ultra hot Jupiters with dayside temperatures larger than 2200K are good targets for thermal emission measurements. However, the majority of the observed planets have weaker-than-expected spectral features in the 1−2µm range. Using the example of WASP-121b, we interpret this lack of strong features as being due to a combination of a vertical gradient in molecular abundances due to thermal dissociation, and to the presence of H− [the hydrogen anion, or negative ion of hydrogen] absorption at wavelengths shorter than 1.4µm.

Thermal dissociation affects all spectrally important molecules in the atmospheres of ultra hot Jupiters except CO. It creates a large vertical gradient in the molecular abundances. We show analytically that the presence of such a molecular gradient weakens the features in emission spectra. This is a qualitatively different effect than a global depletion of the abundances. 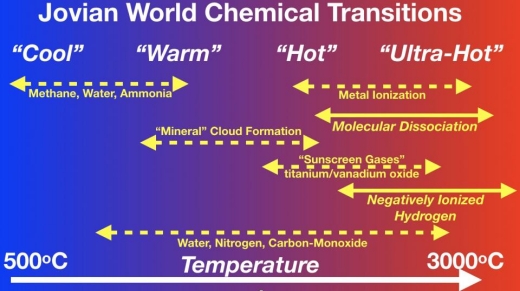 Image: Jupiter-like exoplanets are 99 percent molecular hydrogen and helium with smaller amounts of water and other molecules. But what their spectra show depends strongly on temperature. Warm-to-hot planets form clouds of minerals, while hotter planets make starlight-absorbing molecules of titanium oxide. Yet to understand ultrahot Jupiter spectra, the research team had to turn to processes more commonly found in stars. Credit: Michael Line/ASU.

What a place an ultrahot Jupiter must be. The idea of this kind of circulation in the atmosphere is given force by the previous detection by Hubble of clouds at the boundary between night and day. The same process may affect titanium oxide as well as aluminum oxide. Because the latter is the basis for the gemstone ruby, this JPL news release speculates that there could be clouds producing rains of liquid metals and fluidic rubies in the atmospheres of ultrahot Jupiters. That would make the ultrahot Jupiter about as exotic an environment as we can conceive.

The paper is Parmentier et al., “From thermal dissociation to condensation in the atmospheres of ultra hot Jupiters: WASP-121b in context.” submitted to Astronomy & Astrophysics (preprint).