On the Enigma of Arrival

The death of V.S. Naipaul (1932-2018), that cross-grained and all too combative man who saw so unflinchingly into the post-colonial lands from which he drew his heritage, invariably brings to mind his strangest novel, The Enigma of Arrival (Vintage Books, 1987). Temporarily settled into a cottage in Wiltshire in rural England, the author looks back on his career in search of a renewal as cyclic as the seasons. Landscape inspires creativity in this deeply visualized microcosm, even as Naipaul broods over the painting that gives the book its title.

The novel is an odd, self-indulgent work, one I completed more out of a sense of duty (I was reviewing it for a newspaper) than enthusiasm. Yet its introspective imagery keeps resonating. Naipaul was obsessed with the sub-story of the painting, showing the arrival of a visitor at a strange port city and implying a subsequent journey that would in some way parallel his own career.

The work of Giorgio de Chirico (1888-1978), ‘The Enigma of Arrival and the Afternoon’ is a canvas showing this surreal cityscape, a world fitting into Naipaul’s autobiographical meditation with its characters disembarked in a place suggestive of antiquity under a brooding Levantine sky.

A classical scene, Mediterranean, ancient-Roman — or so I saw it [writes Naipaul]. A wharf; in the background, beyond walls and gateways (like cutouts), there is the top of the mast of an antique vessel; on an otherwise deserted street in the foreground there are two figures, both muffled, one perhaps the person who has arrived, the other perhaps a native of the port. The scene is of desolation and mystery… 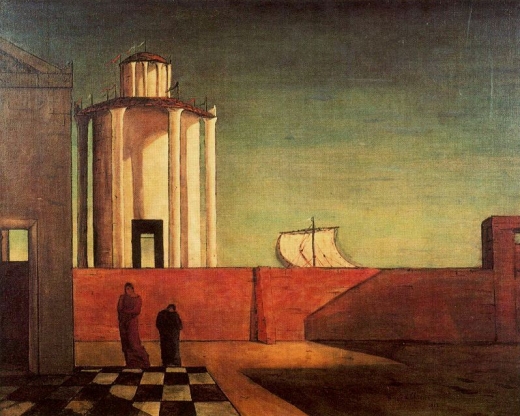 Which gets us to interstellar flight and other, more exotic arrivals. I’ve always believed that if we ever do discover hard evidence of an extraterrestrial civilization, that experience will not translate into trade opportunities or galactic encyclopedias but mysteries that leave us in some ways more baffled about the nature of intelligence than ever before. I draw a distinction here between ‘contact’ and ‘encounter,’ which are entirely different things, and wonder what this kind of arrival would look like to humans finding evidence for extraterrestrial intelligence.

Here I’ll invoke the splendid novel Roadside Picnic, by Arkady and Boris Strugatsky (1971). Alien artifacts appear at various places on Earth, so-called ‘zones of visitation’ filled with bizarre items, many of them dangerous, and inexplicable happenings. Unseen themselves, the aliens are glimpsed only through what they leave behind in our region of spacetime before moving on. Protagonist “Red” Schuhart is a ‘stalker,’ one who defies the danger to enter the alien zones in search of artifacts. What happens in a Zone can never be predicted.

He had never experienced anything like this before outside the Zone. And it had happened in the Zone only two or three times. It was as though he were in a different world. A million odors cascaded in on him at once—sharp, sweet, metallic, gentle, dangerous ones, as crude as cobblestones, as delicate and complex as watch mechanisms, as huge as a house and as tiny as a dust particle. The air became hard, it developed edges, surfaces, and corners, like space was filled with huge, stiff balloons, slippery pyramids, gigantic prickly crystals, and he had to push his way through it all, making his way in a dream through a junk store stuffed with ancient ugly furniture … It lasted a second. He opened his eyes, and everything was gone. It hadn’t been a different world—it was this world turning a new, unknown side to him. This side was revealed to him for a second and then disappeared, before he had time to figure it out.

Ursula Le Guin was quick to note the connection between the Strugatskys and the work of Stanislaw Lem, the great Polish novelist whose Solaris (1961) is widely admired and twice filmed. Here too, coping with a planet-wide ocean with its own kind of sentience, the human characters come up hard against their own preconceptions and the failure of their paradigms to understand an alien presence. Lem chided what he called ‘the myth of our cognitive universalism,’ a myth the Strugatsky’s equally exploit in the ravishingly strange Roadside Picnic. Like Naipaul, Lem has his own obsession with arrivals.

“We don’t want to conquer the cosmos, we simply want to extend the boundaries of Earth to the frontiers of the cosmos… We are searching for an ideal image of our own world: we go in quest of a planet, a civilization superior to our own but developed on the basis of a prototype of our primeval past. At the same time, there is something inside us which we don’t like to face up to, from which we try to protect ourselves, but which nevertheless remains, since we don’t leave Earth in a state of primal innocence. We arrive here as we are in reality, and when the page is turned and that reality is revealed to us – that part of our reality which we would prefer to pass over in silence – then we don’t like it anymore.”

Is an arrival always a wakening of self-knowledge? Here I might also mention Arthur C. Clarke’s Rendezvous with Rama (1973), in which an alien starship passes through the Solar System, an approach that reminded many Centauri Dreams readers of the recent appearance of ‘Oumuamua. A survey vessel despatched to study the object called Rama discovers geometric structures and a ‘cylindrical sea,’ along with an atmosphere that turns out to be breathable. But Rama will not tarry. After a gravitational slingshot maneuver, it departs the Solar System for the Magellanics.

It is an arrival wrapped in mystery but, as Clarke goes on, “at least we have answered one ancient question. We are not alone. The stars will never again be the same to us.”

Could anything ever be the same? In tales like these, we confront the unknowable in disturbing ways, conflicted by our inability to establish the kind of contact that would explain and enlarge our own existence. No one can know what an actual alien contact might involve, but I suspect that dealing with an entirely separate lifeform deriving from an evolution under wholly different skies will prove to be as enigmatic as anything written by the Strugatskys, Lem or Clarke.

In that vein, I recently ran across an essay by astrophysicist Ethan Siegel, sent on by several readers who knew how often we’ve discussed Breakthrough Starshot in these pages. What Siegel does is to reverse the story. He wonders how the recipients of an arrival from Earth would react, and speculates that if we’re not careful, we may send entirely the wrong signal.

Breakthrough Starshot, after all, envisions pushing a fleet of small sails carrying payloads of a gram or so to a nearby stellar system. Right now the obvious target is Proxima Centauri, where we know we have a planet in the habitable zone, but we may find equally promising possibilities around Centauri A or B. The goal here is not contact but simply the opportunity to perform flybys of an interesting planet and return data and imagery, and Siegel is quick to note that sails boosted to 20 percent of lightspeed have no deceleration mechanism available to them.

The problem: A ‘cone of uncertainty’ exists for any trajectory that will take us close enough to the planet to retrieve good data, an aiming problem requiring unprecedented levels of precision. Thus the possibility that we could be entering an inhabited stellar system and colliding with a living world cannot be ruled out. Siegel notes the invariable relationship between kinetic energy and speed: Double the speed and you get four times the energy. Even our tiny 1-gram spacecraft moving at 60,000 km/sec, says Siegel, will hit with the force of a 1 tonne asteroid moving at 60 km/sec, which in effect means we could cause a Chelyabinsk-like event, or more than one.

If you were an alien on this world that got struck by these relativistic masses, what would you conclude? You’d know that these were too massive and too fast-moving to be created naturally; they were made by an intelligent civilization. You’d know that you were being intentionally targeted; space is too vast for these to strike you by random chance. And — worst of all — you’d assume this civilization had a malicious intent. No benevolent aliens would launch something so recklessly and carelessly given the damage it would cause. If we’re smart enough to send a spacecraft across the galaxy to another star, surely we can be wise enough to reckon the disastrous consequences of doing so.

What an arrival this would be. And yet, in order to study nearby worlds, we have yet to come up with a plan remotely as feasible as the admittedly longshot Breakthrough Starshot. Are there ways we can minimize this risk or eliminate it altogether while still finding a way to begin interstellar explorations? Because we do need to consider how we are perceived when we probe into the utterly unknown, and if the odds seem long that there is a civilization on Proxima b or that we might inadvertently hit the planet we are studying, they are still not zero.

The enigma of arrival is magnified and transformed when we are arriving at a place we are seeing for the first time, just as our arrival at Pluto/Charon opened up two worlds while posing new mysteries about the surfaces we flew past. Naipaul referred to de Chirico’s scene as the depiction of ‘a dangerous classical city,’ one in which the newcomer sought orientation and meaning. How much more enigmatic might our own arrival be if perceived by other intelligences? Should the need for ‘exoplanetary protection’ join our other mission parameters?

[Addendum]: Be sure to look at Avi Loeb’s spirited response to Siegel in Why Humanity Probably Won’t Accidentally Start An Interstellar War With An Alien Civilization. More on this tomorrow.