When we think about what is usually called ‘planetary protection,’ we’re talking about the probes we send to possibly life-bearing places like Mars or Europa. It would confound our investigations if we couldn’t be sure we hadn’t contaminated such a place with microorganisms from Earth, unwittingly carried aboard a lander that was not properly stripped of such passengers. Even our Cassini Saturn orbiter was guided into the planet as a way of ensuring that it would not, at some future date, crash into a place as biologically interesting as Enceladus.

Yesterday, having looked at an essay by Ethan Siegel, I asked rhetorically whether we should think up some kind of exoplanetary protection policy as well. After all, we’re fleshing out an actual mission design through Breakthrough Starshot, aiming to reach nearby stars in coming decades. Siegel (Lewis & Clark College) had expressed his concern that Breakthrough Starshot might inadvertently start an interstellar war. The idea is extreme, but I use the word ‘war’ because it was right there in the title of Siegel’s piece.

What Siegel worries about is that among the large number of payloads Breakthrough Starshot would like to send to nearby stars there might be one that accidentally impacted the planet under study. He’s concerned about the ‘cone of uncertainty’ that would be involved in any trajectory aimed at making a close pass of a planet like Proxima b and argues that at 60,000 km/sec, which is the Starshot goal of 20 percent of c, a tiny 1-gram payload will strike with the force of a 1 tonne asteroid moving at 60 km/sec, a hit like Chelyabinsk.

Harvard’s Avi Loeb, who chairs the Breakthrough Starshot advisory board, finds little merit in the concern. I had been wondering as I wrote yesterday’s post just what Dr. Loeb would have to say about Siegel’s views, only to find an email with a link to his new essay in Forbes in my mailbox shortly after I published — his piece had already appeared that morning. Loeb points out that at a tenth of the speed of light, a payload of Starshot size would “…merely carry the energy of a common asteroid, only a few meters in size — of order the height of a person. Such asteroids hit the Earth a few times per year and burn up in the atmosphere.”

Here is a map of asteroid impacts that Loeb linked to in his essay. 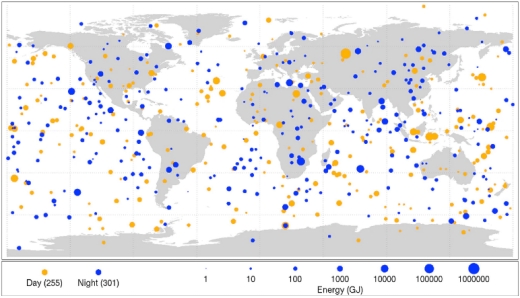 Image: This diagram maps the data gathered from 1994-2013 on small asteroids impacting Earth’s atmosphere to create very bright meteors, technically called “bolides” and commonly referred to as “fireballs”. Sizes of red dots (daytime impacts) and blue dots (nighttime impacts) are proportional to the optical radiated energy of impacts measured in billions of Joules (GJ) of energy, and show the location of impacts from objects about 1 meter (3 feet) to almost 20 meters (60 feet) in size. Credit: Planetary Science.

The map, the work of NASA’s Near Earth Object Program, is instructive. All told, 556 small asteroids impacted our atmosphere in a 20-year period, almost all of them disintegrating in the atmosphere, with the obvious exception of the Chelyabinsk event, which was caused by the largest asteroid to strike in this timeframe. My understanding about Chelyabinsk is that the meteor was approximately 20 meters in size, moving at roughly 19 kilometers per second.

But wouldn’t a one-gram payload moving at Starshot speeds still wreak havoc if it fell on a planetary surface? Evidently the event wouldn’t happen. Let me quote Loeb on this:

…a gram-scale starchip would burn up in the atmosphere of a planet much more easily than a tonne-mass asteroid. Its impact on a planet would be no more irritating than the impact of a dust grain on the skin of a grazing cow. The interplanetary medium is full of debris that poses far greater risks to a planet, as the dinosaurs realized when wiped out by the impact of a 10-15 kilometer asteroid (a trillion times more massive than we just considered) some sixty five million years ago.

In any case, Loeb sees the chances of collision at something less than one part in a million, given the fact that knowing the relative positions of planet and spacecraft over a journey lasting decades is impossible with the payload as envisioned. What Breakthrough Starshot does expect is a closest approach thousands of times larger than the surface of any planet.

We should pause on the deceleration question, which comes up repeatedly whenever I talk about Starshot probes with people new to the project. While it is certainly true that deceleration and orbit in, say, the Proxima Centauri system would be a huge benefit, there is no way to make it happen given the current constraints on the payload, which relies on miniaturization and nonetheless requires vast energies to be brought up to cruising speed. Our initial interstellar efforts will surely be flybys for this reason, and there is a wealth of science that can be gathered.

The other thing to be remembered is that Breakthrough Starshot is an ongoing effort to demonstrate the feasibility of beamed laser sail technologies. Submissions from the first Requests for Proposals are being evaluated as sail stability and materials are considered by way of moving toward experimental work in what we can hope will be a dedicated sail facility. The laser array that would drive these craft presents huge challenges of its own, as do the many other issues, like communications, that will have to be resolved before any interstellar mission can be flown. 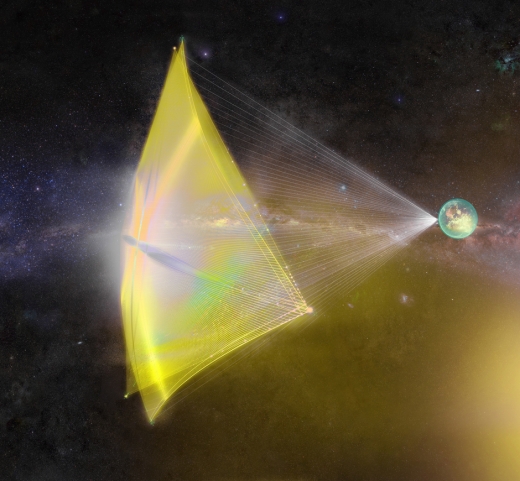 We’re looking at an interstellar capability that, if everything were to go well, would still take 30 years to produce a working infrastructure. To those new to Breakthrough Starshot, I recommend looking at the list of technical problems that face the project as it determines whether the concept is sound enough to move to prototype stage enroute to a full deployment. This is going to take time, and we won’t know for quite a while whether the Starshot concept, as is, is workable.

What we do already know is that the commitment of resources underlying the project is already paying off, and will continue to pay off, in the form of newly funded research.

Anyone familiar with the history of interstellar flight studies will know how rare it is to have this level of cooperation and participation among the scientists best equipped to tackle the problem. For most of the past century, researchers interested in the interstellar conundrum did their work in their spare time and met only at the occasional conference, with infrequent journal articles maintaining the thread. The research Breakthrough Starshot will produce will thus be a solid advance for the entire field, no matter if, when or how often the actual missions are flown.