The Prevalence of ‘Water Worlds’

The first time I ran into the term ‘water world,’ it had a seductive quality. After all, we think of habitable zones in terms of water on the surface, and a world with an overabundance of water suggested a kind of celestial Polynesia, archipelagos surrounded by a planet-circling, azure sea.

But we immediately run into problems when we think about planets with substantially more water than Earth. For one thing, we may have no land at all. Let’s leave aside the icy moons of our Solar System that may well contain oceans beneath their surface and concentrate on exoplanets in the interesting size range of two to four times the size of Earth. We have to ask what would happen if a planet were completely covered with water, with no run-off of nutrients from exposed rock. Such an ocean could be starved of key elements like phosphorus.

Or how about a planet with a high-pressure zone of ice effectively cutting off the global ocean from the rocky mantle? A world with enough water — 50 times that of Earth has been considered — could create enough pressure on the seafloor to prevent geological activity, blocking the kind of carbon-silicate cycle that adjusts the atmospheric composition we find here on Earth. Cayman Unterborn (Arizona State) thinks liquid water on the 5th planet in the TRAPPIST-1 system could be as much as 200 kilometers deep, 20 times deeper than the Marianas Trench. 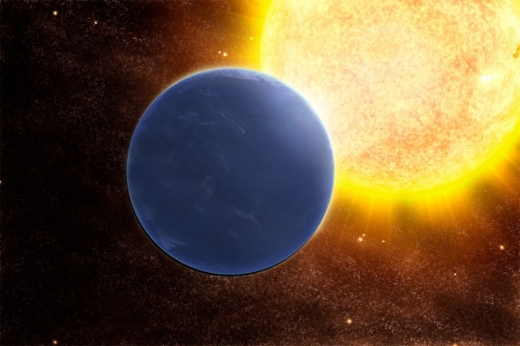 Image: A water world as envisioned in a photo-illustration by Christine Daniloff/MIT/ESO.

We don’t want to be too doctrinaire about this. For instance, Ramses Ramirez (Tokyo Institute of Technology) and Amit Levi (Harvard-Smithsonian Center for Astrophysics), have argued that there are ways to exchange greenhouse gases between deep sea ice and the atmosphere (citation below). In other words, we can have a carbon cycle without rock weathering, subject to a number of constraints like stellar type (hotter stars work best here) and rotation rate (thanks to Alex Tolley for his overview of this paper in private correspondence).

This is a work I hope to write about soon, but for now, let me quote from an essay by Shannon Hall on the topic that cites both Ramirez and Edwin Kite (University of Chicago), with a useful reminder from both on not being too quick to limit our thinking to Earth-centric models:

“What I’ve taken away from this project is the inadequacy of working from Earth’s analogy,” says Kite, admitting this conclusion is ironic given that he is a geologist by training. “I love rocks and Earth-history, but you really need to build up from basic physics and chemistry, rather than relying on Earth’s analogy in order to tackle exoplanet problems.” This consideration will be important when astronomers have to determine which individual worlds to further assess with large telescopes like the James Webb Space Telescope or when they have to choose between future missions that would survey hundreds of worlds and those that would study a handful of Earth clones in detail. But there is no consensus yet. “I think it could be dangerous just thinking about everything in an Earth-mindset,” Ramirez says. “You might be missing out on other possibilities.”

Exactly so, and when telescope time is precious, as it will continue to be for all our space-based resources in particular, target selection is critical. Meanwhile, I’ve run across the presentation that Li Zeng (Harvard University) and colleagues made at the recent Goldschmidt conference in Boston. The researchers point to data from both Kepler and the Gaia mission indicating that many known exoplanets may contain as much as 50 percent water. Here we can definitely toss the Earth-centric model out the window. Consider that Earth’s water content is 0.02% by weight. If these data are correct, huge numbers of exoplanets are entirely awash.

The model the researchers have developed tracks the changes in mass and radius when planets grow from a rocky core and later accrete either ices or hydrogen/helium gas, with the observed radius and mass-radius distribution reproduced in the model’s simulations. Many of the interesting planets in this range turn out to be water worlds.

“Our data indicate that about 35% of all known exoplanets which are bigger than Earth should be water-rich,” says Zeng. “These water worlds likely formed in similar ways to the giant planet cores (Jupiter, Saturn, Uranus, Neptune) which we find in our own solar system. The newly-launched TESS mission will find many more of them, with the help of ground-based spectroscopic follow-up. The next generation space telescope, the James Webb Space Telescope, will hopefully characterize the atmosphere of some of them. This is an exciting time for those interested in these remote worlds.”

On the larger planets, we can throw out my fanciful ‘Polynesia’ model. The researchers believe the surface temperature here would be in the range of 200 to 500 degrees Celsius. We would see an atmosphere dominated by water vapor, with a liquid water layer beneath, and high-pressure ices below. Our next generation of telescopes can put these ideas to the test.

The abstract for the Zeng et al. presentation at the Goldschmidt Conference, “Growth Model Interpretation of Planet Size Distribution,” is here. The Unterborn paper is “Inward migration of the TRAPPIST-1 planets as inferred from their water-rich compositions,” Nature Astronomy 19 March 2018 (abstract). The Ramirez and Levi paper is “The Ice Cap Zone: A Unique Habitable Zone for Ocean Worlds,” Monthly Notices of the Royal Astronomical Society 477, 4 (2018), 4627-4640 (abstract / preprint).