New Insights into Beta Pictoris b

Beta Pictoris b continues to instruct us in the ways of exoplanet finding. Consider: The young world was identified in 2008 through direct imaging via the Very Large Telescope at the European Southern Observatory site at Cerro Paranal (Chile). Actually seeing an exoplanet is no small feat. We are in this case talking about a bright A-class star some 63 light years away in the wash of whose light we can pick out a comparatively small planet. But it was also a young planet, putting out plenty of heat amidst the large debris disk, the first such disk ever imaged.

The earliest detections of planets around main sequence stars have involved radial velocity, using Doppler methods that can tell us the rate at which the star moves toward and then away from the Earth as it is affected by the planet orbiting it. But radial velocity is a tough call at Beta Pictoris because these changes are tiny, and we are dealing with a star those fast rotation and stellar pulsations obscure the needed signal. Radial velocity, in other words, is far more suited to planets in systems that are well beyond the early period of planet formation. 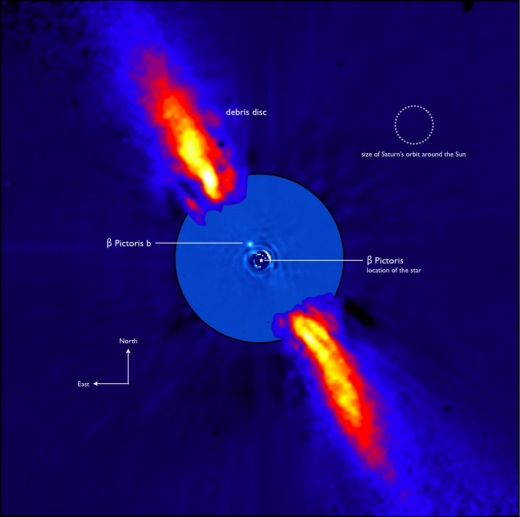 Image: The planet Beta Pictoris b is visible orbiting its host star in this composite image from the European Southern Observatory’s (ESO) 3.6-m telescope and the NACO instrument on ESO’s 8.2-m Very Large Telescope. The Beta Pictoris system is only about 20 million years old, roughly 225 times younger than the Solar System. Observing this dynamic and rapidly evolving system can help astronomers shed light on the processes of planet formation and early evolution. Credit: ESA.

Now we have what is being called the first successful estimate of a young planet’s mass taken by means of astrometry. Rather than measuring the star’s ‘wobble’ along the line of sight, as we do with radial velocity methods, the new astrometric data allow scientists to measure its deviations on the plane of the sky. Crucial to the work is a lengthy period of observation, which means taking advantage not only of data from the Gaia mission but also the older Hipparcos mission. The latter observed Beta Pictoris 111 times between 1990 and 1993.

Gaia’s second data release includes 22 months of observations, including 30 observations of Beta Pictoris. The combined measurements, examined by Ignas Snellen and Anthony Brown (Leiden University, The Netherlands) show the star’s long-term proper motion. Essentially, the scientists have measured the deviation from what would have been expected of a star without a planet, interpolating the mass of the planet from the size of this deviation.

“By combining data from Hipparcos and Gaia, which have a time difference of about 25 years, you get a very long term proper motion,” adds Brown. “This proper motion also contains the component caused by the orbiting planet. Hipparcos on its own would not have been able to find this planet because it would look like a perfectly normal single star unless we had measured it for a much longer time. Now, by combining Gaia and Hipparcos and looking at the difference in the long term and the short term proper motion, we can see the effect of the planet on the star.” 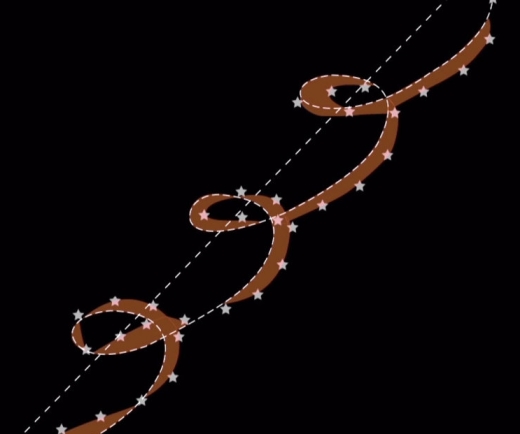 Image: Astronomers can measure the mass of exoplanets by looking at tiny deviations in the trajectories of their host stars caused by the gravitational pull of the orbiting planets. These can be observed either along the line of sight, looking for small changes in a star’s radial velocity, or on the plane of the sky, using astrometric measurements. To be able to make accurate assessments, the astrometric observations need to cover a period of many years. In this picture, the white dashed spiral shows the evolution of a star’s trajectory observable from the Earth, caused by the combination of parallax and proper motion. The brown band shows the range of deviations of the star’s trajectory caused by a possible planet orbiting it. Credit: ESA.

We learn from all this that Beta Pictoris b is a gas giant of between 9 and 13 times the mass of Jupiter. Useful in itself, the finding also highlights what we can expect from Gaia in the years ahead. Thousands of exoplanets are expected to be discovered in the course of the mission, but the tiny astrometric wobbles being sought can only be detected over sufficiently long periods of time, which is why the windfall of Gaia planets isn’t expected until late in the mission.

As to where this work fits in on the spectrum of young exoplanet studies, we see in Beta Pictoris b and other examples of young gas giants the chance to study the formation and evolution of such worlds. Thus far we have had no reliable mass measurements to distinguish between different formation models. The new Beta Pictoris b work implies a planet that has formed from gravitational instability, with disk gas collapsing to form the planet. Such a mechanism, with the infant giant planet retaining most of it initial entropy, is sometimes called a ‘hot start.’

The authors go on to point out that the collection of data leading to mass measurements for other young gas giants will help to constrain other models of early planetary evolution.

The paper is Snellen & Brown, “The mass of the young planet Beta Pictoris b through the astrometric motion of its host star,” Nature Astronomy 20 August 2018 (abstract).

Next post: A ‘Flyby’ Model for Early Solar System Evolution