The Gift of Fire

Humans are associative creatures, and it always amazes me how a single image or a particular scent can call up a memory on some completely different topic. Some associations are general: Most people associate Strauss’ magnificent Thus Sprach Zarathustra with Kubrick’s 2001: A Space Odyssey because of that movie’s spectacular opening sequence. For me, those powerful sounds likewise recall Apollo. Never forget that in April of 1968, we were getting ready for the first manned Apollo test, followed in almost bewilderingly short order by the grandest voyage then imaginable, the Apollo 8 circumnavigation of the Moon.

I always tie 2001 with Apollo and hear the Strauss in my mind whenever I think about Lovell, Borman and Anders reading so powerfully from Genesis that Christmas Eve. Reading Jeffrey Kluger’s brilliant Apollo 8 (Henry Holt, 2017) triggered the whole melange of memories and emotions. I’m sure people of a previous generation had their own deep associations when they heard about Lindbergh landing in Paris (Lindbergh, by the way, visited the Apollo 8 crew the night before the flight, and I sometimes wonder what kind of mental triggers went off in his mind when talking to these pioneers of another kind of voyaging).

Apollo 13 has its own associations, of bitter coffee as I sat compulsively re-reading newspaper articles the morning after the emergency had been made public, trying to take it all in. I was in a college student union and the coffee was terrible, but I just kept drinking it without noticing. God only knows how much coffee I drank, but I can tell you that a caffeine jag on truly terrible brew certainly didn’t help my mood that day in 1970. I love coffee, but it had better be fresh.

I have powerful associations with all the major space missions I’ve followed or written about, whether manned or unmanned. Voyager at Neptune makes me think of an owl outside the house late one night in 1989 as I tried to keep pace with live coverage of the encounter (much harder then than now, although as I recall PBS was on all night). Cassini surviving transit near the rings to go into Saturn orbit will always trigger memories of standing on a deck in a small midwestern house pointing out the planet to a young boy, the son of a friend, and all of us quietly looking at it with the thought that something human was now circling it.

Landing on Titan? I was totally wired when word came that the Huygens probe was descending under its parachute, a long, slow fall to an enigmatic surface. I had Lee Morgan’s ‘Sidewinder’ album on, a classic from a jazz trumpeter who died all too early (shot by his ex-wife in a jazz club!). I can’t hear Morgan’s riffs or the fine coloration of Billy Higgins’ drums without thinking of human technologies descending through Titanian haze, an exultant, frenetic energy. Associations like these are anything but rational; they’re more like a kind of internal jazz.

All this is in my mind because I was looking through the New Horizons site at the natural color images of Pluto and Charon that JHU/APL released at the end of July. Now New Horizons is an easy one. In my house growing up, there was an old encyclopedia — I can’t recall the publisher, though it wasn’t a common name, certainly not Britannica. The set predated Clyde Tombaugh and there was no Pluto to be found. I kept seeing the entry in that encyclopedia for ‘Solar System’ as New Horizons closed in on Pluto/Charon, and I could smell the rich mustiness of old, heavy paper and bound books rarely opened, a scent with its own kind of intoxication.

That scent is tangible to me as I look at the images below, showing the two worlds New Horizons so remarkably revealed. I wonder what associations Clyde Tombaugh might have had if he could have experienced the flyby from Earth (rather than ‘participating’ in it in the form of a small portion of his ashes being aboard the spacecraft). Would he see Kansas wheat waving in moonlight as he set up one of his telescopes as a boy? Or perhaps feel a desert wind around Lowell Observatory as he recalled taking time off from his work on the blink comparator? 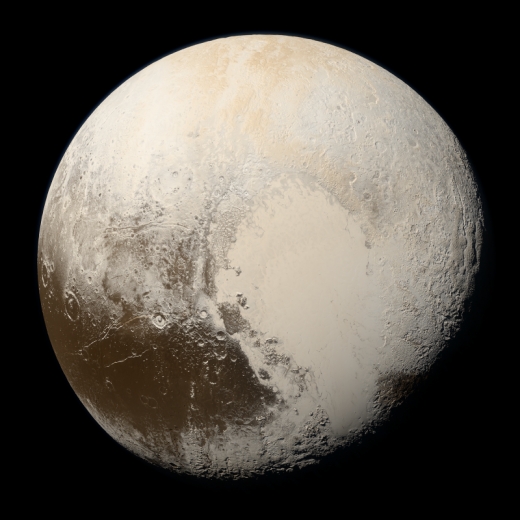 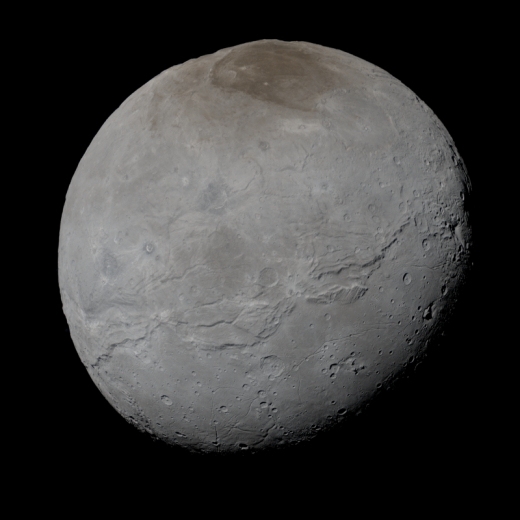 Image: These are the most accurate natural color images of Pluto (top) and its largest moon, Charon (bottom), taken by NASA’s New Horizons spacecraft as it approached the Pluto system on July 14, 2015. Each is a single color scan from the New Horizons Multispectral Visible Imaging Camera. The images here are not to scale; with a diameter of 2,370 kilometers, Pluto is about twice the size of Charon (1207 kilometers). Credit: NASA/Johns Hopkins University Applied Physics Laboratory/Southwest Research Institute/Alex Parker.

No one can predict what kind of memories will stick. The great essayist Michel de Montaigne devalued memory, which was highly prized throughout the European Renaissance. He relied instead, he tells us, on good judgment as the most important part of the human intellectual toolkit. I can’t agree, because for me, good judgment is inextricably bound up with memory. We are both what we learn and what we experience, the two tangled and woven into each other. In any event, New Horizons hit me emotionally and hard not purely because of the scientific return but also because it recalled years of growing up and wondering about Pluto.

We are, as Richard Feynman might have said, the sum of all our histories.

Now we prepare for the flyby of MU69, the object called Ultima Thule, on January 1 of the coming year, with the New Horizons team already readying the spacecraft for the encounter. The spacecraft is now in 3-axis mode, transitioning from spin mode on August 13. We’re 90 percent of the way from Pluto to the KBO as we prepare for the farthest exploration of any planetary body in history.

That’s the thing about space exploration. Not limited like the early sailing vessels to moving about on a finite sphere, we can hope to find something new in almost any direction as we push outward and keep going. We’re coupling digital technologies with human resourcefulness spiced by the kind of dreaming of the unknown that has inspired voyages of all kinds for centuries.

Inevitably, MU69 will trigger its own set of associations because we can’t stop the process even if we wanted to. We humans make memories like oysters make pearls, and memories shape character. Years ago I bought Michael Collins’ book Carrying the Fire in a Sun-flooded Missouri bookstore. Which reminds me of Plutarch, who said, “The mind is not a vessel to be filled. It is a fire to be ignited.” That’s a conflagration that is not easily smothered.