Meteorites have proven a useful tool for probing the nature of the early Solar System. Although I missed it at the time, Thomas Kruijer (University of Münster) and colleagues announced results last year from their study of the age of Jupiter based on measuring isotopes in meteorites. The age of Jupiter is an open question, but because current formation models have gas giants forming large solid cores and then rapidly accreting gas, the assumption is that the circumstellar disk could not have been depleted of its gas by the time Jupiter’s formation was complete.

A gas giant must form, in other words, fairly rapidly, and the Kruijer paper offered a deeper look into the conditions of the surrounding disk during the process. The researchers were able to identify “…two genetically distinct nebular reservoirs that coexisted and remained spatially separated between ~1 My and ~3-4 My after Solar System formation.” Even that early in the formation of the Solar System, two bands of relatively small bodies had emerged.

We can imagine Jupiter growing and becoming the blocking factor between the inner and outer parts of the circumstellar disk. The idea has triggered further work from Yann Alibert (University of Bern), working with a team of researchers from both the University of Zürich and ETH Zürich, who delve into a gas giant formation model that adds considerable detail to older concepts.

A Jupiter growing from 20 to 50 Earth masses would explain the Jupiter ‘barrier,’ for it would create a higher density of dust that could trap pebbles outside its orbit. The separation would remain for a time because only when the planet grew large enough would it reach the amount of mass necessary to perturb pebbles, rocks and other debris inward, thus mixing the regions. 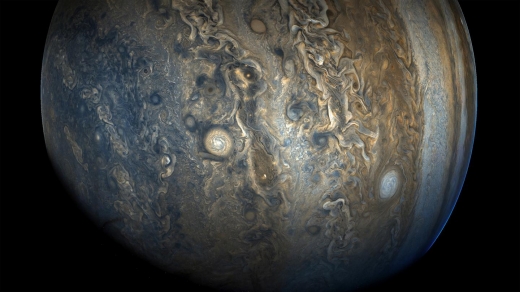 What Alibert and team didn’t like was the timing, which the meteorite data indicated was a two million year window. “How could it have taken two million years for Jupiter to grow from 20 to 50 Earth masses?” asks Julia Venturini (University of Zürich). A good question, and one from which the Alibert study grew. Out of this dissatisfaction has emerged a three-part model based on the idea that different kinds of bodies contribute mass and energy as the planet forms.

What we have lacked before now is an idea of the size of the accreting materials. In the Alibert model, the process works like this: Growth of the planetary embryo begins by accreting pebbles at the centimeter scale, building a core during an initial period lasting about 1 million years. A period of slower accretion — this time of rocks at kilometer size, or planetesimals — now follows. This period lasts 2 million years, and accounts for the period that turns up in the Kruijer meteorite studies.

As planetesimals strike the young, growing planet, they impart heat and energy. Says Alibert: “During the first stage the pebbles brought the mass: In the second phase, the planetesimals also added a bit of mass, but what is more important, they brought energy.”

This energy is crucial to the model, because it heats the atmosphere of the infant Jupiter enough to prevent contraction as well as further gas accretion. This delay in gas accretion allows slow the growth from 20 to 50 Earth masses and fits nicely with the meteorite data. It explains why the time the planet spent in this mass range was so unexpectedly long.

In 3 million years, Jupiter reaches 50 Earth masses, and at this point, the third phase of formation can occur, dominated by runaway gas accretion and building toward a planet that is what we see today, a giant of 300 Earth masses. Jupiter could be said, then, to have had a period of ‘arrested development’ as kilometer-sized blocks injected high energy, slowing the accretion of gas. Small pebbles build a core, planetesimals provide heat that delays gas accretion, which finally takes off as the planet cools and swells toward its current size. 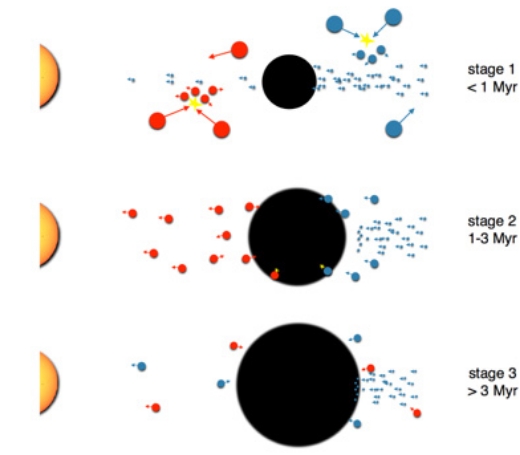 This multi-phase hypothesis for gas giant formation explains how the division between inner and outer Solar System found so early in the data could arise during the 2-million year window, and also explains why the growth rate could be so slow. From pebbles to planetesimals, the new gas giant theory could offer insights as well into exoplanet formation. But will it fit other planets in our own Solar System? Applying these concepts in particular to Uranus and Neptune should be interesting, but Alibert and team think the data fit. We should see future work on the idea.

The paper is Alibert et al., “The formation of Jupiter by hybrid pebble–planetesimal accretion,” Nature Astronomy 27 August 2018 (abstract). The Kruijer paper is “Age of Jupiter inferred from the distinct genetics and formation times of meteorites,” Proceedings of the National Academy of Sciences Vol. 114, Issue 26 (June, 2017). Abstract.