Transiting Debris around a White Dwarf

Who among us hasn’t speculated about the ultimate fate of the Solar System? The thought of our Sun growing into a vast red giant has preoccupied writers and readers since the days when H. G. Wells so memorably captured a far future scene through the eyes of his Time Traveler. And what a scene that was:

“I cannot convey the sense of abominable desolation that hung over the world. The red eastern sky, the northward blackness, the salt dead sea, the stony beach crawling with these foul, slow-stirring monsters, the uniform poisonous-looking green of the lichenous plants, the thin air that hurts one’s lungs: all contributed to an appalling effect. I moved on a hundred years, and there was the same red sun—a little larger, a little duller—the same dying sea, the same chill air, and the same crowd of earthy crustacea creeping in and out among the green weed and the red rocks. And in the westward sky, I saw a curved pale line like a vast new moon.”

Wells was working on a different timescale than we now know to be the case, but we track his protagonist in leaps of a thousand years each as he moves into the future, “…drawn on by the mystery of the earth’s fate, watching with a strange fascination the sun grow larger and duller in the westward sky…” He catches the transit of a planet across the swollen Sun but doesn’t know which it is — so distorted appears the Solar System in the sky above that he wonders if Mercury is not near the Earth in this era, an inner planet imperiled by its own monstrous star.

It’s lively stuff, and demands translation into our current understanding of stellar evolution: What does happen to our system’s planets when the Sun expands to red giant stage? One way of looking into this is to see what we can find around white dwarf stars, the ultimate destinations of stars in the Sun’s mass range after the red giant era ends. At this point, our star will have lost its outer layers, leaving only a comparatively tiny, dense core.

Back in 2015, Andrew Vanderburg (Harvard-Smithsonian Center for Astrophysics) and colleagues published their findings about the white dwarf WD 1145+017, located in Virgo about 570 light years from Earth. The researchers were working with data from the rejuvenated K2 mission, which revealed that light from the star was periodically dimmed by a series of objects. The rocky bodies responsible were, the paper suggested, disintegrating, leaving traces of calcium, iron and aluminium on the white dwarf’s surface. 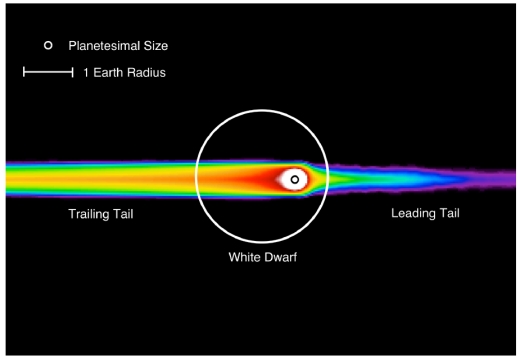 Image: A schematic of the trailing and leading cometary tails from the disintegrating planetesimal compared to the White Dwarf host size. Figure from Vanderburg et al. (2015).

Now we have further insights into the same star from a team led by Paula Izquierdo of the University of La Laguna, Spain, who went to work on the white dwarf using the Gran Telescopio Canarias (GTC) and the Liverpool Telescope (LT). The method was fast optical spectrophotometry and photometry, analyzing the acquired spectra as a function of wavelength. With data from both telescopes, the objects around WD 1145+017 have been captured making two deep transits.

What emerges is that there is a lengthy period between the beginning of the transits and their end, one that is consistent, according to the researchers, with a comet-like tail. This fits with the earlier work of Vanderburg and team, who believed they were seeing the signatures of dust and gas clouds being produced from solid fragments on a roughly 4.5 hour orbital period. Moreover, there is a noteworthy timing feature that the paper explains, with an interesting comparison:

We note in passing that the six times of transit minimum are roughly equally spaced in time, with an average separation of 6.2±1.1 min. The nearly equal spacing of these bodies is reminiscent of the string of fragments of comet Shoemaker-Levy 9 (Weaver et al. 1994).

The famous ‘string of pearls’ comet may thus have an analogue around a distant white dwarf, or else, says the paper, we are seeing evidence of a dense debris cloud, or multiple clouds, extending 120° in azimuth. The authors find that WD 1145+017 has a mass of 0.63 ± 0.05 Solar masses and a cooling age of 224 million years, plus or minus 30 Myr. The ‘cooling age’ is a reference to the white dwarf’s age as a degenerate star; it does not, in other words, include its long span as a main sequence star and the red giant phase that would have followed it. 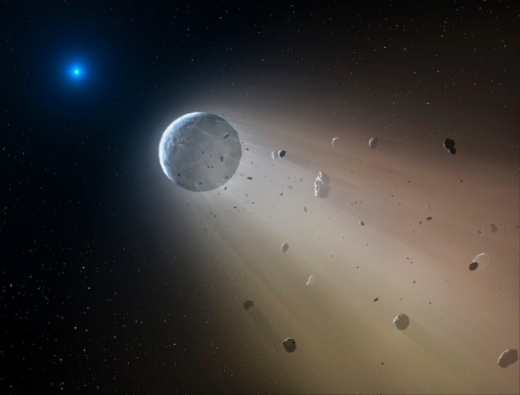 Is this the fate of our own Solar System, to be shredded into clouds of debris around a slowly cooling white dwarf? For decades, we’ve known that the surfaces of some white dwarfs are rich in metals, possible debris from the original system. Now we can push that speculation further, in this case aided by useful transit signatures. This is a lengthy process, as the authors of the Izquierdo study note in relation to WD 1145+017, but one with a clear path for future work:

The decrease in the strength of the circumstellar line provides no information on the relative location of gas and dust along the line-of-sight towards the white dwarf. Time-resolved spectroscopy with a higher signal-to-noise ratio has the potential to provide further insight into the geometry of the gas and dust within WD 1145+017.

Next post: New Horizons: Checking in on Approach Operations