Proxima Centauri b: The Habitability Question

Proxima Centauri b is back in the news, although I’ll confess that in my case, it’s rarely out of my thoughts — I’ve been obsessed with the Alpha Centauri system since my youth. The latest comes through work by Anthony Del Genio and colleagues (NASA GSFC), who describe in Astrobiology their new simulations with regard to potential habitability.

You’ll recall the issues here. A planet this close to its host star may well be tidally locked, with one side always facing the M-dwarf Proxima Centauri. Martin Turbet (Sorbonne Universités, Paris) and colleagues described possible climates on Proxima b in a 2016 paper, using a 3D climate model (GCM) to simulate the atmosphere and water cycle of the planet for its two possible rotation modes, a 1:1 and a 3:2 spin resonance (in other words, gravitational forces could keep Centauri b locked to Proxima or rotating 3 times for every 2 orbits of the star).

The Solar System offers analogues: The Moon is in a 1:1 spin resonance with the Earth, while Mercury is in a 3:2 spin resonance with the Sun. What Del Genio and company bring to the table is a model that incorporates these resonances and a global climate model but also includes the effects of an ocean that can transfer heat from one side of the planet to another.

The addition of this dynamic ocean modeling gets us to an interesting outcome: Rather than, as with the Turbet paper, finding an entirely frozen dark side, with a star-facing side that has at least some potential for a sea, Proxima b may have conditions allowing for an equatorial zone of liquid water even on the dark side, with large open ocean possible elsewhere.

This result improves the odds on habitability, as Del Genio is quoted as saying in an article called The Closest Exoplanet to Earth Could Be “Highly Habitable.” An ocean-covered Proxima b with an atmosphere like Earth’s could have open oceans that extend into the dark side, at least at low latitudes, and this turns out to be true both for synchronous rotation and a 3:2 spin-orbit resonance with a somewhat eccentric orbit. 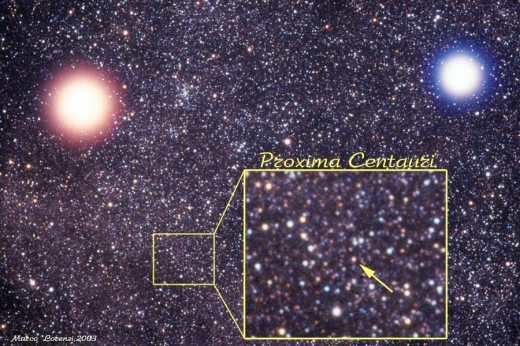 Image: An image of the closest star to the Sun, Promixa Centauri, and its surrounding field of stars. Note that Centauri A and B both appear as a single ‘star’ here, their light combined in the bright object at the left. The bright star on the right is Beta Centauri, which is not a part of the Alpha Centauri system and is much further away from Earth. Credit: Marco Lorenzi.

But in going through the paper, I think it’s important to note that the researchers also derive much colder temperatures than previously suggested, the result of the transport of oceanic heat around the surface. Let’s look at how the paper treats this outcome with reference to Earth:

Because of its weak instellation, however, Proxima Centauri b’s climate is unlikely to resemble modern Earth’s. “Slushball” episodes in Earth’s distant past with cold but above-freezing tropical oceans (Sohl et al, 2017) are better analogs. The extent of open ocean depends on the salinity assumed. Elevated greenhouse gas concentrations produce some additional warming, but this is limited for any M-star planet by the reduced penetration of near-infrared starlight to the surface, and for Proxima b in particular, by its existence near a possible dynamical regime transition.

Unlike Turbet and team, Del Genio’s paper rules out a single ocean at the substellar area — this is sometimes called the ‘eyeball Earth’ scenario — because their dynamic ocean models show enough heat transport to allow water to exist on a wider basis. But note the effect of salinity, which determines the temperature at which seawater freezes. Modeling different levels of salinity in their various simulation scenarios (which also varied atmospheric composition), the scientists found that at high salinity, broad regions of open ocean occur and little ice.

We may have a Proxima b that is habitable but in terms that are starkly different from Earth:

…if we think more broadly about what constitutes a habitable planet (Cullum et al., 2016), it is reasonable to imagine a cold but inhabited Proxima Centauri b with a very salty shallow remnant of an earlier extensive ocean in which halophilic bacteria are the dominant life form, especially if the ocean is in contact with a silicate seafloor (Glein and Shock, 2010).

In an interesting discussion of other exoplanets at the end of the paper, the researchers consider TRAPPIST-1 e, LHS 1140 b, GJ 273 b and other worlds in the context of their models. The point could not be clearer: We are steadily building our inventory of potentially habitable rocky exoplanets around M-dwarfs. Where this paper points is toward continued refinements to climate modeling as we anticipate our first atmospheric detections and characterizations.

Calling the Del Genio paper “a very exciting result indeed,” Guillem Anglada Escudé (Queen Mary University of London), who led the team that discovered Proxima b, likewise pointed to nearby M-dwarf systems and the likelihood that their planets would be rich in water. By ‘rich,’ we are talking about 10-30% in water content, as opposed to < 1 percent for Earth.

The problems of atmosphere retention through early tidal heating and later erosion due to stellar flares and a strong stellar wind are serious and we cannot rule out the possibility that they would make habitability impossible. Anglada Escudé noted these issues in an email this morning, but continued:

“The paper (necessarily) needs to make a large number of assumptions, but this is very important work as it points towards the observational probes that we should soon be able to apply to these planets (temperature, thermal environment, atmospheres rich in water vapor, or whatever). As usual, we would like to see a few more of these simulations by independent teams to obtain a better perspective on the landscape of possibilities.”

Where to next with this research? Anglada-Escudé adds:

“As a shopping list of things that I would like to see from our modeller colleagues, it would be great to see some of these models coupled with erosive effects from stellar activity on the upper atmosphere, and the resulting exotic atmosphere we might expect. That is, even if large chunks are eroded due to a particularly violent coronal mass ejection or flare, the ocean would possibly outgas a new one quickly.”

The paper adds that we have some analogues in our own Solar System to seas of high salinity like those modeled here. Europa, for example, is thought to contain such a sea, as is Enceladus. Interestingly, we can’t observe life signatures within these bodies without going there, setting up a situation in which we may detect — within a few decades — biosignatures on an exoplanet before we find signs of life beyond Earth in our own Solar System.

The paper is Del Genio, “Habitable Climate Scenarios for Proxima Centauri b with a Dynamic Ocean,” published online at Astrobiology 5 September 2018 (preprint). The Turbet paper is “The habitability of Proxima Centauri b II. Possible climates and observability,” Astronomy & Astrophysics Vol. 596, A112 (December, 2016). Abstract