Ceres: Of Ice and Volcanoes

We’ve only orbited one object in the Solar System known to exhibit cryovolcanism, but Ceres has a lot to teach us about the subject. Unlike the lava-spewing volcanoes of Earth, an ice volcano can erupt with ammonia, water or methane in liquid or vapor form. What appear to be cryovolcanoes can be found not only on Ceres but Titan, and the phenomenon appears likely on Pluto and Charon. Neptune’s moon Triton is a special case, with rugged volcanic terrain in evidence, as opposed to much smoother surfaces without obvious volcanoes elsewhere.

Activity like this can be a good deal less dramatic than what we see on Earth, or spectacularly on Io. The eruption of an ice volcano involves rocks, ice and volatiles more or less oozing up out of the volcano to freeze on the surface, a process thought to be widespread on Ceres. But what happens to cryovolcanoes as they age? Ahuna Mons, an almost five-kilometer tall mountain that is no more than 200 million years old, raises the question. Why is it so tall, and why, assuming other cryovolcanic activity on this surface, are there no other mountains this imposing? 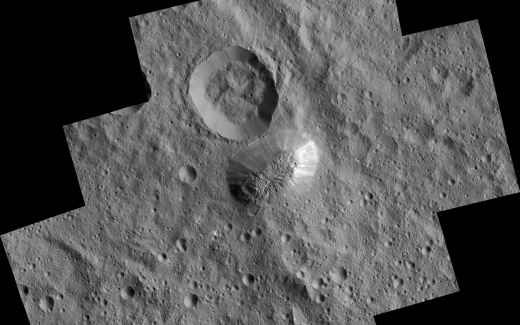 Tackling the question of cryovolcano evolution is Michael Sori (University of Arizona), working with colleagues at UA and elsewhere to advance a theory they call ‘viscous relaxation.’ The idea here is that the rock and ice making up Ceres can flow in much the way that glaciers flow on Earth, with the ice/rock balance affecting the flow rate. Also a key factor: The temperature, which on Ceres never warms higher than -35 degrees Celsius. A cryovolcano at the poles, in other words, would ‘relax’ at a much slower rate than a warmer mountain at the equator. 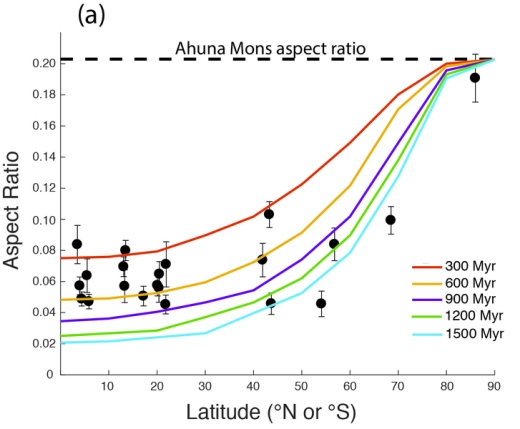 Image: Each curve represents a cryovolcano of a different age and shows that mountains at low latitudes close to the equator flatten out at younger ages than mountains located at high latitudes at the poles, where they will maintain their height and width for eons. Credit: Michael Sori.

The youthful Ahuna Mons would have been active in the geologically recent past. In a paper published in 2017, Sori’s team used numerical models to predict the flow velocity of the cryovolcano, which they derive as 10-500 meters per million years given the variables of ice content, rheology (the deformation and flow of matter), grain size, and temperature. Flows at the slow end of this range can relax a cryovolcanic structure over 108 to 109 years, a rate sufficient to allow Ahuna Mons to remain identifiable today.

Older cryovolcanoes, having gone lengthier periods of relaxation, become shorter, wider and more rounded with the passage of time. The trick is to identify ancient cryovolcanic structures on today’s surface. In a paper just released in Nature Astronomy, the scientists used their computer simulations as the context in which to scan Dawn data on Ceres’ topography.

22 surface features matched the simulation’s predictions, including Yamor Mons, an old polar mountain five times wider than it is tall. Mountains elsewhere on the surface of the dwarf planet have lower aspect ratios; that is, they are much wider than they are tall. Sori’s team was able to use the simulation/data match to estimate the age of many volcanoes and their volume.

Viscous relaxation as modeled here allows the researchers to derive the rate at which cryovolcanoes form, which turns out to be one every 50 million years. Ceres shows signs of cryovolcanism throughout its history, making the process an important factor in its geological evolution, though less so than the kind of volcanism found on terrestrial planets. Depending on latitude, modeled volcanoes begin tall and steep, but grow short and wide over time.

This passage from the 2017 paper summarizes the process of cryovolcano evolution. Note the acronym FEM, standing for ‘finite element method,’ a reference to software code originally developed for the study of the movement of ice on Earth and used in these simulations

Viscous flow of topography is a modification mechanism that can describe the presence of a single, young, prominent cryovolcano (Ahuna Mons). Flow velocities are fast enough to heavily modify structures on timescales of tens to hundreds of million years, shallowing their topographic relief and providing an explanation for why Dawn observations have not yet identified a plethora of cryovolcanoes. Flow velocities are not so fast that the observed near-pristine state of Ahuna Mons becomes problematic. Domes must be more compositionally ice rich than the average Cerean crust to flow, which is a reasonable property for a cryovolcanic construct. Our hypothesis works with any volumetric fraction of ice > ~40%, but we favor the lower end of this range because past studies do not favor a pure-ice composition for Ahuna Mons. Cerean cryovolcanism involving cryomagma that is approximately half water by volume fits both Dawn observations and our FEM models. 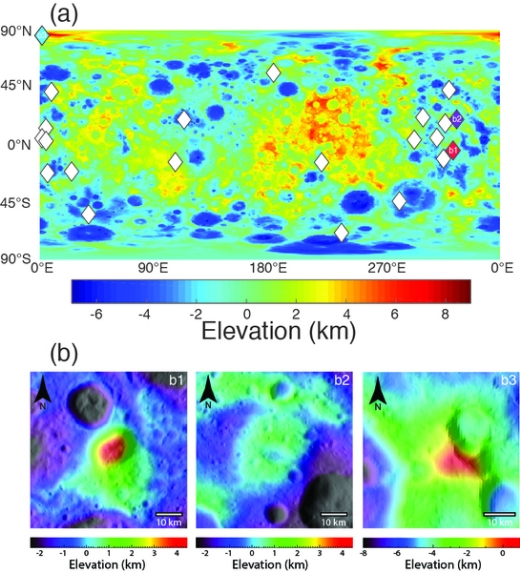 Cryovolcanoes aren’t dramatic. We substitute an ooze of cryomagma, a mixture of rock, salty ice and volatiles, for explosive eruptions. Freezing on the surface, the cryomagma eventually rises into peaks like Ahuna Mons before the inevitable relaxation as geological ages pass. How and why the cryovolcanic activity occurs just where it does is a question for future research, and one that may be illuminated by studies of the ice volcanoes elsewhere in the Solar System.